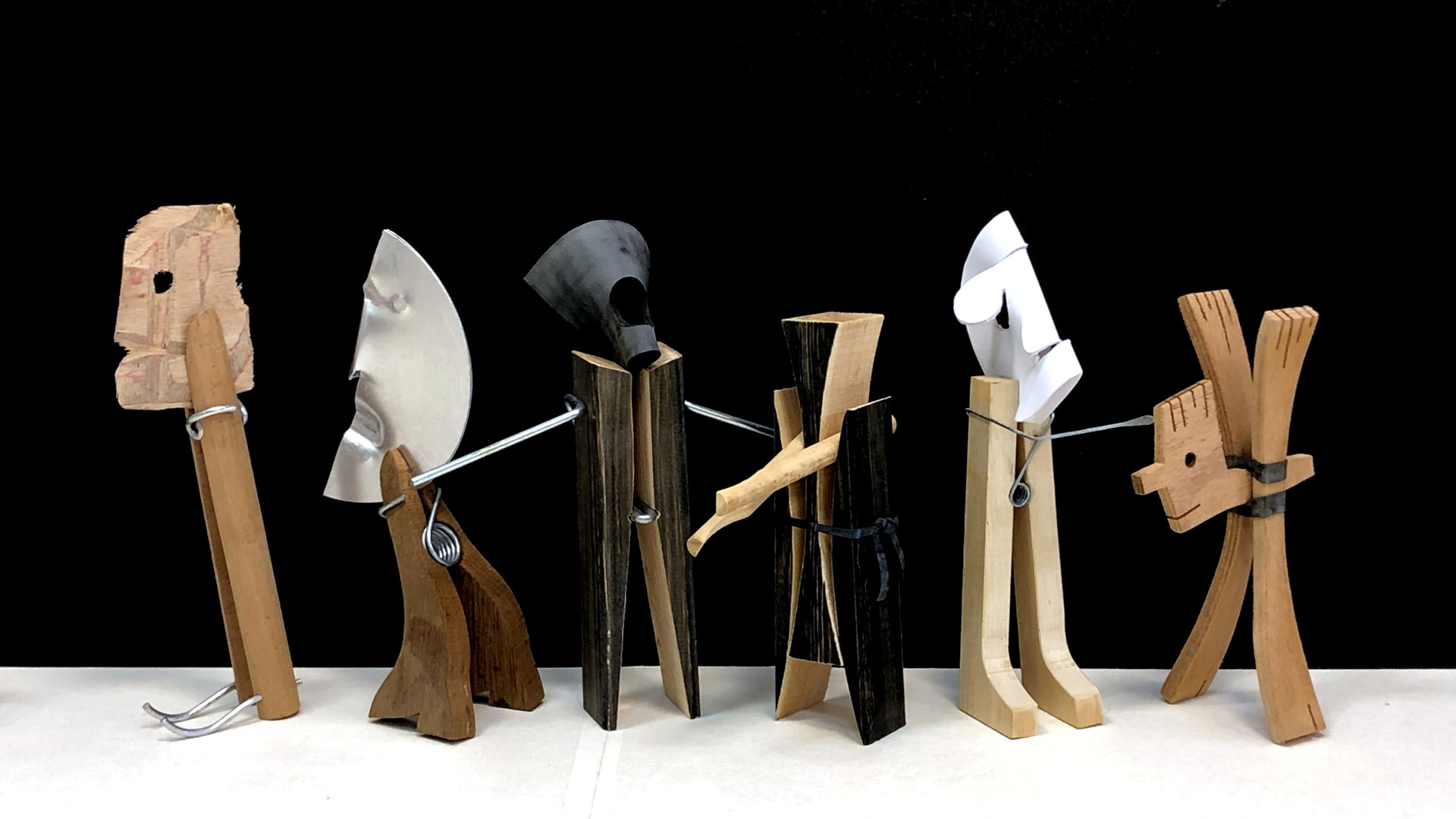 Figurines from the Studio of Yaacov Kaufman

When Yaacov Kaufman encounters a metal wire, clothespin, blank page, or discarded scraps of wood and metal, the wheels in his head start turning and his imagination takes flight. He sees a small human figure – man, woman, or child – in each material and remnant. Kaufman, an artist and industrial designer, takes the piece of wood or cardboard and drills an eye, cuts a mouth, twists a hand, strings a bead and magically a figure emerges. The exhibition presents more than one thousand figures created deftly by Kaufman using simple, every-day materials: wood, cardboard, and metal, balls, rings, and loops which he cuts, sands, connects, drills, molds, wraps, ties, and threads. At times he incorporates their existing mechanisms (such as a clothespin, lock, or door hinge) and adds color and decoration through beads, stings, and elastics.

Through these materials Kaufman engages in a dialogue with ancient history and world cultures, with prehistoric figurines, ritual statues, and tribal masks. The moment prehistoric man carved two grooves into a stone he distinguished that stone from all others, transforming it into a rounded two-eyed figure. Kaufman’s figurines function similarly; representing the wondrous act of produced something from (almost) nothing. Though many of the figures are minimalistic and some abstract, they figures are exude character and often elicit a humorous response.

Kaufman began making these figurines in 2000–03 and continues to do so today. Over the years he has been preoccupied by a range of questions, most of which he summarizes in one word: “formation.” What is the smallest possible action required to make a material resemble a body or face, to create human figure? How do we manipulate an existing shape and when should it be modified? Which is more important: body or face? When should a figure be isolated and when should it be accompanied by a family, tribe, or community?

The exhibition displays a vast collection of original characters; their body language is surprising and the ways in which they are connected to each other evoke a wealth of imaginary scenarios. Moving among the exhibition’s different categories offers shifts in perspectives on materials, techniques, and on relationships and scenes recognizable from our own daily lives. As we view even the most abstract figures as part of a group, our minds complete the missing elements and they emerge as fully human characters.

Kaufman studied figurative and abstract sculpture, though for years he abandoned the replication of reality in favor of abstraction and industrial design. His figurines reveal his sculptural knowledge, and are unapologetically realistic. All that we must do is fulfill his wish “to see the works through the eyes of another.”

In addition to presenting the rich world of Yaacov Kaufman’s figures, this exhibition invites the viewer into the artistic process, revealing the magic behind the creative act, and illuminating the potential hidden in every simple object.