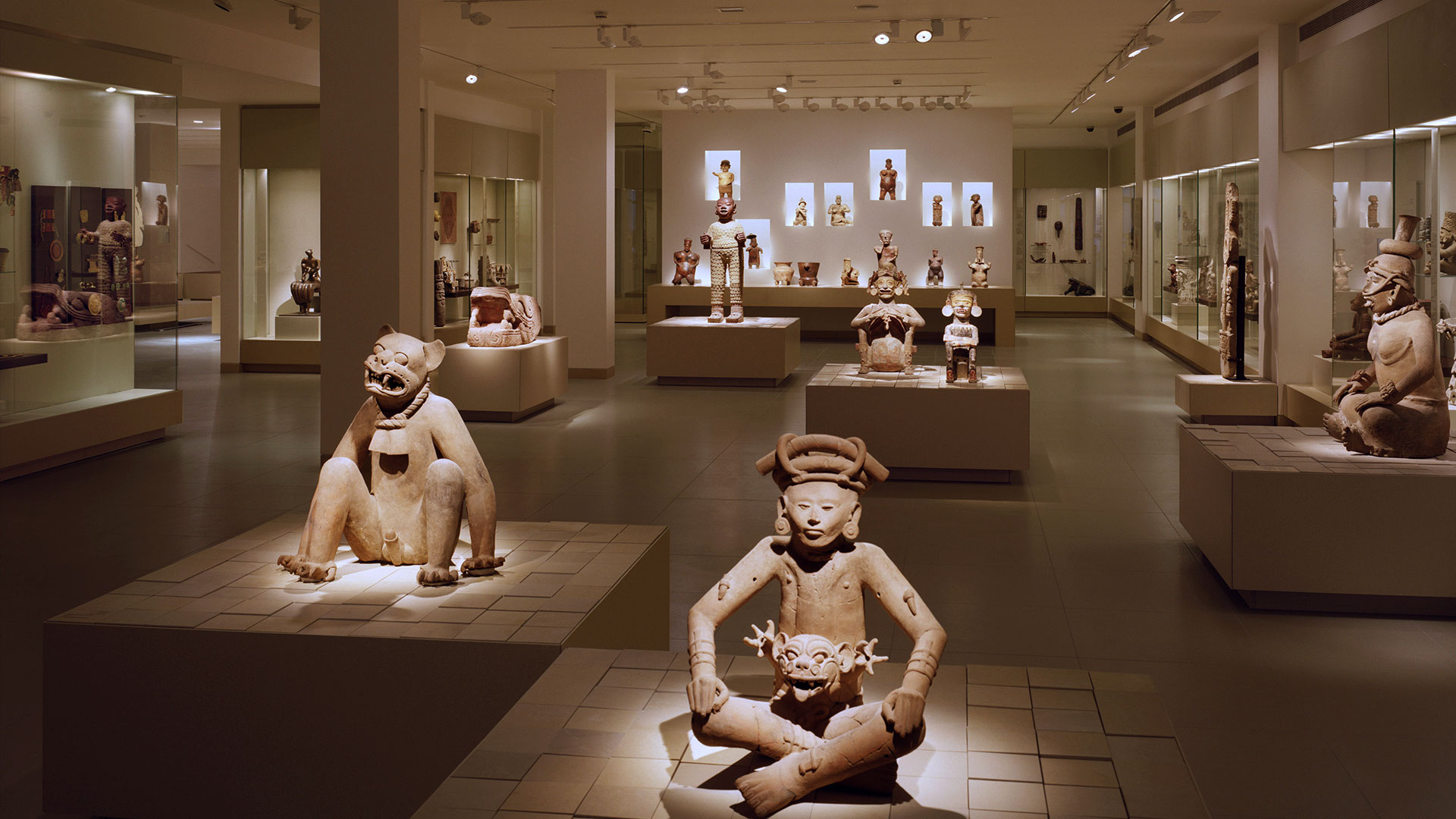 Art of the Americas

The permanent exhibition of the Art of the Americas explores the symbolic and aesthetic traditions of the civilizations that flourished in America long before the European conquest and continue to thrive to this day. These cultures, erroneously called by Christopher Columbus “Indian”, include many different peoples, of distinct origins, languages and cultures. The display wishes to shed light on these people’s works revealing the ideas and belief systems that they shared and their distinctive characteristics that set them apart. 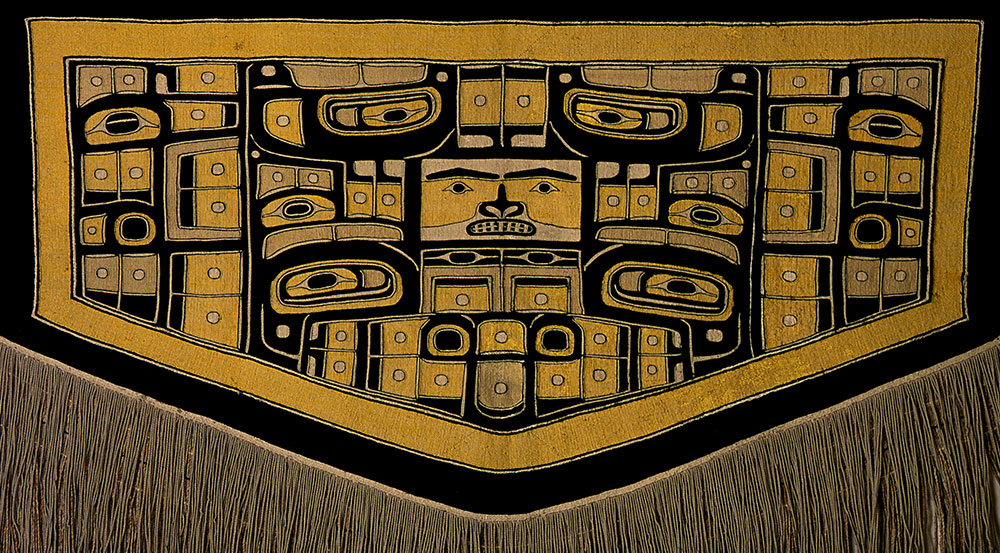 In the early 16th century, when Europeans first encountered the peoples of North America, some 1,000 peoples and tribes, speaking more than 200 different languages, inhabited the continent. These distinct peoples ranged from simple hunter-gatherers to irrigation farmers; from nomads to villagers and town dwellers; and from loose, unstructured bands to stratified societies, centralized chiefdoms, and full-fledged nations.

Despite their cultural differences, the Eskimos and Aleut of the northern latitudes, the Pueblo and Navajo of the Southwest, and the Tarahumara of North Mexico all share a common worldview: they believe in the sanctity of nature and the need for balance and harmony between human beings, their environment, and the universe, from the heavens to the earth and to the underworld.

The strong affinity between man and nature can be seen in a ceremonial mantle, on display in the gallery. The garment is decorated with highly stylized animal crests - bears, killer whales, and other creatures - who came to the aid of the clan’s ancestors and are thus associated with its mythological origins. This affinity to nature is also evident in af Kachina dance mask made by the Hopi people, living in Arizona, United States. The Kachina masks were carefully carved to represent specific spirits, whose role it was to bring rain, crops, fertility and supernatural protection. They were worn and personified in the dances held each year at the beginning of the summer season.

In the late 17th century, when the Europeans established their colonies in North America, tribes and nations suffered devastation; only in areas beyond colonial settlement did the native population survive intact. These 14,000-year-old peoples underwent a sudden and profound transformation. Horses, firearms, hard metals, and others, all previously unknown to them, became part of their culture and continued to express their identity and cultural heritage. A new material which was incorporated into art is glass beads, as can be seen on the Kiowa warrior’s war shirt. The heavily beaded sleeves and shoulder bands are marks of merit.

Mesoamerica – the term that denotes the world known to the Aztecs – was the most highly developed region in the Americas. For 3,000 years, until the arrival of the Spanish in 1519, a series of civilizations – Olmec, Maya, Zapotec, Teotihuacan, and Aztec – inhabited this area, sharing a system of beliefs and practices.

These people had a rich spiritual world. They wrote and recited poetry, they recorded their chronicles and dynastic genealogies. A good example for this activity is in the lintel bearing a royal inscription commemorating the birth of the youngest son of King Chak Naab Kaan, of the Maya culture, on January 10 660 CE.

One of these kings is King Pakal 1, renowned for his impressive buildings. His sculpture shows him wearing a bird mask and headdress and holding the royal scepter with a two-headed snake.

Alongside poetry, agriculture and architecture, people of Mesoamerican cultures excelled in the understanding of astronomical phenomena, formulated sophisticated techniques for measuring time, and devised complex pictographic and hieroglyphic writing systems. They also invented the ball game: This game, in which two teams compete for control of a rubber ball, has mythological roots and was used to solve disputes and even instead of wars. The playground where they met was a holy place: it was the playground of the gods.Stone sculptures of the mythological gods and heroes related to the game are on display in the gallery. The Palma - an object originally made of wood or canes and worn by the players - shows a priest in a sacrifice scene. Alongside  are shown sculptures of players and the oldest and most complete target post found to date.

Mesoamerican art served cultural and political goals, establishing exemplary patterns. It presented idealized concepts of authority, of cyclical time, and of the relationship between human beings and their ancestors or between humans and cosmic forces. This transcendent art fulfilled both a social and a religious role, in daily rituals, major ceremonies, and deity and funerary cults.

Centuries later, this art would inspire the sculptor Henry Moore, the architect Frank Lloyd Wright, the painters Diego Rivera and Frida Kahlo, and many other modern artists and architects.

In October 1492, Christopher Columbus reached the “New World,” made his first landing on an island in the Bahamas, and was greeted by native people. In less than a century, the Taino and Carib peoples had been annihilated, the victims of aggression and European diseases. A similar fate befell the societies in the Isthmus of Panama. These cultures are known to us through ethno-historical accounts, archaeological finds, and works of art.

In the Caribbean region (Cuba, the Dominican Republic, and the Antilles) and in the southern part of Central America (Nicaragua, Costa Rica, and Panama), the earliest evidence for the existence of chiefdoms – several villages governed by a single ruler – dates back to 3000 BCE. Though the area acted as a bridge between Mesoamerica and South America – and, from the 16th century on, also between Europe and the rest of the Americas – no major urban civilizations developed there. Nevertheless, its inhabitants produced very fine stonework and ceramics, as well as precious objects in gold and jade. These artworks gave visible expression to fundamental beliefs concerning the order of the universe and the power of shamans; they accompanied and depicted rituals; and they testified to the status of sacred leaders.

Art of South America: Dialogue of Art and Nature

Apart from their ability to survive and prosper in challenging environments, the peoples of South America also devoted great energy to the aesthetic dimension of life. They built intricate monuments and vast cities, they wove superb textiles and crafted delicate gold work. While South American art dating from as far back as the 10th millennium BCE has been preserved, the highly sophisticated civilizations began to emerge around 3000 BCE, culminating in the Inca Empire that came to an end in the 16th century.

In South America, art was a collective effort, the result of a process in which specialized skills were applied to well-honed formulas. Because these cultures had no systems of writing, objects became a major source of information. Two Kero beakers from the Lambayeque culture, Peru, depicting the Sican divinity, are a good example. They were used for drinking chicha (maize beer) during ritual ceremonies. They were made in pairs, and two people would drink from them at the same time. As a symbol of the mutual relations between them, each would grasp a vessel and, drawing closer together, they would entwine the arms holding the keros and drink.

Like other Precolumbian societies, the Andeans believed that human beings were inseparably connected to the forces of nature. Their lives revolved around agriculture, and they marked the annual rain cycles with festivities and mountain pilgrimages, rituals that sustained the bonds with ancestor spirits and with the life-giving powers of the earth and the sky. A metaphoric clay pot from Peru, on display in the gallery, combines three different creatures symbolizing the three realms: the human body represents the earthly world; the tiny bird, the upper world; and the serpent, the underworld, the world of the dead. The snake lives inside dark caves, goes out onto the ground, and climbs trees, thus moving between the three realms and connecting them.

Colonialism: A Collision of Civilizations

The year 1492 marked the start of one of the most dramatic cultural encounters in history: the confrontation between the peoples of Europe and of the Americas, who until that point had been unaware of each other’s existence. This encounter's effect on the indigenous American populations would be profoundly traumatic.

What Europeans described as discovery and conquest of the New World was experienced by the Americas' ancient peoples as an invasion accompanied by exploitation, enslavement, the imposition of foreign values, and forced religious conversion. The coming of the Spanish, Portuguese, British, French, and Dutch disrupted or destroyed ways of life that had existed for millennia, and often resulted in the annihilation of entire populations. The Europeans then brought in African slaves, of whom 90% settled in Portuguese and Spanish colonies. The flourishing of colonial society was built upon the grueling labor of these slaves, who left an African imprint on the Americas.

At first, European Christian art was imported to the colonies, to be followed by the artists themselves. Later on, artists who were native or mestizo (of mixed European and native American ancestry) displaced them, working under the supervision of missionaries. Eventually these artists formed independent guilds with distinctive local styles, such as the Peruvian Cuzco School established in 1688. Art and religion remained inseparable for the ancient peoples, and their works combined Catholicism with enduring Precolumbian concepts. Some of these beliefs continued uninterrupted, and today efforts are being made to revive and preserve the ancestral heritage of the Americas.