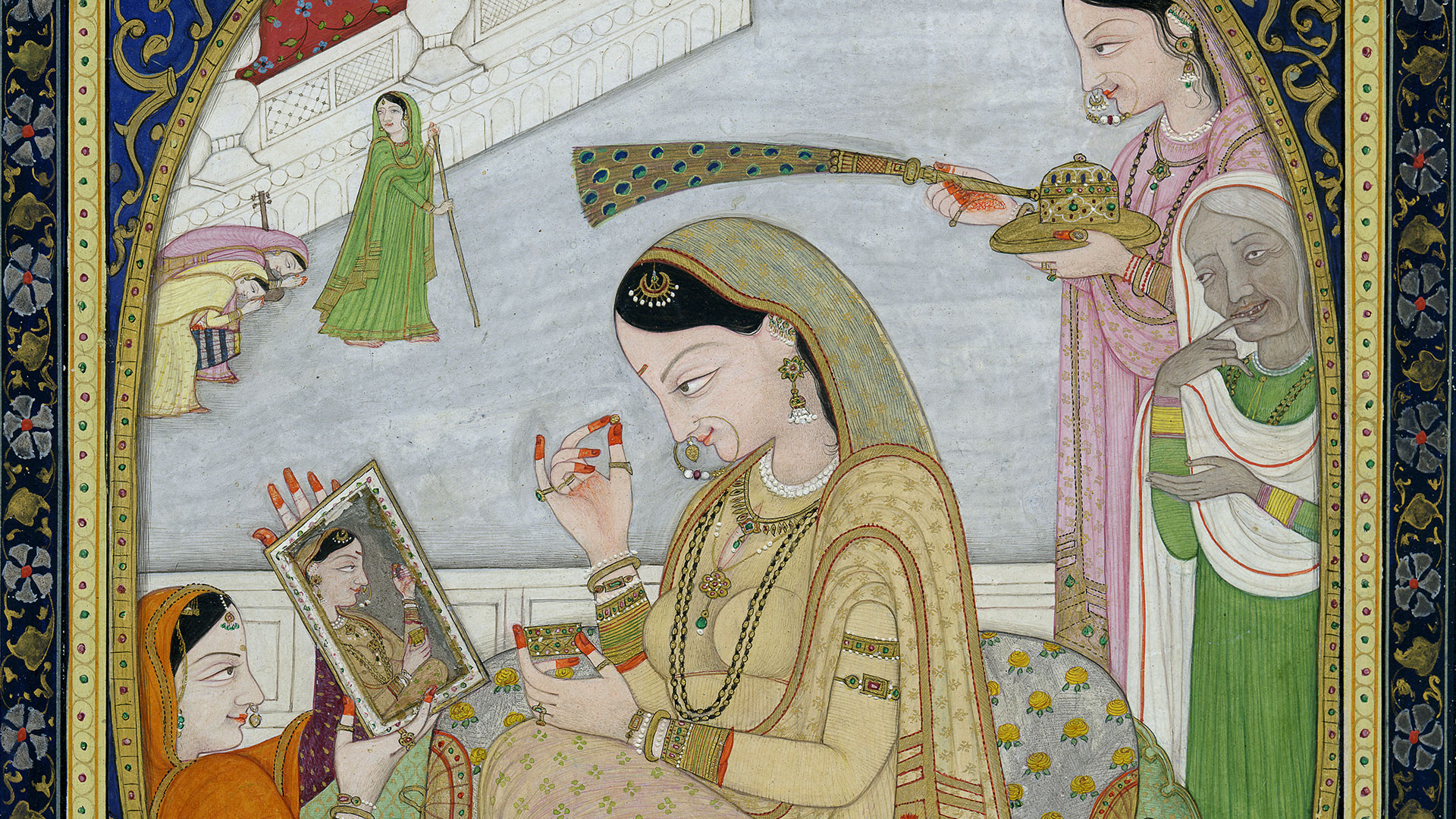 The Asian art gallery in the Israel Museum display works of art that span almost 5,000 years of artistic creation. Each of them offers a glimpse of the rich cultures of China, Japan, and India and the Himalayan region. These are very different cultures, each influenced by its own distinct history, social structure, and physical surroundings. Yet they are also connected, and their art reflects the vibrant exchange of knowledge and ideas in this part of the world, with its shared borders and age-old trade routes.

Japan is a chain of thousands of islands, located east of mainland Asia. The sea surrounding it protected it from invaders from the continent, but also limited its ties with the rest of the world and causing its isolation. Prolonged seclusion deeply influenced the culture of this unique nation, which is characterized by the preservation of the ancient values ​​and institutions, and reception of external influences without renouncing its original culture.  Japanese creativity, displayed in the gallery through a selection of artworks and everyday objects, shows a strong sensitivity to nature, high technical prowess, pure aesthetics, and sophisticated simplicity.

Japan's exposure to China and to the West at certain chapters in its history caused great change. In the 6th century AD, Buddhism, originating from China and Korea, reached Japan, co-occurring with the indigenous ancient, nature cult – Shinto. Buddhism triggered a great burst of artistic creativity: painting, calligraphy, the building of many temples, and decorating them with statues.

A Pagoda inscribed with Buddhist text (kompon dhrani) displayed in the gallery is one of a million pagodas commissioned by the Empress Shutoko, probably to atone for the bloodshed during the suppression of the rebellion that broke out in her kingdom. Pagoda texts were not meant to be read; the act of copying them was an accepted way of gaining religious merit.

The Samurai warriors, led by their Shogun, and the feudal lords ruled Japan from the 12th to the 16th century. War raged at home and beyond. A Samurai suit of armor displayed in the gallery was prepared according to the model developed over the centuries in order to protect the warrior wearing it. The suit's helmet, with its 62 ribs, was made by Myochin Nobuie, a renowned Japanese metal artist, bears his signature and the year of production, 1525.

The 17th century was the beginning of a peaceful era in Japan, marked by stability and seclusion. This period saw the nurturing of traditional forms of Japanese art; painting and printmaking, tea ceremony, garden cultivation, and performing arts.

Japanese No theatre is a near-abstract, stylized musical performance, focusing on the inner turmoil of a person who finds himself in a dramatic situation. A No theater mask in the form of a young woman (ko omote) from the 18th century, worn by a male actor, reflects the classic beauty standards of the imperial court Heian period (11th century), shaved eyebrows, parted hair and blackened teeth.

China’s magnificent culture has existed since the dawn of history until today, evolving in spite of numerous wars, conquests and upheavals. The works displayed in the gallery - including paintings, sculptures, bronze objects and ceramics - shed light on the customs and beliefs, styles and arts that form thousands of years.

In 221 BCE a Chinese ruler declared himself emperor, uniting for the first time the separate states under his authority. Subsequent emperors ruled, supported by an extensive administrative system of scholarly officials. The homes of these officials, as well as in the homes of other wealthy families in China, were organized in the traditional separation of public, and private areas for men and women.

Second to the guest rooms, the study was the most important room in the house. There the head of the household would turn to his elevated arts - calligraphy, reading, playing, or listening to music. It was there too that he would receive his friends to discuss paintings and antiques. A Chinese gentleman’s room was set up in the gallery, displaying 16th to 17th century furniture, allowing a glimpse of the world of a scholar of that period.

Chinese scientists and scholars invented paper, gunpowder, and the compass; changing the course of history, as well as producing silk, tea and porcelain ware. On display in the gallery are examples of the legacy of the rich material culture created by artists and craftsmen.  See, for example, the emperor Daogoang period (1850-1822) bowl, decorated with dragons, and the chrysanthemum-like dish from the 18th century. Both vessels are fine examples of Chinese superior advancement in ceramic production, 7000 year old in China.

Different philosophical systems existed side by side for thousands of years in China, among them Confucianism, Daoism and Buddhism. Traditional ancestor worship, and the belief in the afterlife was also maintained since ancient times, forming the custom of burying the dead  in elaborate ceremonies and sending them on their way, fully equipped with the objects they will need in the world to come. Ancient emperors’ tombs were essentially underground castles, and contained bronze tools, ceramics and pottery that depicted everyday life of agricultural society, complete with farmers and their animals. A fine example is the statue of a Middle Eastern merchant riding a two-humped camel, inspired by the camel caravans laden with goods traveling along the 8,000-mile Silk Road linking China and West Asia to Rome.

Despite India’s physical borders - the Indian Ocean to the south, and the Himalayas to the north - various peoples migrated across these borders and left their imprint on its already diverse social landscape. Today, more than a billion people live there, speaking 14 languages ​​and some 200 dialects.

Religion occupies a central place in the lives of Indians; 80 percent of them are Hindu, and the traditional ancient art is, for the most part, religious in nature. Hindu and Buddhist sculptures were made according to fixed rules observed for centuries, until present day. Visits and pilgrimages to shrines, sometimes thousands of miles away, are common, and are of major significance in the lives of Indians; it is there that ‘Darshan’ (Sanskrit for observation) occurs - the encounter with God.

Works displayed in the gallery, spanning from the 3rd century BCE to the 19th century CE, shed light on some of the fascinating beliefs and philosophies of India. One of the most prominent sculptures, a fourth century BCE red sandstone Shiva, describes this major Hindu divinity as a phallic pole - "Lingam". The “Lingm”s are the most important and most sacred of all the objects in Shiva’s temples. Believers worship them because they symbolize the productive power of the universe, which is one of the most important attributes of Shiva. Next to the statue of Shiva is an enthroned Buddha made of slate, which was carved for a Buddhist temple between the 2nd and 3rd century CE.

Buddhism was founded in the 5th century BCE by Siddharta Gautama, a prince from north India also known as "Buddha" (Sanskrit for “enlightened" or "awakened"), a name that he received as he placed man and his suffering in the center, as well as the ways to heal him and relieve his pain. Buddhism spread quickly and became the dominant religion throughout most of Asia, although centuries later it lost some of its hold in India. Sculpted images of Buddha, played an important role in the spread of the Buddhist faith across Asia. Today, Buddhist sculptural tradition is also appreciated by art collectors in the West as objects of serene beauty.

Next to the sculptures, the gallery also displays paintings, most of which were made in northern India in the 17th and 18th centuries, and were incorporated into religious books describing ancient Hindu mythological epics.