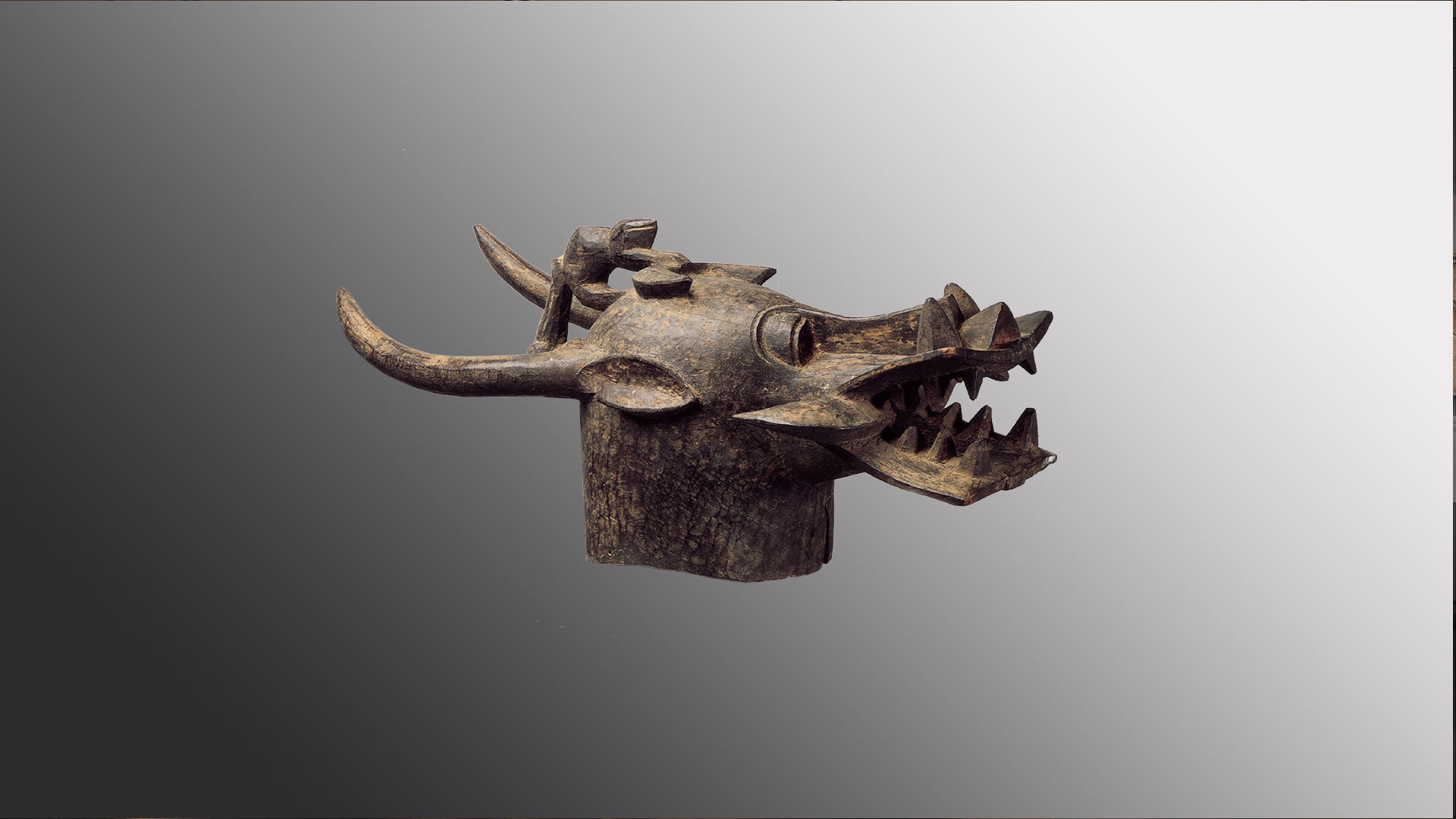 There are 50 countries and 1,000 languages in Africa, the birthplace of the human species and the second-largest continent on earth. The art in this gallery reflects the traditional cultures found south of the Sahara Desert, with examples from as early as the 6th century CE. However, many of the objects date from much later, because African art is frequently made of perishable organic materials like wood, cloth, and plant fibers.

The art in these cultures served religious purposes. Animist religion played a central role, with belief in the presence of spirits who must be appeased through ritual dominating all aspects of society. Powerful forces were thought to be present not only in nature but also in manmade objects. Sculpture functioned as a material manifestation of religion and as a tangible tool for communicating with deities, spirits, and ancestors.

The western coastal region was and remains one of the most densely populated areas in Africa.

Wood was used in non-royal art, including the secret societies’ masks and ancestor figures. These played an important role in shrine decoration, coming-of-age ceremonies, the control of supernatural forces, and the maintenance of social order.

An example for this can be seen in the ancient mother figurine of the Baule people from Ivory Coast on display in the gallery. The woman was, it seems, a pillar of the society. She is portrayed as the ideal woman: her elaborate hairdo indicates grooming, high forehead denotes wisdom and her scarred body tells of her ability to withstand pain.

This mask was used exclusively by members of the Kono secret male society – one of the Bamana’s central power associations. Kono masks were sculpted in the shape of an elephant, a powerful symbol for the Bamana people, the long snout representing the elephant’s trunk. The dark shade of the mask’s encrusted surface – a lasting reminder of the rituals performed during the life of the object – symbolized maturity, knowledge, authority, and power.

The Akan people in the region from Liberia through to Nigeria were the southernmost participants in the trans-Saharan trade network, with the Ghanaians dominating gold mining and gold trade from the 15th to the 19th century. The gold weight, a copper, bronze, or brass counterbalance, attest to this activity. The subject-matter of Ashanti weights is frequently symbolic- bound up not only with their social life, but also with their rich fabric of folk-tales, in that many weights illustrate tales and proverbs, many of them profound and humorous.

Peoples from a variety of ethnic groups live in Eastern and Southern Africa. Many are nomadic herders whose visual arts must be transported easily and therefore take the form of jewelry, body ornamentation, and implements for daily use.

In Sudan, Ethiopia, Kenya, and Madagascar, which also have sedentary populations, large carved wooden memorial sculptures are common. For the Mahafaly peoples of Madagascar funerary sculpture is understood not as a direct or literal portrait of the deceased but as a locus of connection with the ancestral realm. The funerary sculpture creates a linkage as well as serves as an intermediary between the worlds of the living and dead.

An elaborate masking tradition and figurative carved sculptures that served as royal regalia developed among the Nyamwezi and Tanzania and the Makonde of Mozambique. A fine example of this is the impressive throne used by the chief of the Nyamwezi, who would be elevated on the seat in ceremonies while the rest of the tribe members would be seated on the ground.

In the Kalahari Desert, Khoisan Bushmen left behind a vast corpus of rock paintings, which have survived for almost 30,000 years in this parched climate. One of South Africa’s greatest cultural treasures, rock paintings were used in healing ceremonies and also to pray for game animals or to bring rain.

The vast area of Central Africa ranges from tropical jungle to savannah grasslands. This region is home to the Fang, Kota, Kuba, Luba, Mangbetu, Kongo and Chokwe peoples, to name but a few.

For all the different ethnic groups, belief in the power of ancestor spirits played a central role. It gave rise to sculptures that served as intermediaries between the material and the spirit world.  Objects known as “power figures” are the prevalent type among them. Their essence lies in the power with which they have been ritually infused. The power figure from Congo, on display in the gallery, has been filled with nails  meant to awaken the magical powers and harness the ancestors’ spirits.

It was customary among the Mahongwe to preserve and cherish the relics of deceased ancestors. Relics were bundled together in bark containers or in baskets. A wooden figurine covered with brass and copper was attached to the container. Its polished metal surface was thought to deflect evil. These reliquaries were believed to benefit those who possessed them. They were kept hidden in a specially designed structure and displayed during initiation ceremonies.

Elongated masks of this type were worn by members of the powerful religious and judiciary secret society known as Ngil. This society was widespread among the northern Fang and other groups to the southeast of them. Ngil members acted as policemen and judges, exposing sorcerers and sentencing those who disobeyed the law. (Death was the usual penalty for sorcery.) Ngil masters also served as peacekeepers, settling conflicts between clans and rival villages.

The Pacific Ocean, a third of the earth’s surface, has long been an arena of exploration, settlement and interaction for the peoples who lived in its vicinity and, much later, for the nations of Europe. Roughly 40,000 to 60,000 years ago, migrations from Southeast Asia began to populate the South Pacific, from large landmasses like Australia to tiny islands. Thousands of small, relatively isolated societies were created, many of them carrying on the influence of early Southeast Asian tribal cultures.

The gallery display reflects the flourishing of visual art and material culture in Melanesia, Australia, Micronesia and Polynesia. For the native people of these regions, art was an integral part of daily life, inseparable from religious belief and ritual, which in turn were based on the conviction that the natural and the supernatural inhabit the same realm.

The themes of death and the afterlife, fertility, initiation, and social status, appear in all forms of art. Craftsmen worked in every medium that was available to them, from wood and stone to leaves and feathers. With its technical refinement and great stylistic diversity, Oceanic art is one of the richest in the world.

The lives of Aboriginals, the descendents of the settlers who arrived from Southeast Asia, on the continent in primitive watercrafts some 40-60,000 years ago, is rooted in and determined by "the dreaming", a powerful concept which  refers to a mythical sacred past - a time, the Aboriginals believe, when the Spirit Beings set the pattern for the entire world and its inhabitants. Art,  for the Aboriginals, can bridge between the past and the present so that they coexist side by side like some parallel reality.

Through their art, which is filled with geometric patterns or naturalistic motifs charged with a complex symbolic context, Aboriginal people found a way to transmit their history and traditions, thus preserving their culture. The Tiwi Basket on display is a good example for such an object, with its ancient tribal symbols, loaded with meaning, meant to carry ceremonial presents at traditional funerary rituals. The Tiwi Totem – image of mythical ancestor, carrying a typical aboriginal image - was made by artist Kitty Kantilla in the 20th century, and illustrates the continuity of traditional art in modern day creativity.

A double headed sculpture, represents a bi-sexual ancestor who had been deified. The double sexuality reflects the duality of the super-natural. This figurine was worn around the neck of the relatives of the deceased in funerary ceremonies or the dancers, symbolizing the dualism of life and death.

Another interesting ceremonial object in the gallery is a Poupou borad from the 19th century. This is a large panel, carefully carved to represent an ancestor, standing in the prayer house (Emrae).

The materials used and beauty of Polynesian objects stand for the social status of their owner. A Whale ivory staff is a good example of these luxury items. The whale had special meaning for Polynesians. It teeth are linked to divinities that rule the sea, and mark alliances – from marriage to military treaty between people. 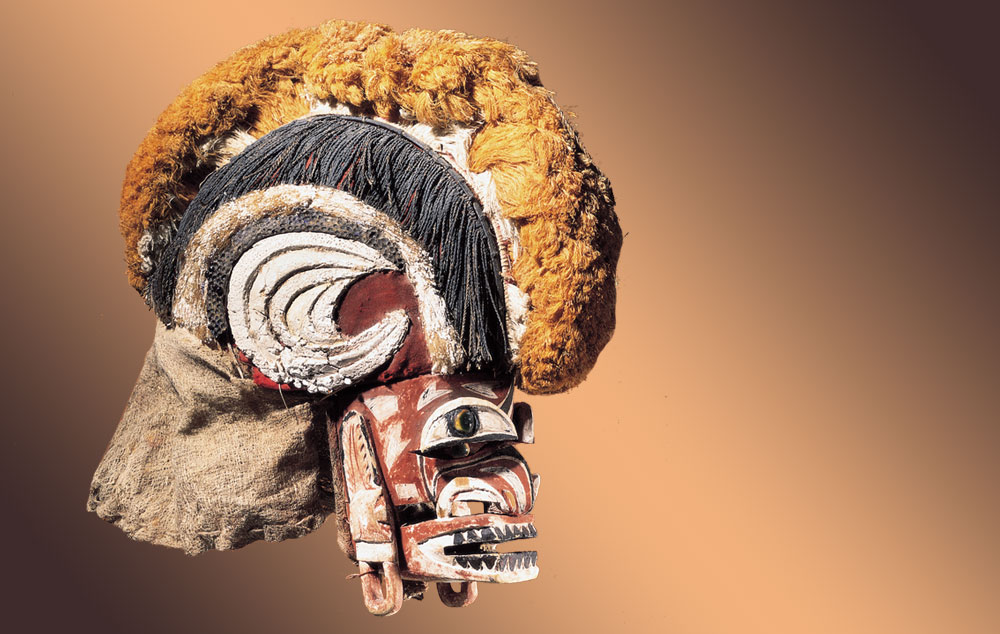 When Europeans arrived in Melanesia they were met by a completely new visual experience comprised of fantastic figures and exceptionally ornate decorations.   The dominance of three dimensional human figures in the arts of this region reflects the essential role of ancestral spirits, whose abode is the sculpture and whose benevolence can be induced by ritual or magic.

Social life in Melanesia is dominated by secret societies whose meeting place is the men's cult and clan house. The members of each society were carefully selected, and prepared physically and spiritually for their role as mediators between natural forces and spirits of the world and their community. Each cultural group had its own repertoire of styles in life and art.  In the large islands - notably Papua New Guinea, the second largest island in the world – cultic life is the mainspring of the arts.  The men's cult and clan house was central to the production of a variety of carved figures, masks, and sacred musical instruments, which were made with great ingenuity. A big initiation ritual mask from Papua New Guinea, shaped like an ancestor’s spirit, is made of flattened tree bark.

Mask making tradition was wide spread and was expressed in tribal celebration, such as the Malanggan funerary mask shown here. In these ritual, each one of the men wears his mask, each one representing the ideal of male beauty, through the oversized nose, elaborate hair style, and aggressive demeanor.

Micronesia, a name denoting small islands, is comprised of clusters of 2,500 islands, many of which are too tiny to be inhabited.  The way of life of the societies on these islands is influenced by the sea that surrounds them.  Skilled navigation, voyaging, and fishing have become symbols of Micronesian identity, and themes in Micronesian art and culture.

The art objects on display, executed with precision, are related to ocean navigation, or serve as canoe prow ornaments and as charms. The only masks from Micronesia are from the island Mortlock Atoll and they represent benevolent spirits who serve as protection from natural disasters coming from the sea.  The Mortlock Atoll mask in the gallery is meant for hanging in the room corners as protection from storms, floods and other disasters.

In the eastern Micronesian islands fine textiles are woven from banana and hibiscus fiber on back-strap looms. Micronesian textiles, especially the loom-woven works of the Caroline Islands, are noted for their geometric renderings of humans, stars, and fish.  The Micronesians have a strong respect for natural materials, which are scarce.