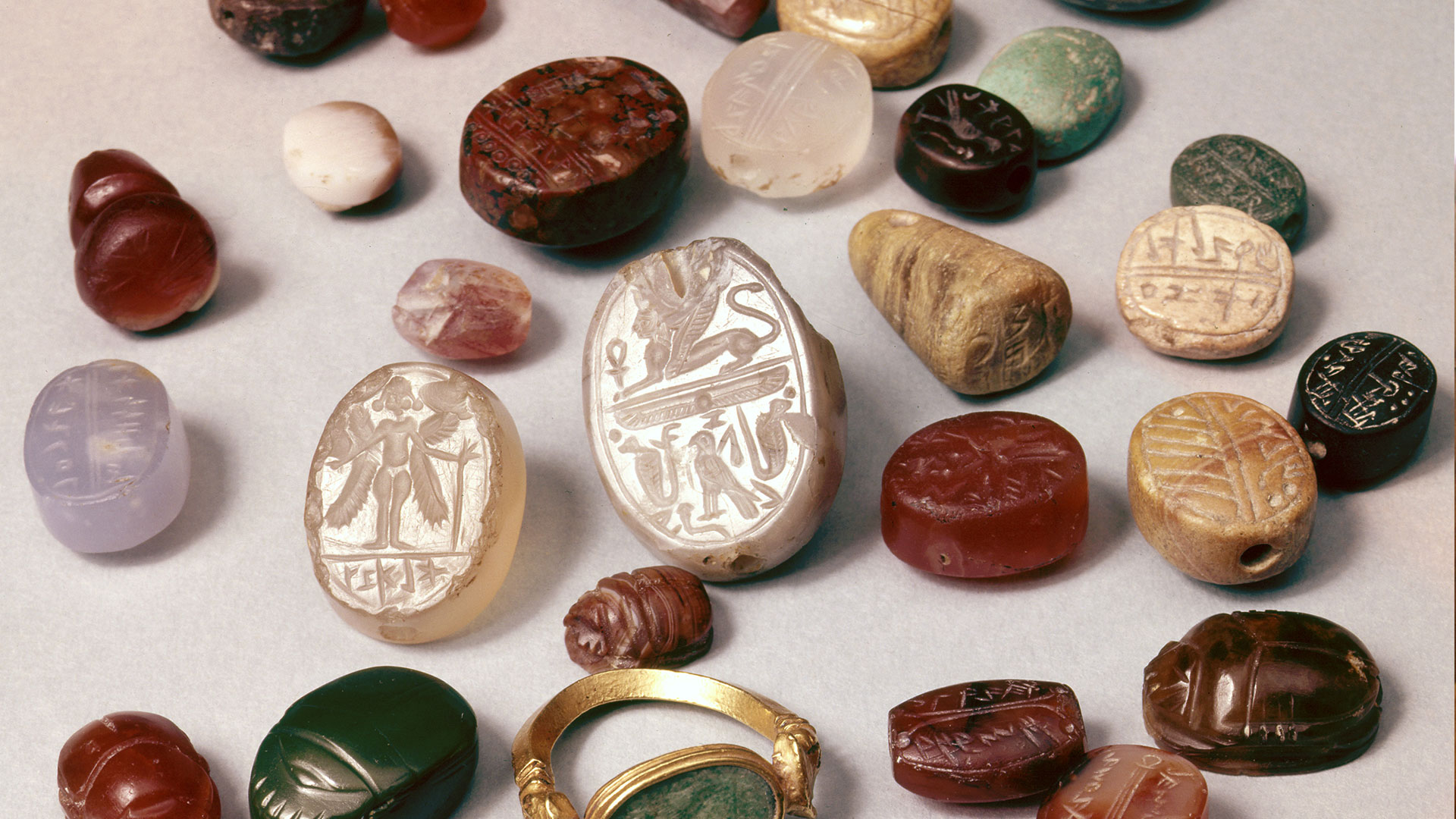 The invention of the alphabet at the beginning of the second millennium BCE was a revolution that lead to the spread of literacy. Unlike Mesopotamian cuneiform, or Egyptian hieroglyphs, which required the knowledge of hundreds of signs, the alphabet was comprised of less than 30 symbols, thus greatly simplifying reading and writing. The alphabetic revolution is illustrated in the gallery through numerous artifacts, such as the dedication to the goddess Elat, inscribed on a jug, discovered at the Lachish excavations in a Canaanite temple dated to the 13th century BCE.

The order of the letters as we know today was established over 3,000 year ago, as evident in the inscribed potsherd discovered in Izbet Sartah near Rosh ha-Ayin. The unique characteristics of ancient Hebrew script crystallized during the 10th and 9th centuries BCE, but only ca. 800 BCE did it spread throughout Israel and Judah.

Hebrew inscriptions were found on royal stelae, on sacred objects, documents, seals, and on various vessels; they were engraved on stone, and other hard materials, or written on papyrus, pottery (ostraca were "notes" on potsherds) or on bone; some were written by professional scribes, whereas others were written by less experienced hands. Particularly noteworthy are the Hebrew seals made out of semiprecious stones, ivory, bone and metal. These seals, like many other discovered, were used primarily to stamp documents and containers, as a mark of ownership.

A letter from a reaper addressed to "the governor", pleading to have his cloak returned to him, offers a rare glimpse into the biblical justice system. Letters found in Lachish’s city gate offer a firsthand report of the city’s guards' emotions as they watch the Judahite strongholds around them fall to the Babylonian army one by one.

The Hebrew inscriptions on display are a fascinating testimony to all facets of Judahite and Israelite societies in biblical times - from the royal court, through priestly circles, industry and commerce, and daily life. The Museum collection is one of the world's most important collections of Biblical Hebrew inscriptions.

The ancient Hebrew script was in use up to the destruction of the first temple. When the exiles returned from Babylon to Judah, they already spoke and wrote Aramaic, a script, which is the precursor of today's Hebrew script.

Ancient Hebrew script reappeared from time to time, in a more limited way; often in religious contexts (the Dead Sea Scrolls) or  symbolically, in times of national crisis (the coins minted during the Bar Kochba revolt, for example).

From the time they were introduced some 2,600 years ago, coins have been an integral part of daily life. Prior to this, people weighed out metal on scales in order to pay for goods; with the introduction of coins, however, standardized pieces of metal of fixed denominations and weights were used instead. This innovation first appeared in western Asia Minor (Turkey), in the ancient kingdom of Lydia, at the end of the 7th century BCE, and was rapidly adopted throughout the Greek world. Inhabitants of our region began using coins in the mid-5th century BCE.

Though small in size, coins are nevertheless important historical documents, providing direct, tangible evidence for events and individuals otherwise known only from ancient literary sources or not known at all. Deciphering the language of coins enables us to retrace the development of cities and states and uncover the aims and aspirations of rulers. The designs and inscriptions provide a wealth of information about the societies that minted the coins and the people who used them.

A selection of coins from the late seventh century BCE to the present are displayed in the gallery. They tell the story of the society and civilization that minted them; their religion and culture. The images and inscriptions they bear reveal details and chronicles on the development of cities and states, or important events; shedding light on the policies, and aspirations of their rulers.

The coins in the gallery, among them some of the oldest ever minted in Ancient Israel, reveal a world of rich imagery, expressing local beliefs. Note the unique coin, minted in Philistia, and dated 5th century BCE. This coin depicts the forepart of a lion on the left and a lion’s hind part on the right, creating the illusion of a complete lion with its head in profile. When the coin is turned 90° counterclockwise, the image appears to be that of a bearded, helmeted male.

Some coins were accepted throughout the world, even far away from the place they were minted, and thus became international currency, the “dollar” of ancient times. For example, an Athenian silver tetradrachm (420–390 BCE) was discovered in ‘Atlit, on the northern shore of Israel. On one side the Greek goddess Athena is described, and on the other her symbol; an owl.

Other coins served as propaganda, disseminating political, religious and military messages, such as a bronze Sestertius (80 CE) minted by the Romans after their victory over Judah, and inscribed “Captured Judaea".

Since the establishment of the State of Israel many coins were modeled after ancient Jewish coins, connecting Israel’s past with its present. The two shekels coin on displayed in the gallery stands next to the Hasmonean coin minted by king John Hyrcanus (129–104 BCE), on which it is based.

Glass through the Ages

Glass, a man-made material first produced in the ancient Near East around 2000 BCE by heating sand and salt, remains a symbol of magic and mystery .

The first glass vessels, small and costly perfume and ointment containers, were produced in Mesopotamia and Egypt around 1500 BCE. The pomegranate-shaped bottle shown in the gallery is a good example of one of the earliest glassmaking techniques; it was made from melted raw glass wound around a core of organic material. The same technique was used for the production of glass vessels in the first millennium BCE in the Mediterranean region, while others were made in molds, such as the magnificent translucent blue bowl on display in the gallery.

The early production techniques remained virtually unchanged for 1,500 years, until the revolutionary discovery of the secrets of glass blowing on the eastern shores of the Mediterranean in the mid-1st century BCE. This breakthrough is evident in the jug bearing the Greek inscription “Ennion made it,” referring to the great Sidonian master of the 1st-century CE. This extraordinary piece, which was found in the excavations of Jerusalem’s Jewish Quarter, only barely survived the destruction of the city in 70 CE.

Ancient glass vessels were often decorated with religious symbols. A moving example of this can be seen in a gold-glass base, dating from the 4th century CE, which was used to mark a Jewish grave in the Roman catacombs. Each base is made of two layers of clear glass encasing gold leaf and bears Jewish symbols, such as the Torah Ark and the menorah, the seven-branched candelabra.

Owing to its colorfulness and versatility, glass became one of the primary materials used for such small items, such as jewelry and inlays. The falcon-headed mold-made inlay of the 6th–4th century BCE representing the Egyptian god Horus is a fine example.

The core of our holdings was donated by Eliahu Dobkin, a passionate collector of ancient glass from the Land of Israel and neighboring lands. Over the years, the collection has been enriched by additional gifts and loans, including breathtaking pieces from the collection of Renée and Robert Belfer, New York. The permanent exhibition is completed with important glass finds from local excavations.