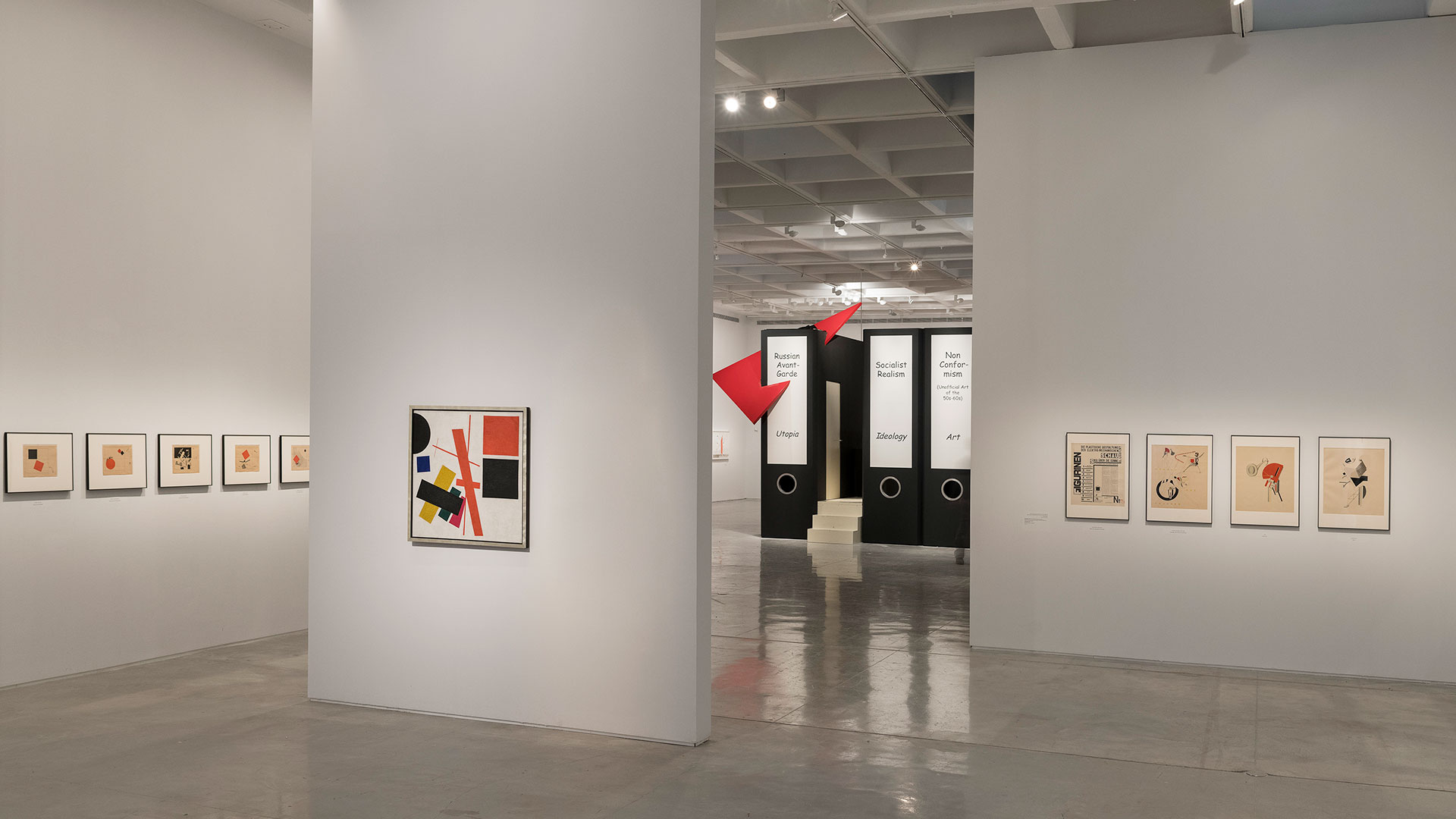 New Books for a New World

Throughout the early decades of the 20th century, artists and writers of the Russian avant-garde collaborated on books. They overturned the traditional relationship between text and image, creating pages with expressively handwritten, seemingly random texts or unconventional combinations of words and typefaces, and experimenting with techniques like collage.

In the years 1912–14, the Futurists were the first to bring a radical approach to books. The Futurist writer Aleksei Kruchenykh – nicknamed “the bogeyman of Russian literature” – encouraged artists to be partners in the creative process rather than illustrators. He enlisted key avant-garde artists such as Larionov, Goncharova, Malevich, and Rozanova, together with poets like Khlebnikov, Mayakovsky, and David Burliuk.

Avant-garde creativity drew on many different sources, including the folk art of the lubok print. In Explodity, the cacophony of Kruchenykh’s abrupt alliterative verse fused with the book’s unharmonious appearance. Larionov designed Worldbackwards, uniting Neoprimitivist style with his early abstract Rayism. Like the Neoprimitivists who drew on Russia’s visual heritage, El Lissitzky was inspired by his cultural roots to propose a Jewish artistic amalgam for the modern age.

During the 1920s, Lissitzky moved from Suprematism toward Constructivism and also began to incorporate such new technologies as photomontage into his work. International publications placed the Russian avant-garde firmly on the European map and showcased the emerging Soviet culture. By the late 1920s, however, not only had the production methods and aesthetic ideologies of bookworks changed, political developments were also limiting artistic freedom and redirecting the social function of art.

During the era of nonconformist art, the interplay of image and text once again played a central role. Thus new radical approaches to the Russian book, most notably in Ilya Kabokov’s seminal albums of the 1970s, emerged on the unofficial art scene. 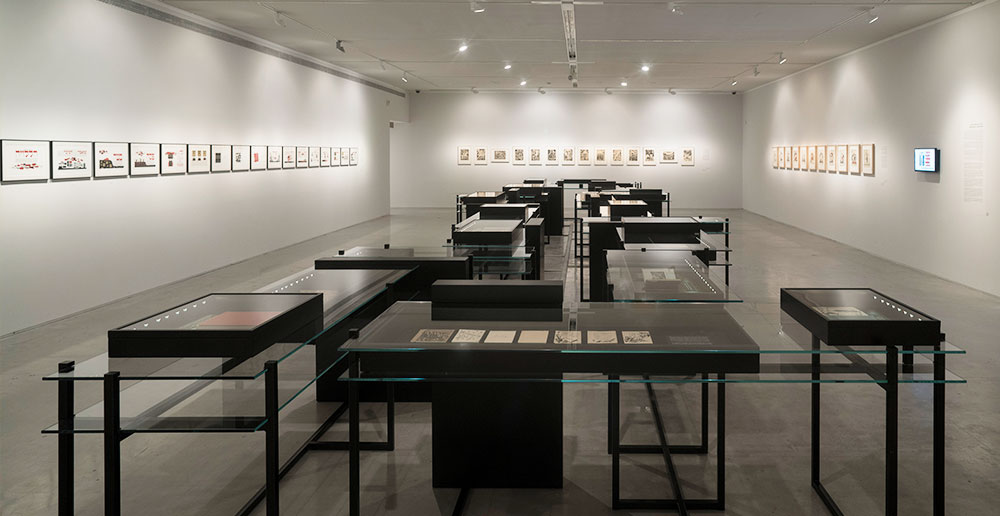 The disjointed language of the experimental zaum verses in Explodity is echoed in the book’s appearance, including its diverse paper types and page sizes. Designed by Olga Rozanova, the second edition of the book comprises the leaves seen here – by Rozanova herself (1, 5, 9–11, 13–14), Kruchenykh (3–4), Malevich (7), and Nikolai Kulbin (2, 6, 8, 12). Some feature words printed with rubber stamps, some are handwritten in lithographic pencil, and some are lithographs – and all are equally powerful. As in a dream, recognizable details morph into abstract shapes in a constant whirl of splitting, shifting, and indeed “exploding.”

A Game in Hell

In this second, revised edition of A Game in Hell – the first lithographed Futurist book – Kazimir Malevich was responsible for three drawings and the cover, but Olga Rozanova set the tone with more than twenty visual compositions. In the poem, a sinner who has bet his soul plays cards with a Futurist devil that is seen here presented through the dark lens of irony and a lubok-inspired grotesque style. 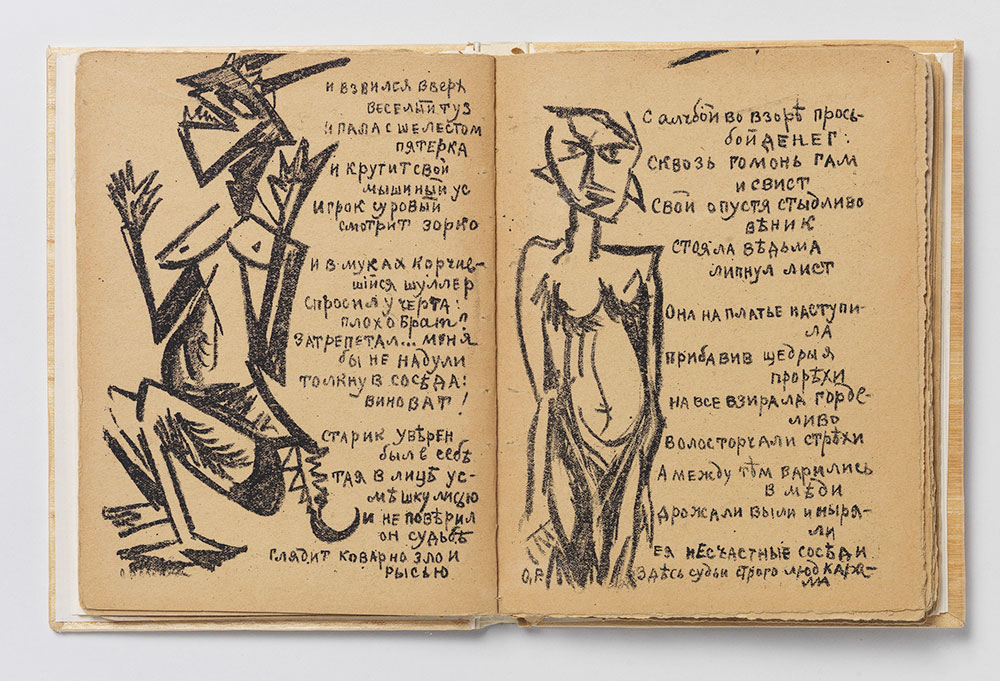 This enigmatic story by Ilya Ehrenburg tells of an elderly Jewish watchmaker whose son in America writes that he will send him a shifs-karta – which the father, not understanding the word for ticket, awaits as some sort of promise of salvation. In the end, however, the old Jew remains and loses his life amid the turbulent events of Russia’s civil war.

Lissitzky’s complex composition includes a fragment of a roundtrip boat ticket from Hamburg to New York, superimposed on two intersecting triangles forming a skewed Star of David; a section from the Mishnah about the measurements of the Temple in Jerusalem; and the imprint of a hand with the Hebrew letters peh and nun (an acronym for the phrase meaning “here lies,” engraved on Jewish tombstones). This eloquent work can be interpreted as suggesting the impending demise of the old Jewish world and birth of a new post-revolutionary order.

In March 1920, Nathan Altman was invited to portray the Communist leader Lenin in his offices in the Kremlin. Because Lenin did not have time to sit for a portrait, Altman captured his face and movements in a number of quick sketches that resulted in the ten photogravures published in this book. The book’s cover design, with its Suprematist and Constructivist elements, offers a stark contrast to the realistic style of the prints and the drawings on which they were based. Two of the original drawings may also be viewed here. 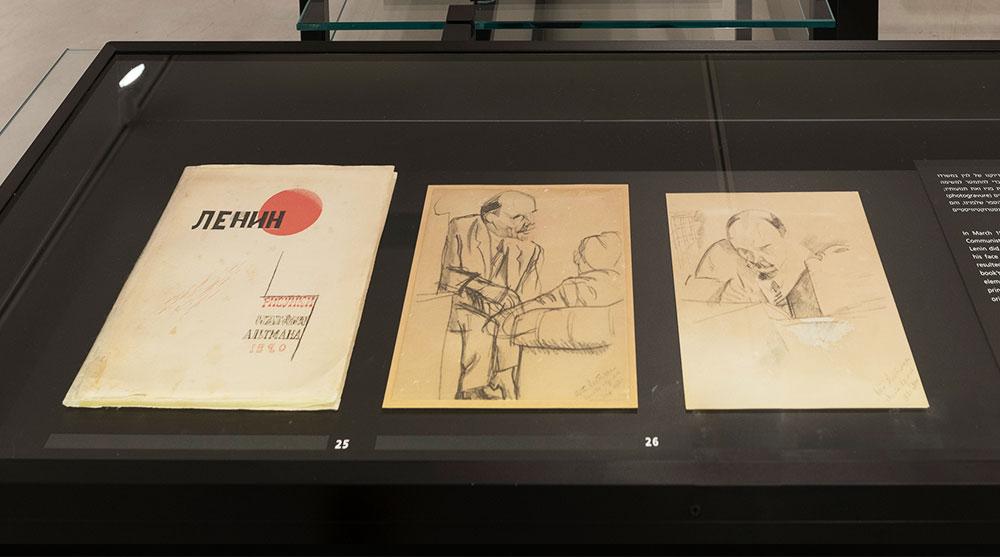 5 x 5=25 was the title of a two-part abstract art exhibition held in 1921 at the club VSP (All-Russian Union of Poets) in Moscow. Five Constructivist artists – Alexandra Exter, Lyubov Popova, Aleksandr Rodchenko, Varvara Stepanova, and Aleksandr Vesnin – created five works each for the first part of the show. The exhibition’s catalogue was in fact twenty-five original bookworks: each artist produced handmade leaves in varying sizes and with different illustrations, and only the typed text was common to all. Shown here are two of these catalogues. The highly abstract geometric works reflect their creators’ rejection of traditional forms of painting and their proclamation of the “end” of art. Constructivism’s aesthetic and utilitarian principles are exemplified by the clean cover designed by Rodchenko, the outstanding exponent of its new approach. 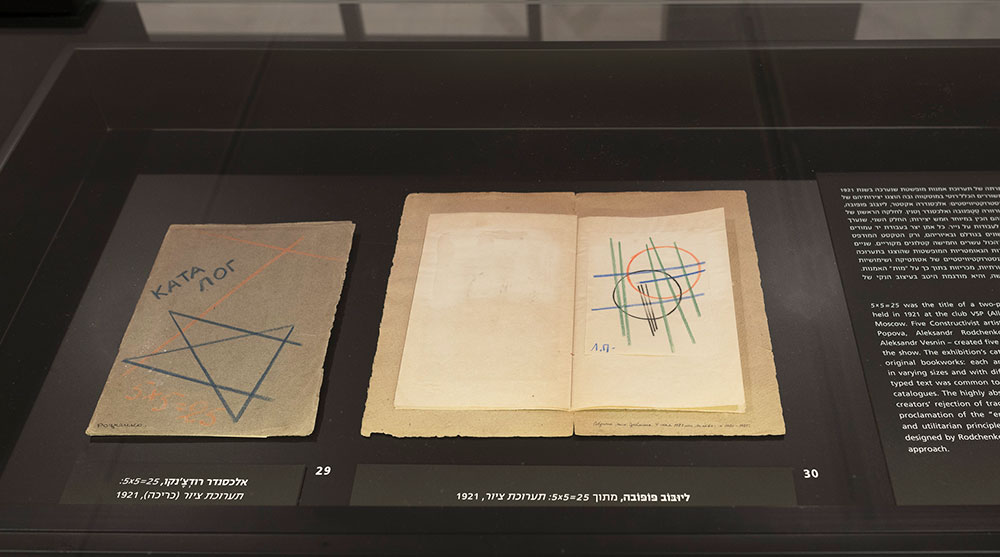 For the Voice contains some of the great Soviet poet Mayakovsky’s best-loved poems – including “Left March,” “Love,” and “The Third International” – presented in Lissitzky’s innovative graphic design. Each poem is accompanied by a dynamic visual composition. The abstract red and black pictograms that distinguish the book’s typography reflect Lissitzky’s avant-garde belief that books should convey a unified approach to form and content, the first conveying the rhythm of the second. Since Mayakovsky’s poetry was intended for recitation, Lissitzky also took functionality into account and provided a thumb index to help find a specific poem. 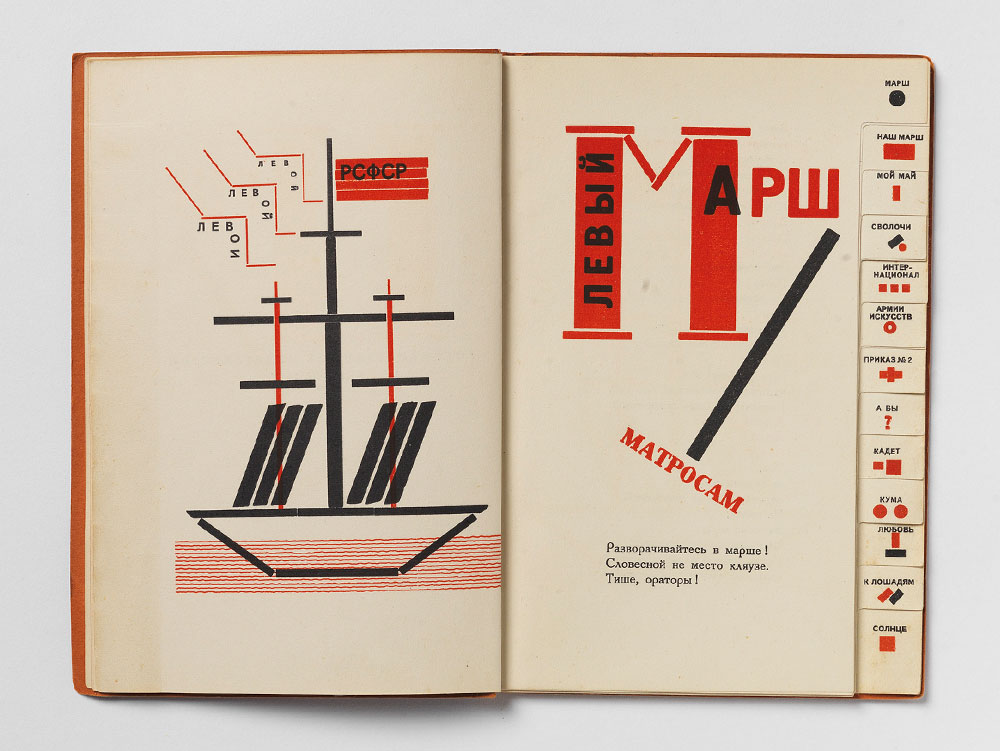 The Left Front of the Arts, an association of avant-garde writers, photographers, critics, and designers, published the LEF journal between 1923 and 1925. Edited by Vladimir Mayakovsky, with Aleksandr Rodchenko designing the covers, LEF focused on Constructivist themes and was the first publication in the Soviet Union to reproduce photomontages.

In 1927 the journal was succeeded by New LEF, under the editorship of Mayakovsky and later of the playwright and photographer Sergei Tretiakov. New LEF highlighted works by Russian avant-garde artists and presented recent developments in photography and film, promoting the idea that the working class should use these new artistic media to document life. New LEF dissolved in 1929. 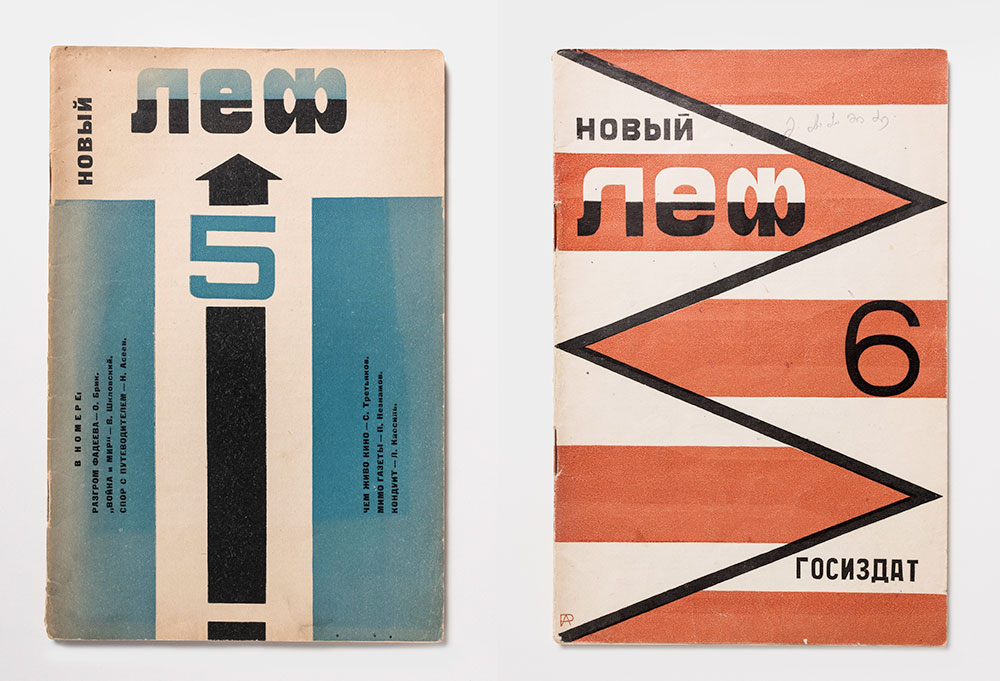 Around 1917–1922, El Lissitzky was engaged with the revival of Yiddish culture, illustrating a number of books for adults and children. His best-known project in the Jewish sphere is his work on the Passover song Had Gadya, which he revisited in drawings and lithographs.

Had Gadya, sung at the end of the Seder ritual meal, tells the story of a little goat that Father buys for two coins. The kid is eaten by a cat, which is then bitten by a dog, which is beaten by a stick, and so on, until God intervenes and kills the Angel of Death. Lissitzky’s imaginative, playful designs are inspired by Jewish folk motifs from tombstones and painted synagogues, but at the same time they reflect the modernist aesthetic of his time. Features like the integration of text and image, new artistic treatment of letters, and traces of geometric abstraction testify to his growing avant-garde tendencies.

In content as well as style, Lissitzky offers a contemporary take on a traditional text, by suggesting a parallel between divine redemption and the Bolshevik Revolution. The Angel of Death wears a crown resembling those of Russian tsars, so that his execution implies the end of the monarchy. The hand of God in the final panel also takes on a revolutionary aspect: it closely resembles the first postal stamps printed in 1918, in which a strong hand appears under the sun, gripping a sword and about to cut the chain of bondage.

El Lissitzky, Had Gadya (The tale of a goat), 1918–19, Eleven drawings, gouache and India ink on paper, Tel Aviv Museum of Art, Gift of Israel Pollak, Tel Aviv, with assistance from British Friends of the Art Museums of Israel

Russia’s involvement in World War I inspired a wave of politically engaged, accessible art. Mystical Images of War by Natalia Goncharova was among the earliest variations on the theme, and one of most expressive and profound. Realized in Goncharova’s Neoprimitivist style, to which the spirit of Russian icons and folk art has been added, the lithographs present a sequence of detailed individual scenes. The artist merges apocalyptic scriptural motifs (The Doomed City and The Pale Horse) and figures from Russian history (Peresvet and Osliablia, two medieval monks famous for taking part in the Battle of Kulikovo) with present-day elements – military uniforms, factory smokestacks, airplanes – to create a universal mythology of war that transcends time and place.

Dramatic contrasts animate the scenes: light and darkness, heaven and earth, destruction and redemption. In Angels and Airplanes, divine beings are struggling against the modern technology of war, but in Vision in the Clouds, contemporary soldiers receive a blessing from the child Jesus in his mother’s arms. The first prints in the series reveal Goncharova’s patriotic hopes for a speedy victory by featuring two images of power from the tsarist Russian coat of arms: St. George slaying the dragon and the double-headed eagle.

At the age of fourteen, Zoya Cherkassky immigrated with her family from Kiev to Israel, where she pursued her art studies. Cherkassky’s Aachen Haggadah was part of a broader project called Collectio Judaica (shown at the Rosenfeld Gallery in Tel Aviv in 2000), which referenced anti-Semitic caricatures and such themes as the blood libel, the myth of the Wandering Jew, and the yellow Star of David.

Synthesizing associations from various periods and cultures in her Passover Haggadah, the artist depicts the Israelites as ultra-Orthodox Jews with beards, sidelocks, and fur hats, as well as wings and claws (invoking the medieval Birds’ Head Haggadah). Her geometric approach and restricted palette were consciously inspired by Malevich and Lissitzky. Red and black squares represent the plagues of blood and darkness; a row of four white squares represents the ineffable Divine Name – though perhaps also (paradoxically in this context) God’s absence; and the Egyptians are represented by pyramid-like triangles. Cherkassky’s Had Gadya is another nod to Lissitzky, whose avant-garde version of the song may be viewed in this gallery.

Created during the artist’s stay in the German city of Aachen, the Haggadah reflects the complexity of her own identity, torn between tradition and modernity, Soviet heritage and Jewish culture.