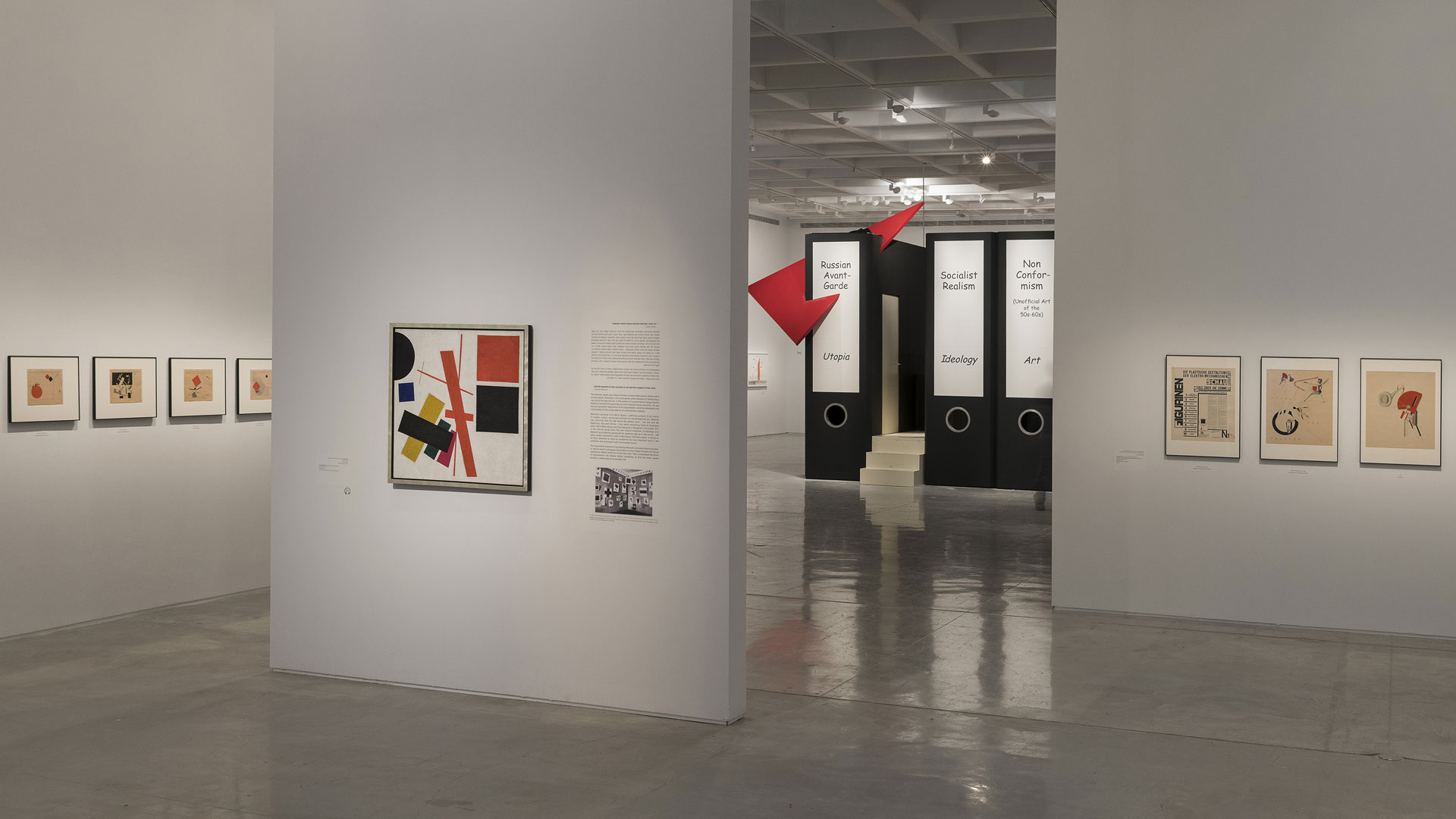 After becoming the Soviet Union’s head of state in 1985, Mikhail Gorbachev launched his program of perestroika (reform). Gorbachev remained faithful to Socialist principles, but government structures, the economy, and society were revitalized. In the atmosphere of liberalization and creative freedom that spread throughout the country, a new world of exhibition opportunities arose, artists from all over the USSR flocked to Moscow, and international careers for Russian artists also flourished.

With the collapse of the Soviet Union in 1991, the distinction between official and unofficial art vanished, boundaries between various types of nonconformist art became much more fluid, and contemporary art gained in stature. This new era is the focus of the final section of the exhibition. Works by a recent generation of artists – Pavel Pepperstein, Vadim Zakharov, Andrei Filippov, David Ter-Oganyan, and Alexandra Galkina – reveal a complex attitude toward the Russian avant-garde. Avant-garde traditions make their presence felt, and its legacy is acknowledged, but not without a certain critical irony. 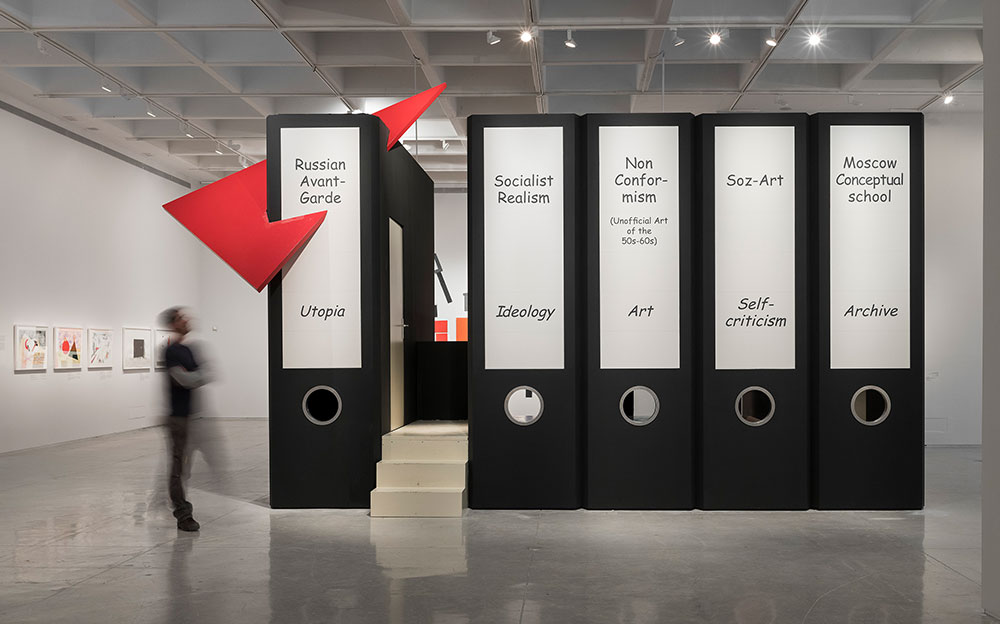 Vadim Zakharov is a Moscow Conceptual artist, art collector, and archivist. He collaborated in exhibitions of unofficial art beginning in 1978, and in the 1980s participated regularly in the APTART shows (clandestine exhibitions that took place in artists’ apartments). He moved to Germany in 1989 and works in Berlin and Moscow.

Zakharov’s History of Russian Art consists of five gigantic archive folders, with a short staircase leading up to an inner passage. The first, labeled “Russian Avant-Garde: Utopia,” is pierced with Lissitzky’s red triangle; the folder’s opening is closed off, but the sound of a man snoring can be heard inside. The other folders – dedicated to Socialist Realism, Nonconformism, Sots Art, and the Moscow Conceptual School – are open and invite the viewer in. In this way, Zakharov indicates his belief that the early avant-garde movement has little relevance and has not really become part of the continuum of Russian art history.He parodies attempts to classify art, while simultaneously maintaining that art cannot escape bureaucratic language and civilization’s need for classification. The “architectural folders” he creates encapsulate any and every culture, invoking the utopian idea of an Eternal Archive. 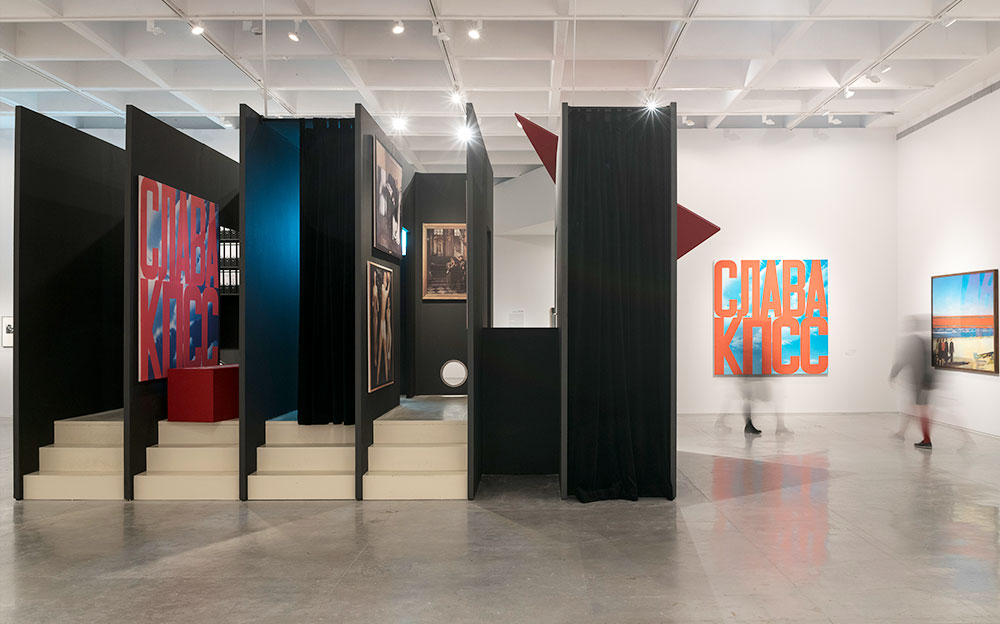 Artist and writer Pavel Pepperstein, a leading member of the Moscow Conceptual School’s second generation, interweaves visual imagery and textual commentary in his work. This synthesis is rooted in his early education: his father, Viktor Pivovarov, was a well-known Moscow Conceptual artist, and his mother was a writer of children’s literature.

Adopting the familiar visual language of early-20th-century revolutionary artists, Pepperstein emphasizes the global importance of the Russian avant-garde. He creates a utopian universe that combines witty, absurd elements with references to avant-garde imagery, Soviet symbols, literature, fairy tales, children’s book illustrations, history, and geopolitics. Thus, for example, in one of his futuristic works, the Russian government ironically chooses a huge black cube called the Malevich Building as its official residence. 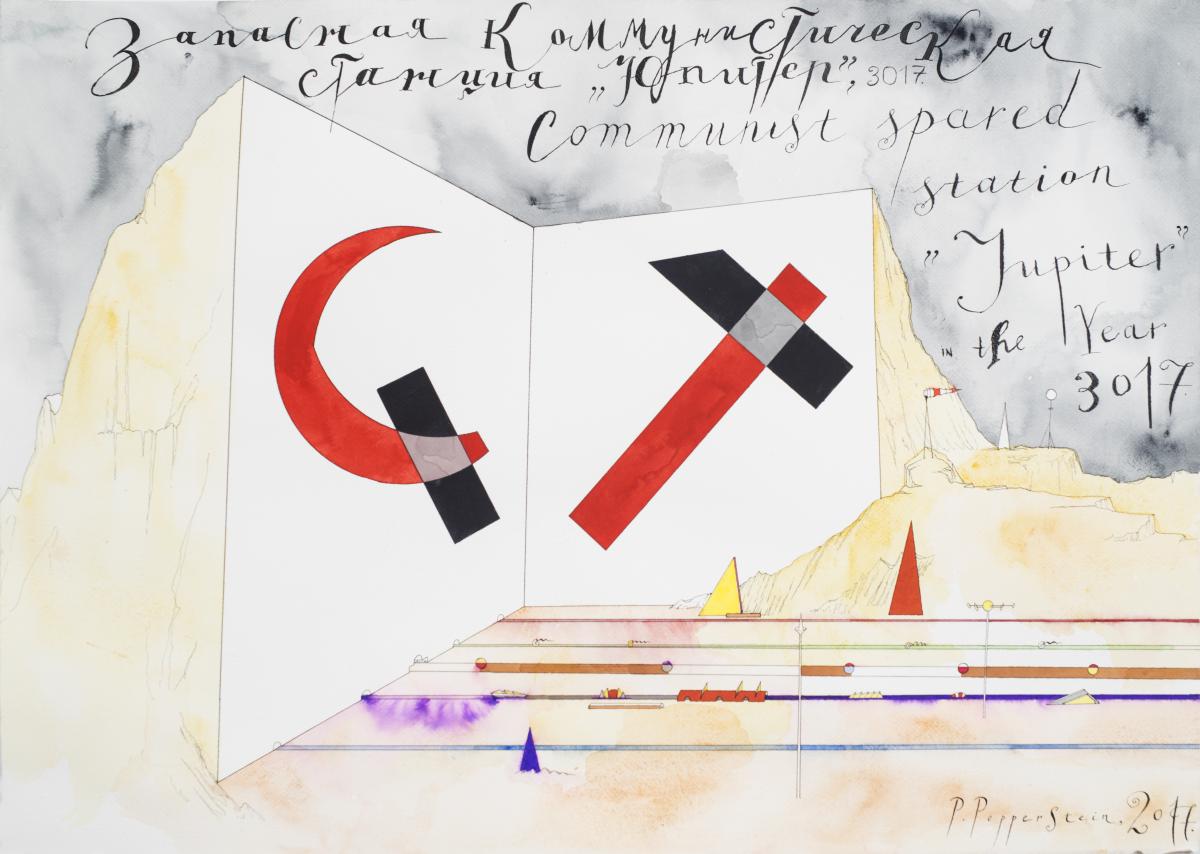 “In 3017 an intergalactic terminal ‘Jupiter’ will be built, the architecture of which will be reminiscent of aesthetics of the Russian avant-garde.”
- Pavel Pepperstein 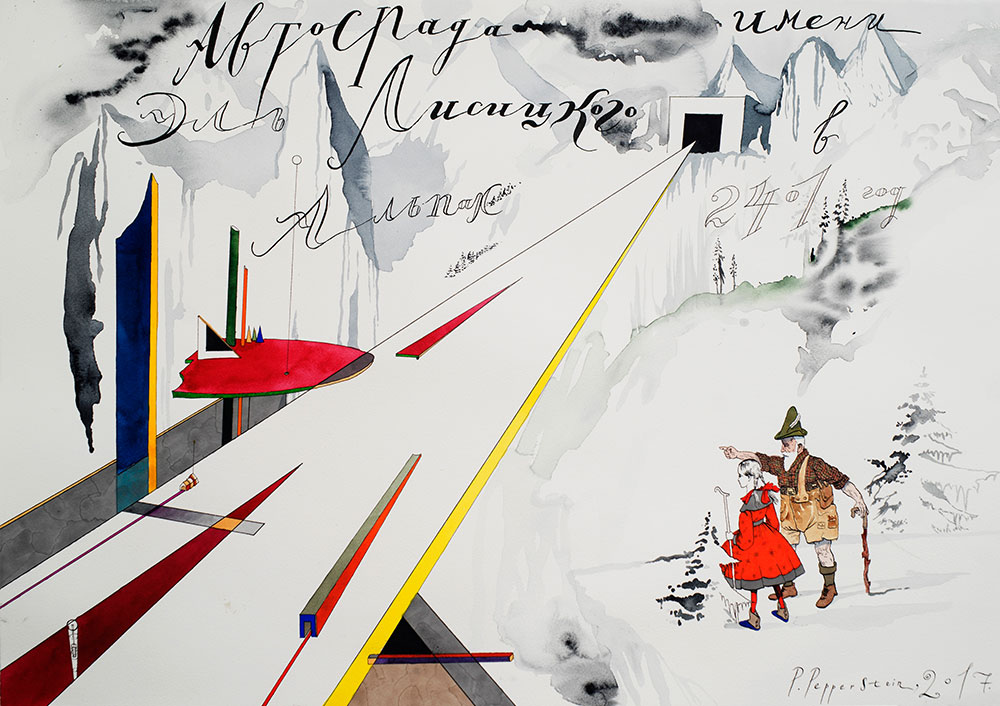 “The Alpine sketch depicts a garrulous old man dressed in the same way as the inhabitants of the high Tyrol or the Swiss alpine cantons (leather shorts and a typical Tyrolean hat with a feather). The old man shows a girl dressed in a mysterious red dress a newly built motorway named after El Lissitsky, its design reminiscent of Russian Suprematism. The old man’s face glows with pride. Despite the fact that he probably holds the patriarchal values of those isolated mountain enclaves, nevertheless, he clearly enjoys the movement of progress invading his native highlands in such vivid and bizarre forms.”
- Pavel Pepperstein 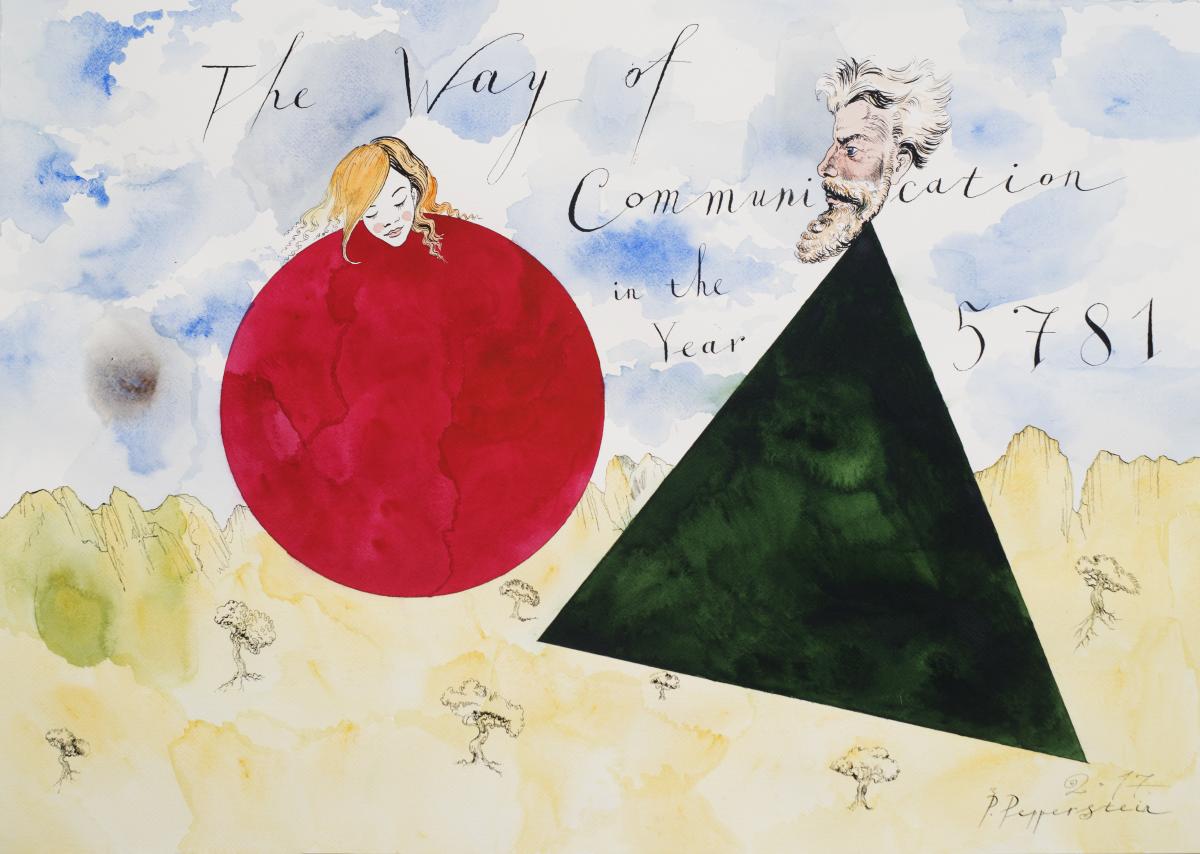 “In 5781, two new types of speech, with their concomitant behaviors, will become fashionable – triangular and circular speech. Triangular speech will be especially noticeable among men over the age of fifty. Circular speech will be very popular among young girls. The union of an elderly gentleman with a young girl will be called a ‘triangle inscribed in a circle.’”
- Pavel Pepperstein

David Ter-Oganyan and Alexandra Galkina, members of the younger generation of Russian artists, have already attracted an international following. Living and working in Moscow, they reflect on the essence of socially engaged art, from the avant-garde up to the present, within the context of today’s issues.

The Gang 2 resembles a huge poster. The scene it evokes hearkens back to the mass agitation/propaganda (“agitprop”) of the first post-Revolution years. Teams of entertainers, both amateur and professional, presented multi-disciplinary shows aimed at instilling new social and political values among the people. The rough figures that seem to be brandishing weapons and the familiar geometric abstraction of The Gang 2 parody revolutionary ideology, cult-like artistic dogmatism, and contemporary reverence for the legacy of the historical Russian avant-garde. 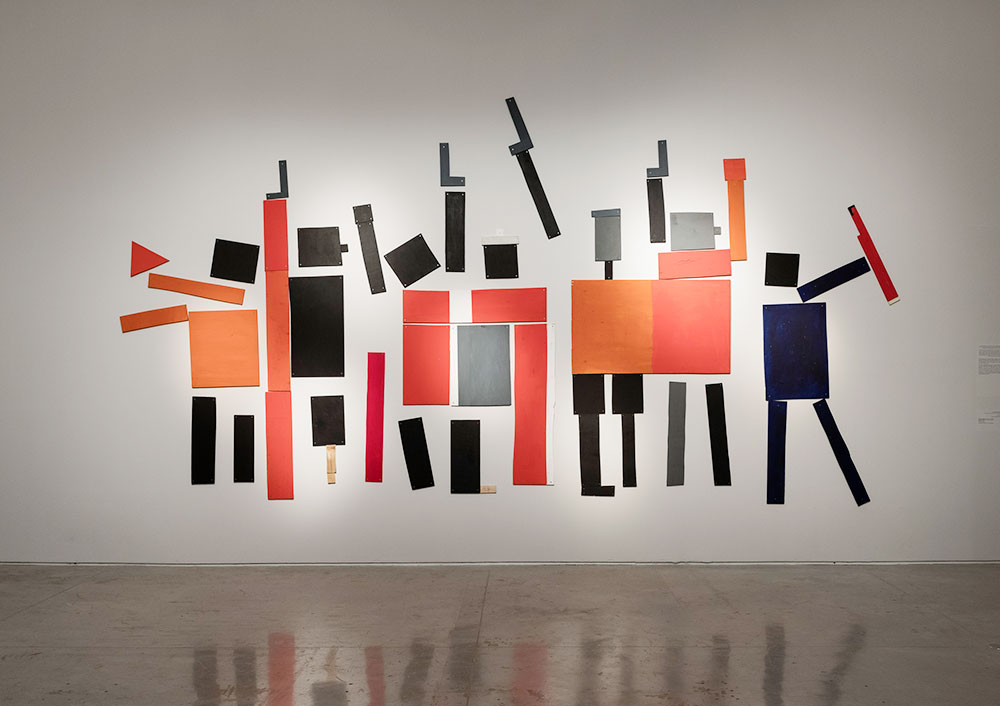 Active from the second half of the 1980s on, Andrei Filippov represents the new wave of Moscow Conceptualism. His works usually combine image and text with familiar symbols.

Rimu-Rim! ironically analyzes the nature of Soviet ideology while playing with the notion (going as far back as the Middle Ages) of Moscow as the “Third Rome.” The text in Filippov’s print meaning “Rome to Rome” resonates with the Russian words Miru – Mir of the Soviet slogan “Peace to the World” and is constructed from tiny two-headed eagles – his trademark. This image from the emblems of the great empires that succeeded Rome – Byzantine, Holy Roman, Austro-Hungarian, and Russian – symbolizes Soviet totalitarianism, drawing an analogy between ancient empires and the modern superpowers.

The words are set against a tricolored background referring to the Russian flag. A small human figure about to leave the red strip and enter the dark blue forest represents the  defenselessness of the individual against the forces of history and ideology. 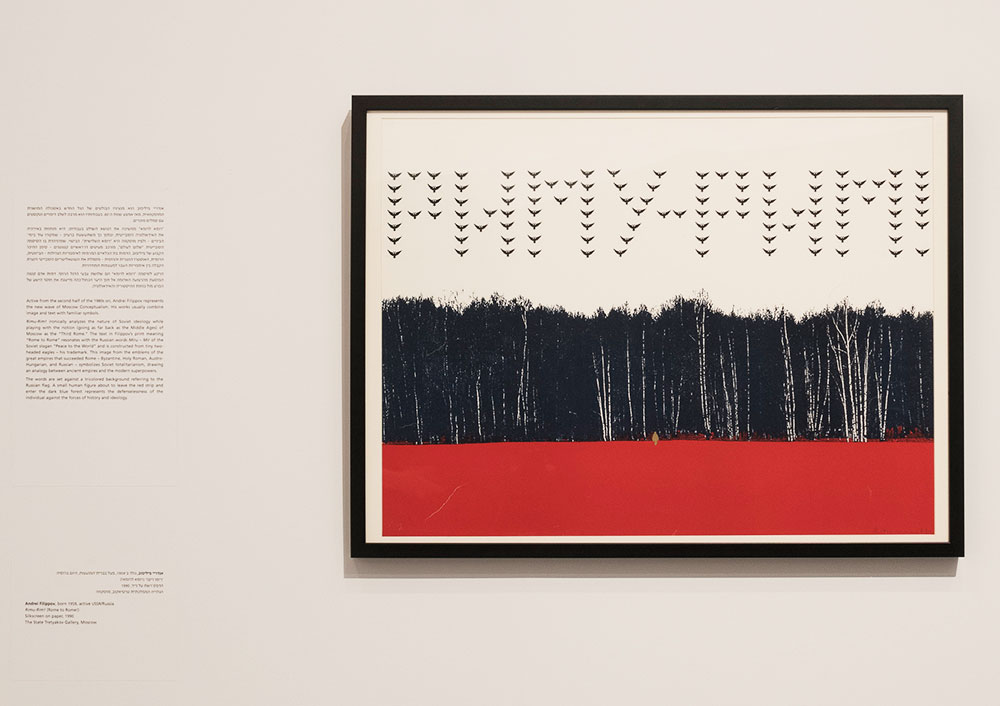 Graphic artist and art theorist Mikhail Karasik was a leading practitioner in the genre of the artist’s book. To the Affirmer of the New Art celebrates two of the Russian avant-garde’s most inspiring figures: Kazimir Malevich and the absurdist poet Daniil Kharms. Karasik mythologizes the figure of Malevich by inserting the artist and his ultimate creation, the Black Square, into the historical context of the 1920s and 1930s, using complex techniques that deftly combine archival documents and photographs with his lithographs. Malevich achieves the status of deity whose cosmic influence stretches across time to include the Suprematist utopia he envisioned.

Presented here is Taras Sgibnev’s witty animation based on Karasik’s work, which resuscitates Malevich in a new medium that heightens the theatricality of this recasting of history.

Mikhail Karasik, Taras Sgibnev, To the Affirmer of the New Art, 2010, Video animation, Collection of the artist, Mikhail Karasik © Karasik: Idea and Script