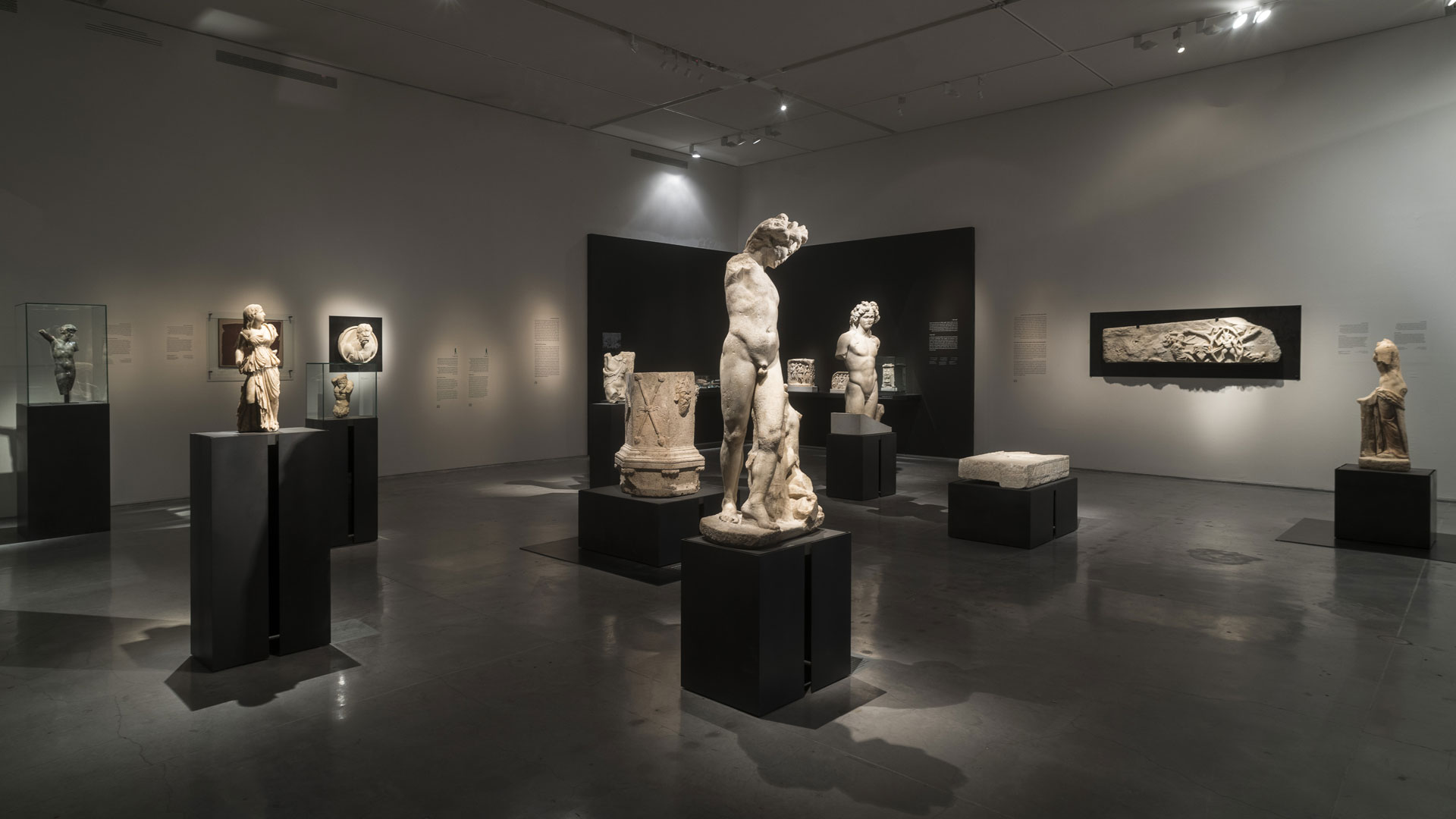 Pan, Lord of Shepherds and Slayer of Beasts

This statue of Pan from the Athenian acropolis, shows Pan wrapped tightly in a mantle shielding himself from the cold air and carrying a panpipe (syrinx). Often portrayed as a watchful shepherd, he led the beasts in his care from summer to winter pastures, ever concerned for their fertility and well-being. Yet for all his gentleness and compassion, Pan was also a hunter, the “slayer of beasts,” with a hunter’s keen eyesight. Moreover, he was capable of inducing “panic” in humans and beasts alike, turning gentle souls into deranged, carnivorous beings.

Pan is seen here seated on a rock, pipe in hand, with a curved, gnarled throwing stick used for hunting hares at his feet. The master piper and lover of dance was often portrayed playing joyful music and dancing with the nymphs or with the boisterous, drunken retinue of the god Dionysus. His greatest gifts to humankind were laughter and good humor, which, coupled with his sexual vitality, ensured the fertility of the fields and the flocks. He was not only associated with music but also with the sounds of nature — the echoing hillsides, the cry of the wind, and the call of beasts. 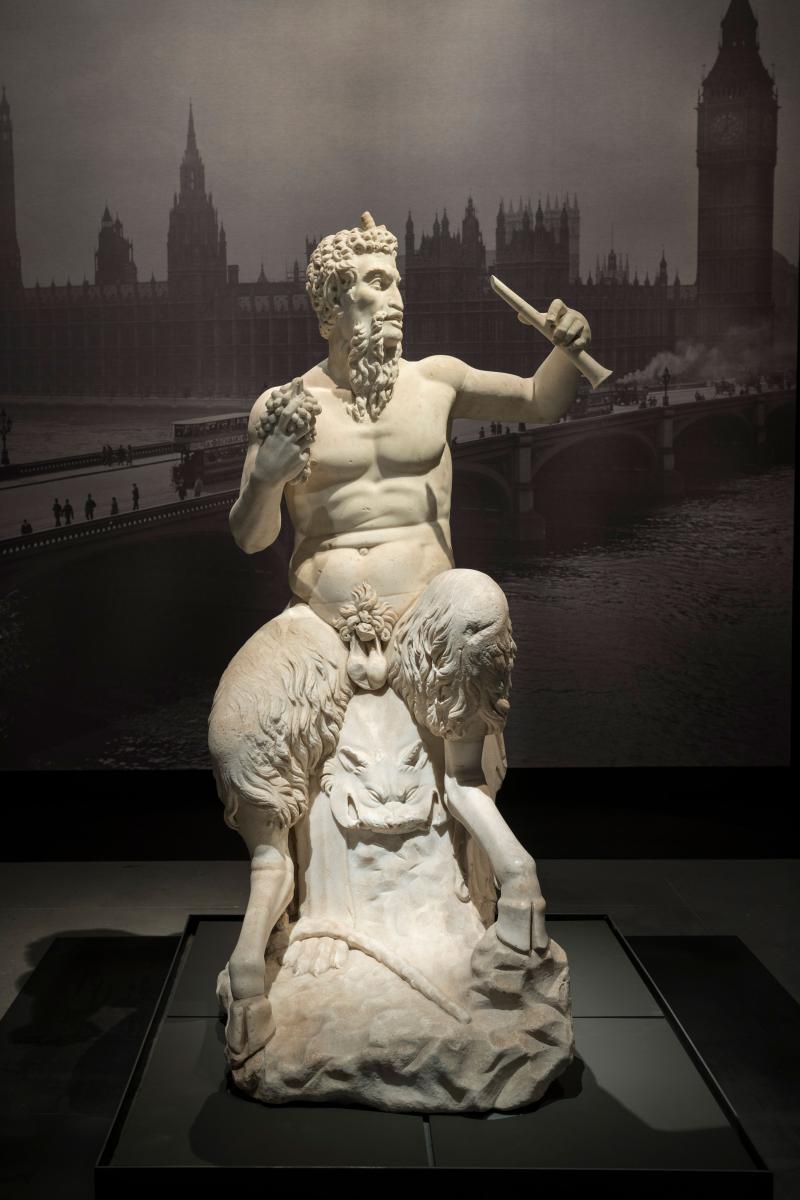 From Divine Goat to Graceful Youth

Pan’s physical appearance underwent many changes over time. In his earliest representations, dating from the 6th–5th century BCE, the goat-god was depicted simply as a goat walking on its hind legs, piping merrily, dancing, and sometimes with a prominent phallus. Eventually, this image became less common, and Pan’s torso, legs, and face underwent a steady process of humanization. From the 4th century BCE onward, two main representations of the god prevailed: that of a rough-looking, bearded, caprine man with great horns, a tail, and cloven hooves; and that of an idealized young god, whose animal traits were limited to two small horns, pointed ears, and a discreet tail. Interestingly, following the rise of Christianity in the post-classical era, the former model became the fixed representation of the Devil. 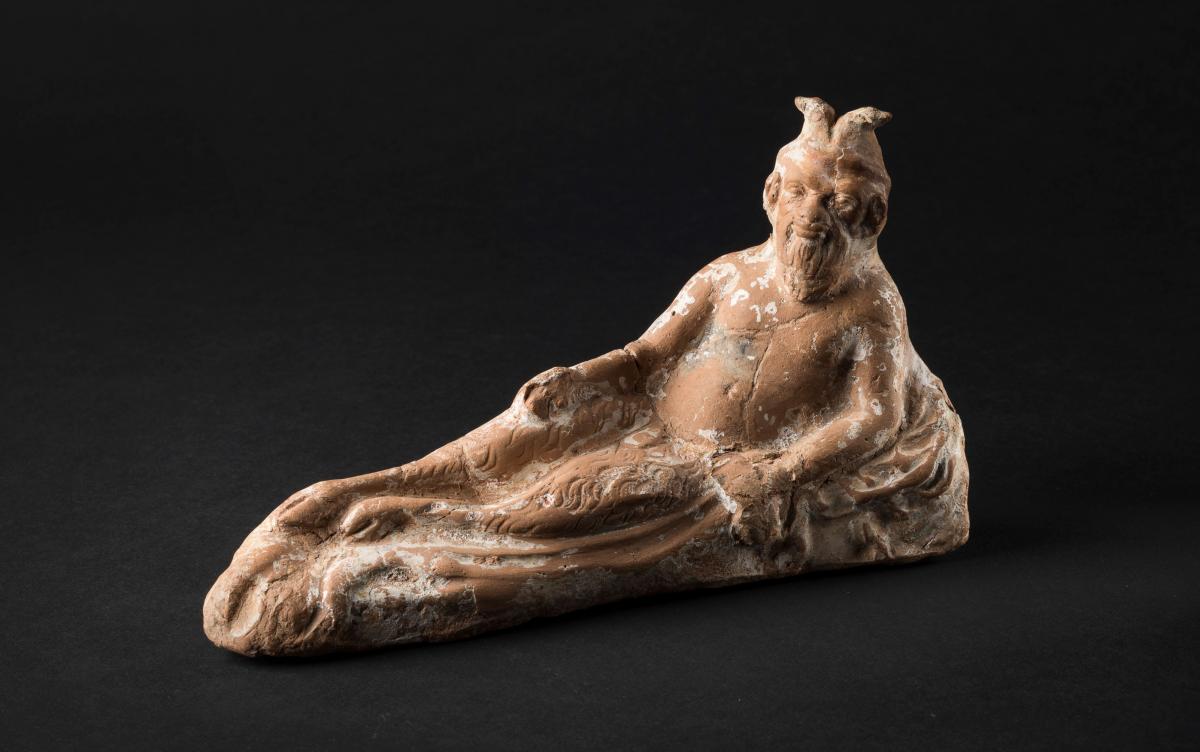 The Wild God of Nature Refined

This youthful, humanized depiction of Pan testifies to his evolution from the wild goat-god of nature to the civilized god of the town, a process that culminated in the 3rd—1st century BCE. The caprine aspects of his character have been reduced to two small horns, barely discernable through the soft curls falling gracefully across his adolescent forehead. The god that appears in both art and literature from the Hellenistic Period onward is no longer the fearsome, ferocious, remote, and undomesticated Pan of Archaic and Classical times, but rather a benevolent deity of a gentler, more accessible wilderness, lord of a magical landscape in which mountains and forests resonate with the singing of nimble-footed nymphs and the music of Pan’s pipes.

The Cult of Pan: From Arcadia to the Great Metropolis

Ancient sources all agree that Pan was from Arcadia. A mountainous country, difficult to reach, Arcadia in the Peloponnese was portrayed in classical times as an almost mythical land inhabited by poor villagers, who toiled the hard, barren soil, but whose principle source of wealth lay in their great flocks of goats and herds of horses. In the 5th century BCE, Pan’s cult finally left the borders of Arcadia and arrived in the city of Athens. From there, it spread quickly across the Greek world and beyond. Pan was popular with both poor country folk and affluent city dwellers. Commonly worshipped in natural caves or in open forest shrines, usually located on the outskirts of the city or town, he was an accessible god, approached by his followers with laughter, good humor, clapping, and dancing. His official public cult, observed on specific days throughout the year, involved elaborate processions culminating in the sacrifice of a goat, a communal meal, drunken jollification, and an all-night vigil.

This relief, probably part of a sarcophagus, represents the god Pan enclosed in a cave, with the god Dionysus seated opposite him, playing on pipes. In Arcadia, Pan was worshipped, like other gods, at shrines set up in large temples, gatehouses, stadia, gymnasia, and baths, but spaces dedicated to Pan outside Arcadia typically assumed the form of a natural grotto, positioned symbolically at a distance from the urban centers. It would seem that when Pan set foot outside his mythical homeland, the grotto came to stand for the image of Arcadia itself and all it entailed. 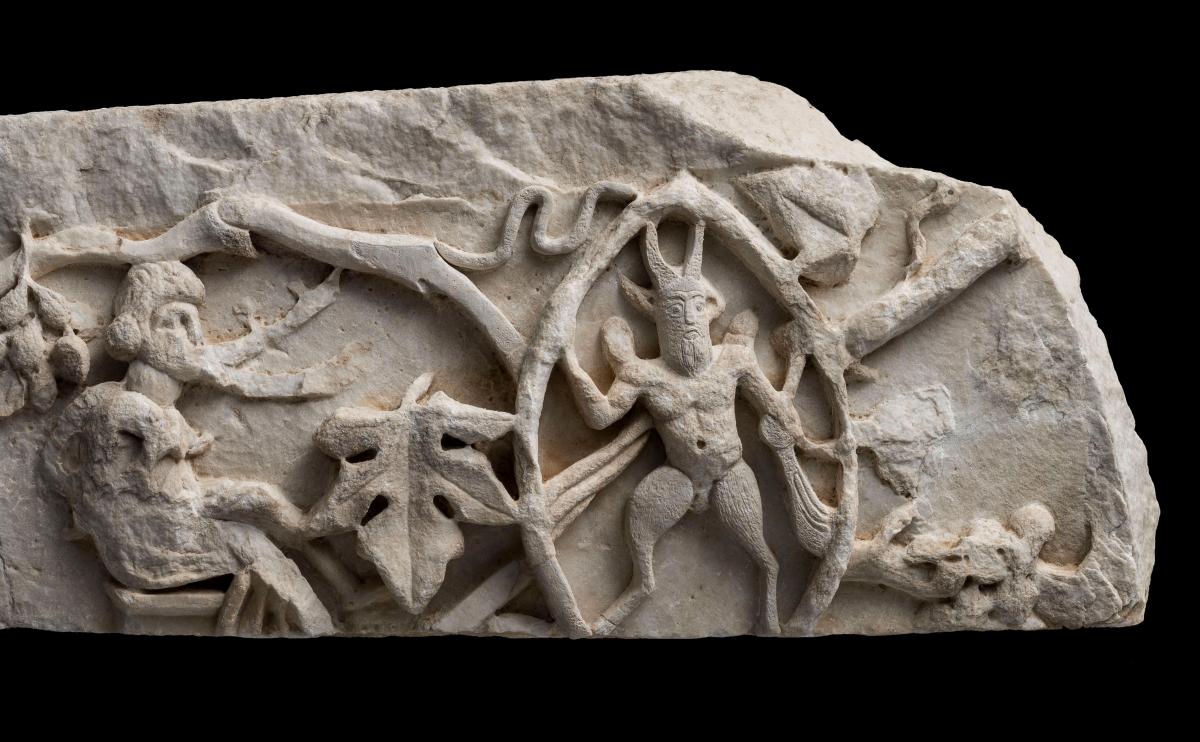 The Cult of Pan at Banias

One of the shrines to Pan in our region was situated at the northern site of Banias (Caesarea Philippi). Known as the Panion, it was in use from the 3rd century BCE through the 5th century CE and served the pagan population of the town and its environs. When Pan’s cult was first established there, the site was far removed from any urban center. At its heart was a large natural cave, beneath which one of the sources of the Jordan River issued. Literary sources provide little information about the site or the cultic activities that took place there, except for an interesting description by Eusebius, the 4th century bishop of Caesarea, who mentions a festival rite during which a live goat was cast down into the cave, where it was believed to disappear miraculously, owing to the god’s power. Archaeological excavations at Banias uncovered evidence of additional rituals, mainly cultic banqueting and the offering of simple gifts. Over the centuries, a city grew around the shrine, which itself expanded to incorporate the cults of Zeus, Hermes, Nemesis, the nymphs Echo and Maia, and even the emperor Augustus. 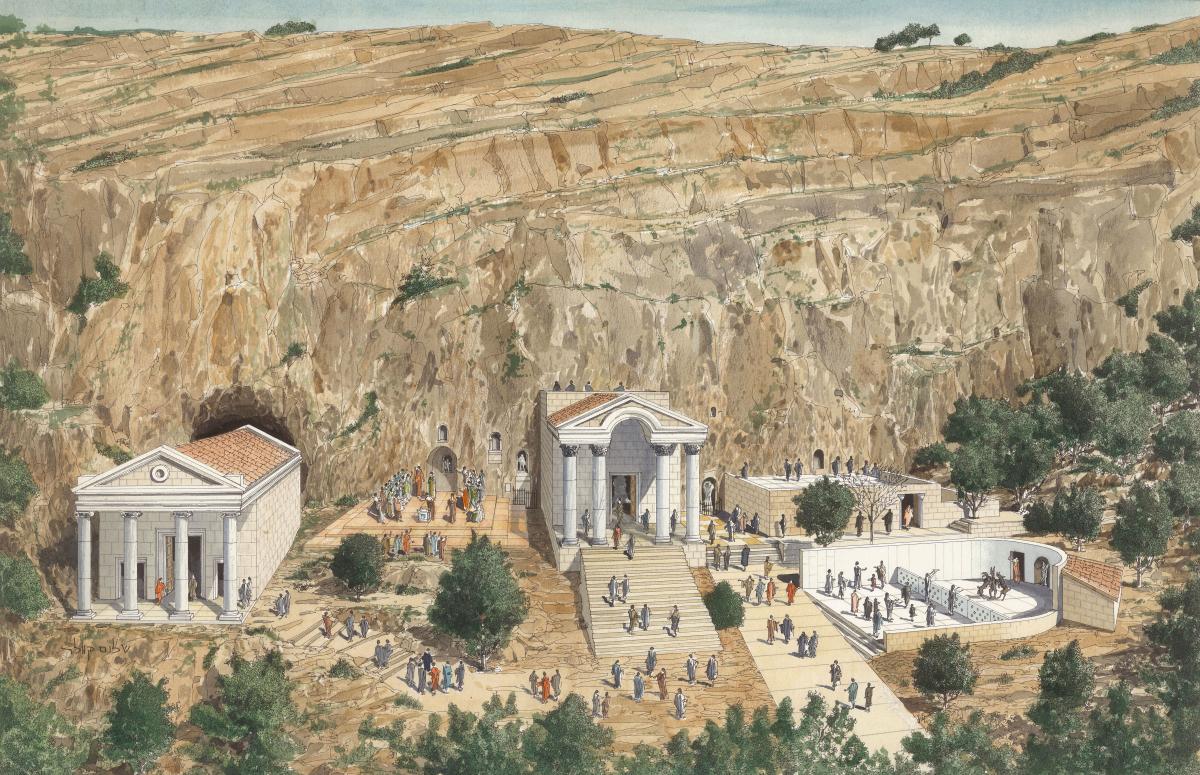 Proposed reconstruction of the cultic complex at Banias, by: Shalom Kweller

In addition to the god’s public cult, Pan was also worshipped by private individuals, who sought his assistance and counsel, turning to him with the familial invocation, “Dear Pan.” They held sacrifices, feasts, and celebrations in the presence of families and friends, and offered such gifts as figurines, votive plaques representing Pan and the nymphs, and even cooking utensils, dining ware, and oil lamps, which were placed in the sacred cave at the culmination of the festivities. 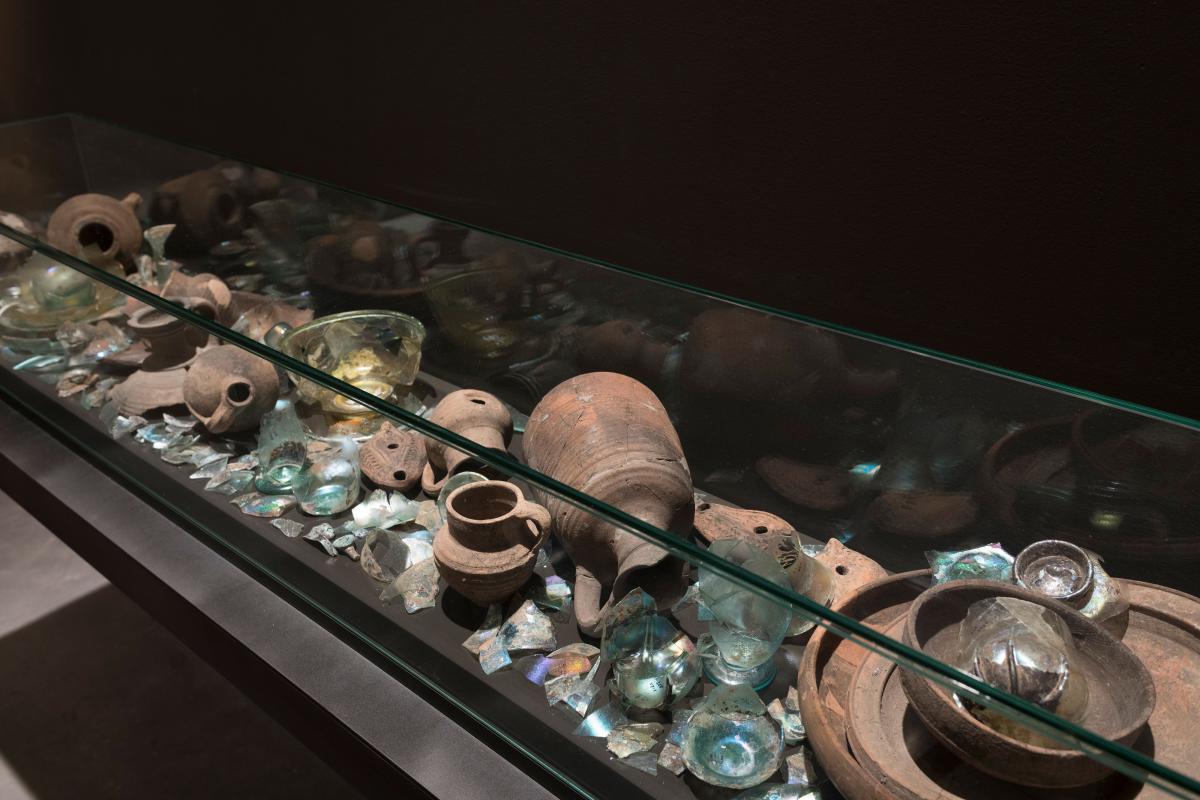 Pan and the Retinue of Dionysus

In ancient Greek art and mythology, Pan was often depicted as part of the wild and unruly retinue of Dionysus, god of wine and agricultural fertility and patron of the theater arts. Like Pan, Dionysus embodied extreme contrasts: love\ and mercy alongside cruelty and destruction; peace and merriment alongside havoc and madness. His orgiastic cult, which included music, drinking, and revelry, was intended to provide release from the drudgeries of everyday life and the confines of society. Besides Pan, Dionysus’s wild entourage also included Silenus, an elderly half man, half goat, who tutored Dionysus in his youth; satyrs, hybrid beings known for their lust and recognizable by their goat’s horns and horse’s tails and hooves; and maenads, Dionysus’s mortal female devotees. Pan differed from the other members the group, however, since he was a god, the only hybrid in Greek religion to attain divine status. 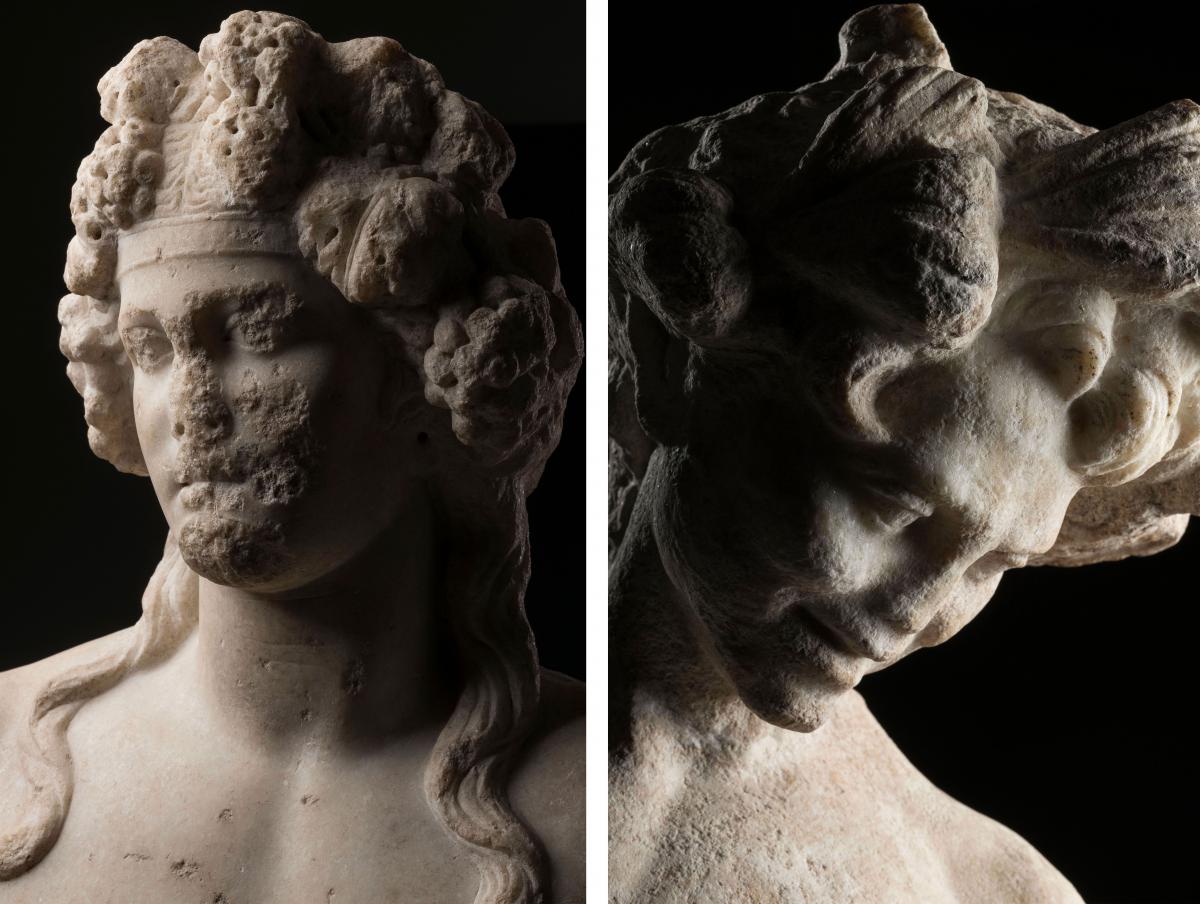 The Myth of Pan and Syrinx

Pan can be seen here riding a goat while playing his panpipe (syrinx), a throwing stick in hand. Though the sound of the instrument was soothing and uplifting, its music having the ability to fertilize the flocks and calm the animals, the tale behind its creation is a woeful and violent one. Syrinx was a chaste and innocent young nymph, who like many others, refused Pan’s advances. In trying to escape his violent sexual assault, she was turned by her sister nymphs into hollow water reeds. When Pan’s frustrated breath blew upon the reeds, they produced a beautiful, lamenting sound, and from them Pan fashioned his pipe. 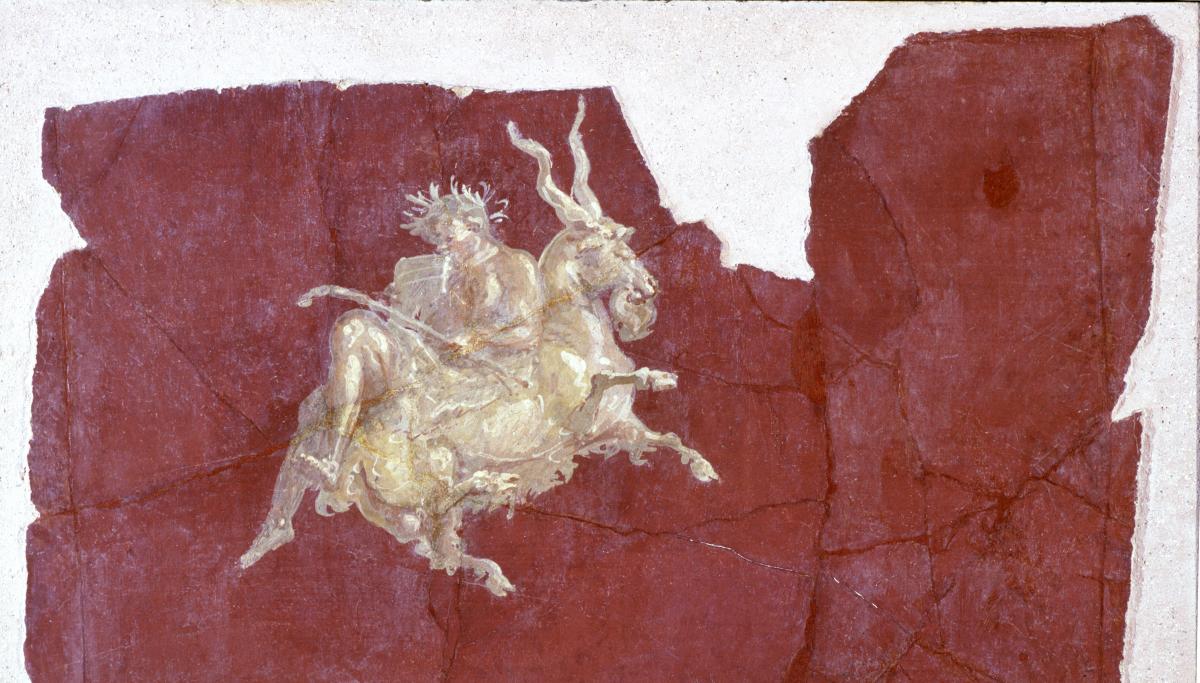 Nymphs were mythological beings perceived as the spirits of forests, brooks, and nature. They usually took the form of beautiful girls and were known for their love of music and dance and their ability to inspire prophecy and poetry. This river nymph stands with her upper body exposed. Her dress and cape, which cover her from the waist downward, still bear traces of paint. The statue served as a fountain, and the nymph’s hands, which have not survived, once held a seashell from which water flowed. 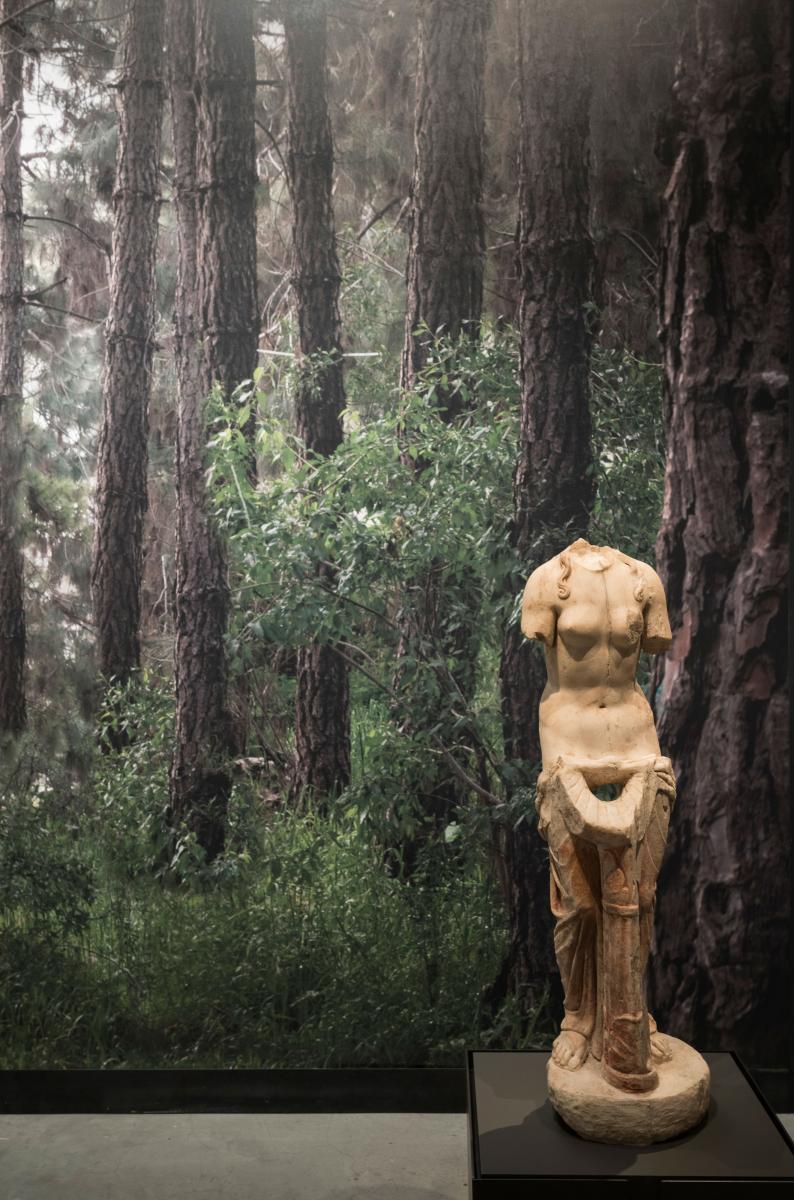