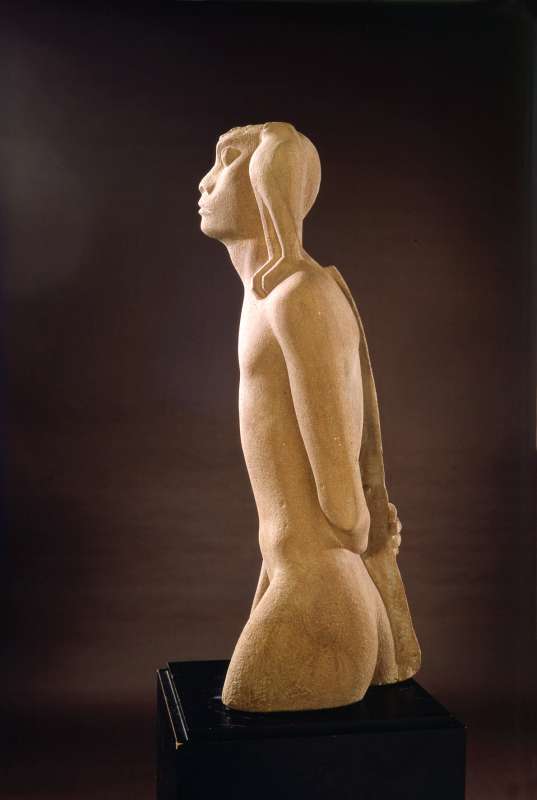 Nimrod is a landmark in Israeli art; no other sculpture provoked such strong responses when it was created or continued to fascinate and engage generations of viewers in the way that Danziger’s sculpture did.

The biblical character Nimrod is described as “a mighty hunter before the Lord.” But the root from which his name comes means “to rebel,” and in Talmudic literature, he is the despised idolater who erected the Tower of Babel in order to overthrow God. Nimrod, or Namrood, also features in ancient Near Eastern mythology as a mighty figure with divine powers.

Here he is portrayed as a man-beast with prominent sense and sex organs, a hunter-warrior whose bow has become his backbone. Danziger took the hawk on Nimrod’s shoulder from Egyptian art, underscoring the link between his sculpture and the ancient pagan world. The absence of legs likens the figure to an archaeological find, as does the reddish sandstone from Petra.

In the 1940s, a group of intellectuals calling themselves “Young Hebrews” identified closely with this sculpture. Dubbed “Canaanites” by their opponents, they connected to the ancient cultures of the land and called for a total break with Judaism and Jewish history. Nimrod became a symbol for many youngsters at the time, as the most extreme expression of a native identity based solely on this ancient geographic heritage.

Zalmona, Yigal, 100 Works from the Collections of the Israel Museum, Jerusalem, 1985