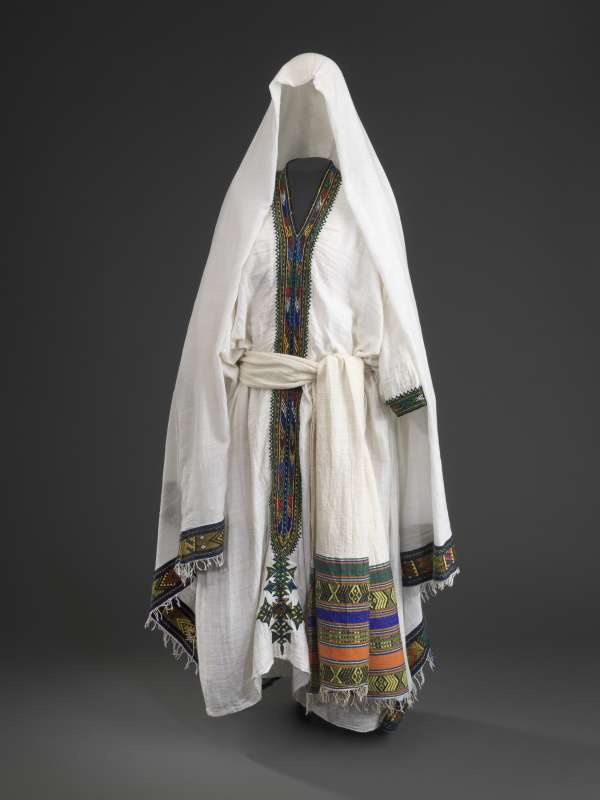 The white color, the narrow bands of decorative embroidery, and the woven colorful stripes along the edges are typical of Ethiopian dress, both Jewish and non-Jewish.

Traditional Ethiopian woman’s attire comprises three main items: a dress (qemis), a sash (mekenet), and a wraparound cloth (shemma or netela) worn over the head and shoulders. It is made from cotton textiles woven by the men from thread spun by the women, who also embroider the dresses.

The wide rectangular dress is made of two to four equally sized panels sewn together at the front and sides. An opening is left at the top front for the head and for breast-feeding, and two openings at the sides for the arms.

The women embroider their dresses using cotton thread in a chain stitch, mainly in black, green, red, blue, and yellow. The composition on the dress follows a similar design: a narrow, densely embroidered band surrounds the neck opening and joins a wider band down the front ending, with a cross-shaped pattern. A shorter, similar composition appears on the back. The sleeve openings are also adorned with embroidered bands. The embroidery uses symmetrical geometrical motifs that carry amuletic and symbolic significance meant to guard sensitive areas of the woman’s body. The most popular theme among both Jews and non-Jews was the cross-shaped pattern (mesqel), resembling ceremonial crosses used by Ethiopian priests to bless believers. Following their exposure to world Jewry in the early twentieth century, Ethiopian Jews in some villages chose to emphasize their identity by adding new motifs, such as the Star of David and the menorah to their embroidery.

The waist sash is a long, 40-cm-wide rectangle woven as a single unit. Both ends are decorated with colorful woven stripes. The sash ritually separates the pure upper body from the impure lower body.

The wearer’s social status, occupation, and even mood are conveyed by the way she wears the shemma wraparound. When worn around the body and shoulders in a shawl-like manner, it alludes to an optimistic mood, but if one end drags on the floor and the other is tossed towards the other shoulder, it symbolizes sadness. To protect oneself from the evil eye, a corner of the shemma covers the mouth, but when covering the nose it may connote pride. Besides its use as outerwear during the day, it may also serve as a blanket at night.