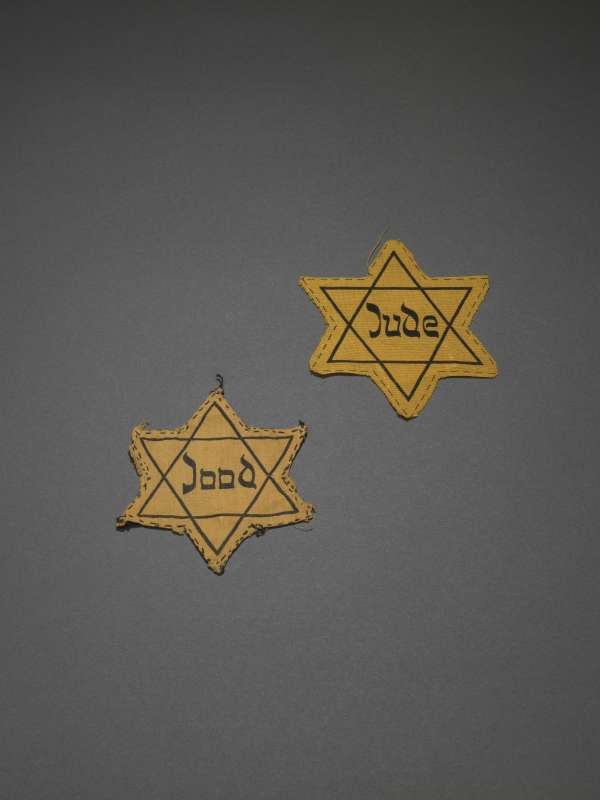 “I tore the yellow Star of David with the word ‘Jude,’ meaning Jew in German, off my clothes on May 8, 1945, when Theresienstadt was liberated. I, of course, felt tremendous relief. On that day I was reborn. May 8 became my second birthday. On September 1, 1941, Jews in Germany were ordered to sew this symbol on their clothes as a distinguishing mark, and that badge of shame had in German eyes branded me for four years as an outcast to society.” (from Inge Auerbacher, “Beyond the Yellow Star to America”)

The history of Jewish costume is inseparable from the history of the Jewish badge, the distinctive sign that political and religious authorities compelled Jews, throughout the Diaspora, to wear in order to differentiate them from the rest of the population. In both Christian and Islamic countries, badges to identify Jews had been used since the eighth century.

During the Nazi period, the mandatory wearing of a Jewish badge as a mark of identity was introduced in Nazi-occupied territories, beginning with Wloclavek, Poland, on October 28, 1939. German legislation effective September 1, 1941, provided that “Jews who have completed their sixth year of age are forbidden to appear in public without a Jewish star,” and similar legislation took effect on June 1, 1942, in France and Holland.

This distinctive sign commonly took the shape of a yellow Star of David. It combined the color yellow, which had negative connotations in European culture and was already associated with the marking of Jews in Islamic lands and Europe, with the Jewish star, a symbol adopted by the Jews themselves. It consisted of a cloth patch “the size of a palm of a hand, drawn in black on yellow material, with the inscription ‘Jew’ in black.”

Jews would affix it “on the left breast of [their outer] clothing, clearly visible and strongly sewn on.” The initial “J” or the word “Jew” would be inscribed in different languages, depending on the country where it was worn, in a script meant to evoke Hebrew letters.

Jews were responsible for acquiring, distributing, cutting, and sewing the badges, and were required to wear them at all times, outside and inside the ghettos, and to every occasion, even at weddings. Jews who did not wear the badge or otherwise respect the regulations could be punished severely.