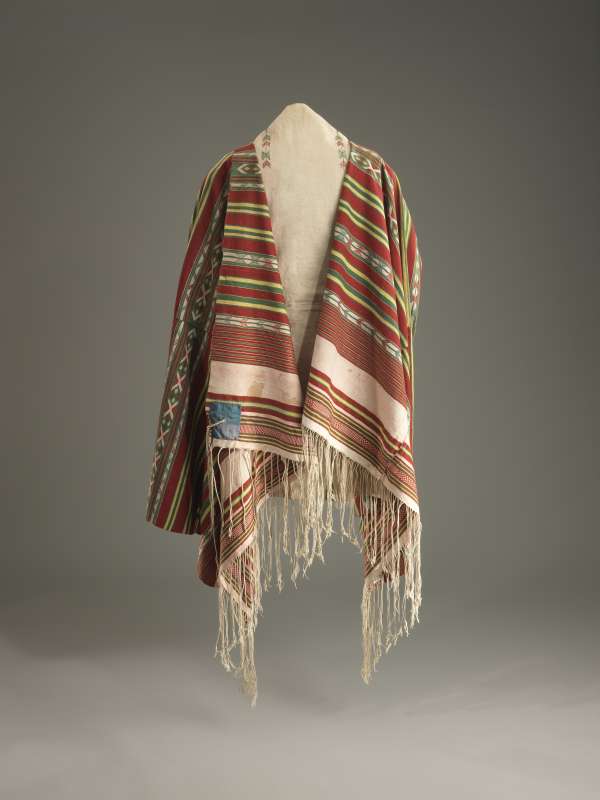 In Yemen, the biblical commandment (Num. 15:38-39; Deut. 22:12) to attach tassels (tzitzit) to the four corners of one’s garment is fulfilled by attaching tzitzit to the four-cornered outer garment worn daily; in other communities, where daily attire is not four-cornered, special ritual garments—the prayer shawl (tallit) and the vest-like tallit katan—have come to be used for this purpose.

The Jews of Yemen wore several types of four-cornered garments to fulfill the tzitzit precept. In Sana'a and on the Central Plateau, an everyday black woolen shawl worn over the shoulders served as a tallit. This type of shawl was an integral part of the Jewish male’s dress in the region, and the indicative offwhite ritual tassels hung from its four corners. A more precious version made of highly refined black wool was worn in this region on the Sabbath.

The garment’s Yemeni Arabic name shamleh recalls the Hebrew word simlah, used in the Bible. Both words carry the idea of a wrapped outer garment that envelops the wearer, as does the tallit when worn during prayers. As a four-cornered garment, the shamleh was subject to the commandment to bear tzitzit, and wearing it allowed one to fulfill the commandment with an article of clothing that served daily functions. In addition to being an article of clothing, it served as a blanket when resting, or a bag for bundling and carrying goods.

In rural Yemen, all men, Muslims and Jews, slung a striped, brightly colored cotton shoulder-cloth around their upper body called a lih feh or masnaf, edged with a woven band and fringes. On the four corners Jews added the ritual tassels, identifying themselves as Jews.

In southern Yemen, the tallitot were woven in color schemes of green, red, and yellow on an off-white background. These were the standard outer garment in this region, either rectangular in shape, or poncho-like with a hole or slit in the middle for the head, similar to the tallit katan (a small, four-cornered garment worn to enable one to fulfill the tzitzit commandment if one’s regular outer garment was not four-cornered). Silk squares were sewn on to reinforce the four corners where the tassels were fixed.

Skilled Jewish weavers made these garments. Among Yemeni Jews, weaving was a widely practiced and highly respected profession, one that was considered to require special skills. In the poncho-like tallit, the edges around the head and neck opening were embroidered with stitches typical of the area. At the turn of the twentieth century, the Ashkenazi white rectangular tallit with its blue or black stripes along the shorter, fringed hems, called shal in Yemen, frequently replaced the traditional Yemenite prayer shawls. See photo from the archive.