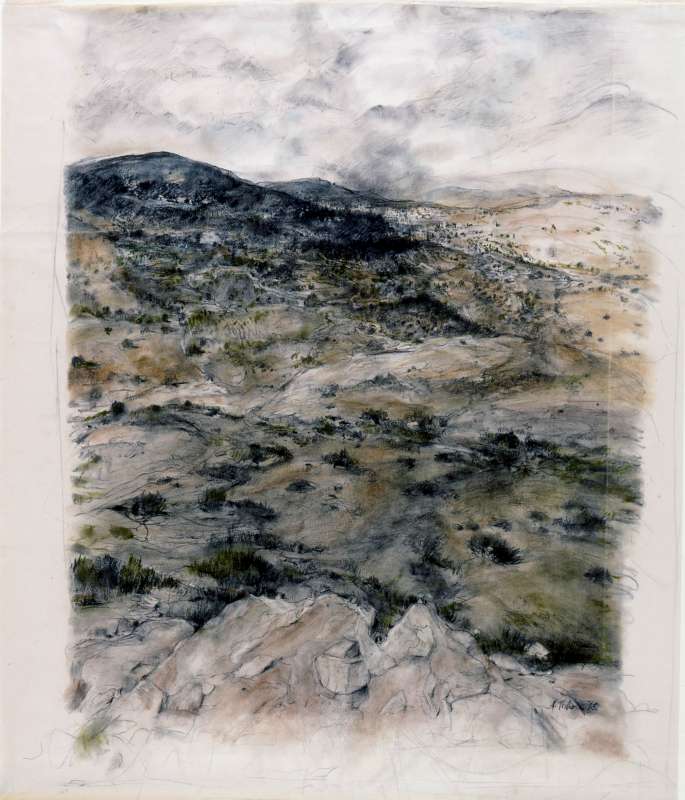 Charcoal and pastel on paper

When Anna Ticho left Vienna for Palestine in 1912, she was already a skilled painter whose work reflected the influence of the European masters and of contemporary Viennese art. Jerusalem, where she settled, became a central theme in her oeuvre; at first she concentrated on its houses and people, later shifting her gaze to its surrounding landscape, the Judean Hills. As befits the character and colors of the Jerusalem landscape, she drew almost exclusively in shades of black and white. Whereas her early, small-format drawings were executed in pencil or ink directly from nature, the drawings from the last fifteen years of her life are considerably larger and often include touches of color that break the monochromatic scale. These works are mature, free, expressive, and personal - the fruit of many years of contemplating nature and absorbing its forms, colors, and movements. Such a drawing is the work seen here; in it Ticho exploited to the utmost the inherent characteristics of the soft charcoal and pastel lines, creating an illusion of space and depth through the interplay of light and color and by employing a high, panoramic viewpoint.