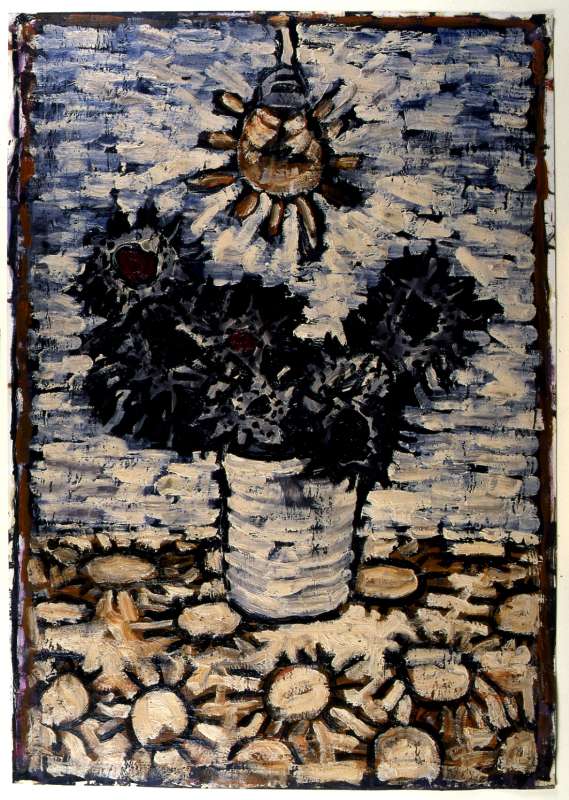 Born into a traditional Muslim family in Umm al-Fahm, Asim Abu Shakra moved to Tel Aviv in 1982 in order to study art. A cactus in a flowerpot became the recurring image in his work. The word for this cactus, sabra, (tzabar in Hebrew), was used already early in the 20th century to describe a new generation of Jews born in - and thus rooted to - the land of Israel, and it has become the common name for native-born Israelis Jews. The term reflects the cactus's centrality to the local scenery; in rural Palestinian society, rows of sabras used to demarcate parcels of land, and they are a characteristic feature of the landscape.

Abu Shakra re-appropriates this symbol, but his reclaiming of the cactus leaves it confined to a narrow pot, unable to spread its roots, and illuminated by artificial light. The loaded image is both collective and individual; the tragic displacement of the Palestinians from their lands and villages resulting from Israel's War of Independence in 1948 and the personal tragedy that struck the artist when he was diagnosed with the cancer that killed him a year later, aged 29. The sunflowers that cover the table are Abu Shakra's homage to the many expressive and emotive descriptions of this flower by Vincent van Gogh, an artist he greatly admired, who also had a short and ill-fated life.