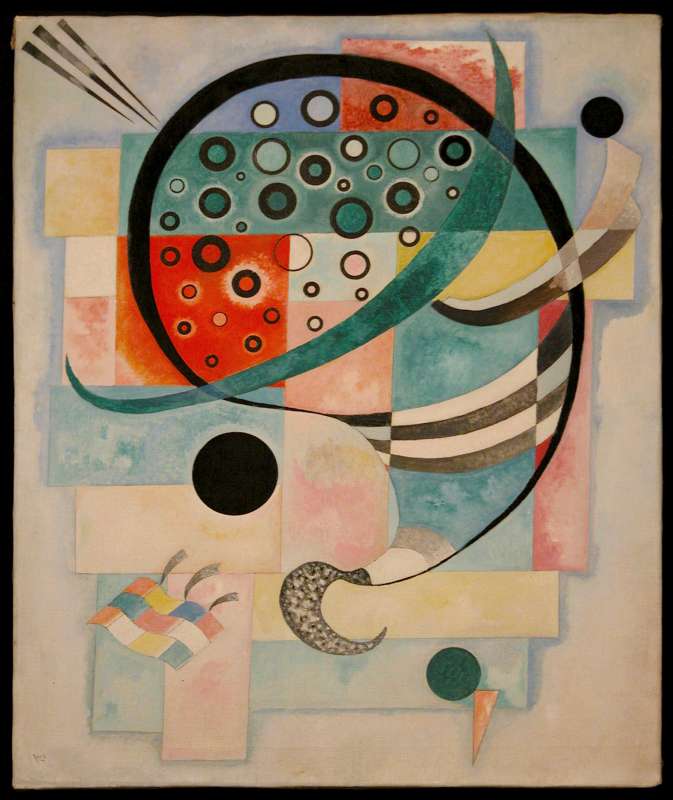 While at the Bauhaus, where he began teaching in 1922, Kandinsky abandoned his Expressionist Blaue Reiter style in favor of a methodical examination of color, form, and sensation. A year after the 1933 closing of the Bauhaus by the Nazi regime, the artist, with the aid of Marcel Duchamp, moved to Paris, where he spent the final decade of his life. The change of location brought about a shift in his work. Influenced perhaps by Jean Arp, Kandinsky’s formerly rigid lines curved into lighthearted biomorphic forms, although he still often used a compass to create perfect geometric shapes.

Fixed consists mostly of light pastel colors, with more saturated areas of red and green toward the top of the composition. The patchwork of squares and rectangles is reminiscent of the work of Kandinsky’s lifelong friend Paul Klee. The whimsical organic black forms, such as the large apostrophe and the rings of varying thickness contained within it, recall images one might see under a microscope, reflecting the artist’s fascination with embryology and the natural sciences.