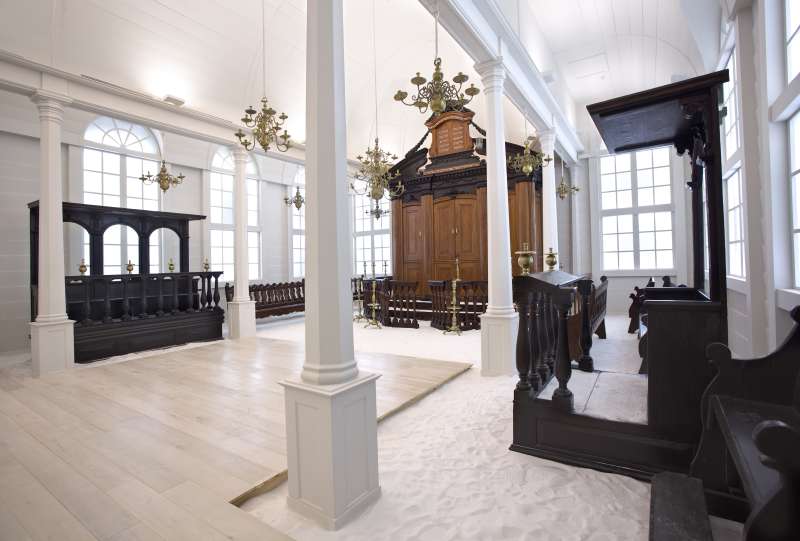 Founded in Paramaribo, the capital city of Suriname, in 1736, the Tzedek ve-Shalom synagogue is a typical example of Spanish and Portuguese synagogues in the New World.
The republic of Suriname - formerly known as Dutch Guiana - is a tropical country situated on the northern coast of South America, just above Brazil. In the mid-17th century Jews of Spanish and Portuguese origin, who had fled to Holland during the Inquisition, were among the early European settlers in Suriname. They established sugarcane plantations along the Suriname River, to which they gave biblical names, and founded a village in the Savanna, which they called “Jerusalem on the Riverside.” Also referred to as the Jewish Savanna, it became the center of this remote colony until the middle of the 18th century, when most of the Jews moved to Paramaribo.
Formerly situated in the middle of a large courtyard, the Tzedek ve-Shalom synagogue is a neoclassical wooden building, rectangular in shape and painted white. Flanked by three arched windows, the central entrance leads to a wide basilica-like hall whose salient features are typical of the Spanish and Portuguese tradition: The reader’s platform (tevah) is located opposite the Torah ark (heikhal); the benches for the congregants run along the walls, facing the center, and among them are more prominent benches dedicated to the leaders of the community (parnassim) and the head of the community; and majestic brass chandeliers of Dutch manufacture, inscribed with the names of the donors who offered them to the synagogue, hang from the ceiling and between the colonnades. Allied with these features are others which are characteristic of the local, regional architecture, such as the plain, symmetrical structure; the white walls and large windows that invite the sunlight; and the sand-coated floor.
Directly inspired by the Esnoga, the great Portuguese synagogue of Amsterdam, the Tzedek ve-Shalom synagogue reverberates with old memories while embodying novel architectural features. It is a clear reflection of the character of the Jewish community of Suriname - a community that enjoyed relative freedom of worship and took an active part in the life of the surrounding society.