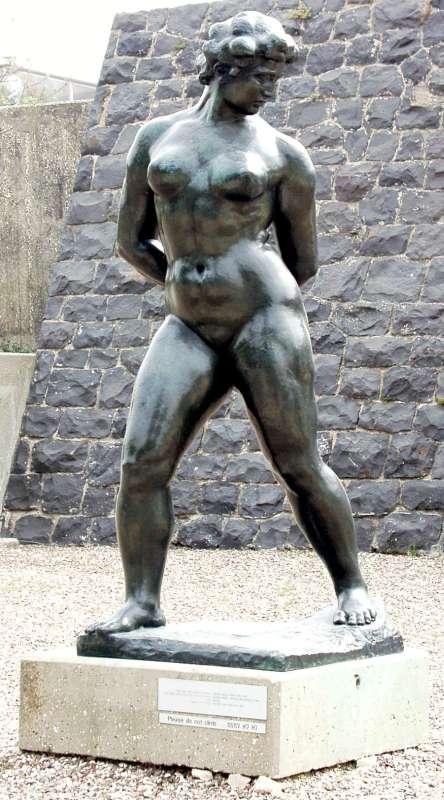 In the early years of the twentieth century Maillol, like Bourdelle, adopted a simple, clear, and harmonious style, inspired by archaic sculpture and opposed to the tenets of academism. This new direction evinced a break with the sculptural mode of Rodin. Both artists represented the nude figure, but whereas Rodin focused mainly on its expressive and dramatic aspects, Maillol looked for serenity and poise, and in contrast to Rodin's agitated, lumpy surfaces, his sculptures are smoothly worked and devoid of tension. Under the influence of Matisse, his lifelong friend, he embraced a simplicity of line and form, and a geometric reduction of the human figure, eschewing the imitation of nature and individual traits. This reductive tendency finds expression in Action Enchained, which represents a nude female figure with generalized facial features, her hands tied behind her back, yet striding forward resolutely. Rather than portraying a specific woman, then, the sculpture symbolizes an abstraction—the aspiration for freedom. It is also, however, a posthumous homage to a public figure: Auguste Blanqui.

The French freedom fighter Auguste Blanqui (1805-1881), devoted his life to civil rights, persistently rebelling against the various regimes that succeeded one another in France in the course of his adult life, from the monarchy installed in 1830 to the Commune of 1871. This unswerving revolutionism landed Blanqui in prison on and off for thirty-five years, until his death at age seventy-six. He was buried at the Père Lachaise cemetery in Paris, and Dalou's moving bronze portrait of the deceased, prostrate Blanqui, installed on the grave in 1885, turned it into a meeting point for his numerous supporters. Following their request that a monument be erected in his memory, Maillol received the commission for a sculpture in 1905, and less than three years later it was inaugurated at Place Blanqui in the town where Blanqui was born, Puget-Théniers.

Throughout the nineteenth century, numerous monuments were erected in France to commemorate personalities of social and political significance, but for the most part they were represented according to traditional norms, standing on a pedestal or lying prostrate on the grave, and some monuments represented the solemn funerary procession itself. Maillol's sculpture was totally unlike the one installed on Blanqui's grave, which depicted him as a lean and bony man, marked by hardship and suffering. In fact, Action Enchained did not portray the person being honored, and - to boot - was the only commemorative monument of the Third Republic to render homage to a politician with the image of a female nude, sparking opposition and controversy among the local citizens, who prudishly forbade their children to play at Place Blanqui “lest they be taken by Satan.” Finally, in 1914, the monument was moved to another city square where, mounted on a high base, it was concealed behind treetops.

Maillol's decision to employ the image of a nude woman can be explained by the fact that he had specialized in this motif since the late nineteenth century. Furthermore, the female nude turns the monument into a universal personification of freedom, bringing to mind Delacroix's famous Liberty on the Barricades of 1830, or America's equally renowned Statue of Liberty, created in 1870 by Auguste Bartholdi and presented to the American people by the French government to commemorate France's support for the colonies during the American Revolution.

Action Enchained stands out among Maillol's sculptures in the large scale of the figure and in its dynamic movement and inner tension, conveying the feelings of a rebel who spent the larger part of his life behind bars. Seen from the front, the figure's forward stride, raised chest, and resolute gaze radiate heroic strength, but viewing the sculpture more closely the spectator will note the sideways tilt of the head and the pensive, sad, and surprisingly youthful expression of the face. This contrast is made the more poignant by the hands fettered behind the figure's back. The sculpture's disparate elements convey tension between freedom and confinement, strength and weakness, masculinity and femininity. Thus the woman's face is strikingly similar to that of Michelangelo's David, her hair is short and boyish, and her taut, assertive posture "manly" rather than "womanly." This androgynous quality enhances the sculpture's universal aspiration—the figure being Everyman, at once male and female, and belonging to no distinct class. Divested of social and historical attributes, it becomes a symbol of freedom as an all-embracing concept, expressing the values of the Third Republic at the turn of the century during a period of political extremism that threatened to undermine these values - as evinced, inter alia, in the Dreyfus Affair and its recriminations.