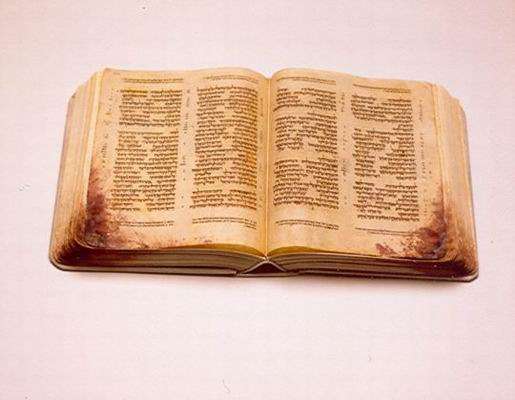 The Aleppo Codex is the earliest known Hebrew manuscript comprising the full text of the Bible. It is also the most authoritative, accurate, and sacred source document, both for the biblical text and for its vocalization, cantillation and Masorah (literally, "transmission" of the Bible, the oral and written tradition by which the Holy Scriptures have been preserved and passed on from generation to generation). The Codex was copied by the scribe Shlomo Ben-Buya'a over one thousand years ago. The text was then verified, vocalized, and provided with the Masorah by Aaron Ben-Asher, the last and most prominent member of the Ben-Asher dynasty, which shaped the Hebrew text of the Bible. It was probably the manuscript used by Maimonides when he set down the exact rules for writing scrolls of the Torah.

The Codex was written in Tiberias in the early tenth century, looted and transferred to Egypt at the end of the eleventh century, and deposited with the Jewish community of Aleppo in Syria at the end of the fourteenth century. The rabbis and elders of the community guarded it zealously for some six hundred years. During the riots against Jews and Jewish property in Aleppo in December 1947, the community's ancient synagogue was put to the torch and the Codex, which was kept in the synagogue's "Cave of Elijah," suffered damage, so that no more than 295 of the original 487 leaves survived.

In January 1958 the Aleppo Codex was brought to Jerusalem, where it remains until today.

Pearlman, Moshe, The Dead Sea Scrolls in the Shrine of the Book, The Israel Museum, Jerusalem, 1988, English / Hebrew