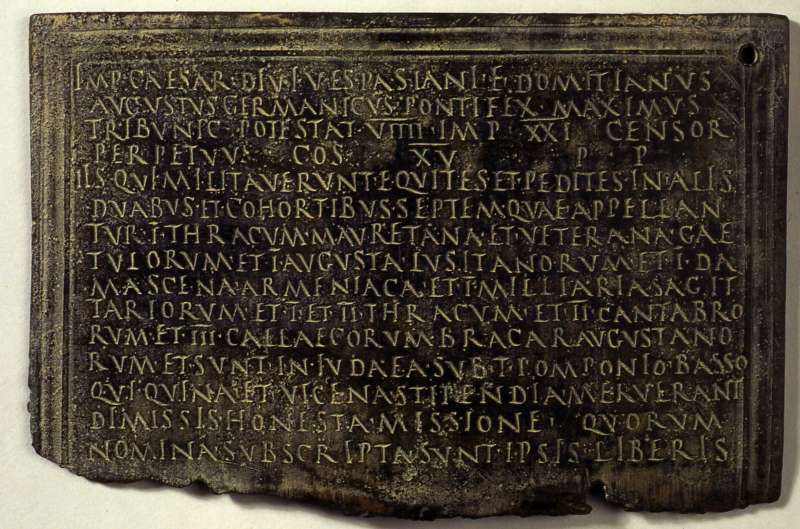 Acquired in memory of Chaim Herzog, sixth President of the State of Israel, by his family and Yad Chaim Herzog; The Carmen and Louis Warschaw Fund of Archaeological Acquisitions; and David and Genevieve Hendin, New York

A military diploma is the personal copy of the imperial grant (constitutio) of rights and privileges bestowed on a Roman soldier who had served in one of the provincial forces of the empire for a minimum period of twenty-five years. Usually issued when the soldier's service came to an end, the original, legally binding constitutio was inscribed on bronze tablets in a public place in Rome, while the diploma was given to the beneficiary himself. The most important right it bestowed was that of citizenship for the soldier, his spouse, and his children-a powerful incentive for inhabitants of the provinces to join the Roman army. The text of the personal diploma was inscribed on two bronze tablets, which were closed together with twisted wire. This was done in order to avoid forgery: by inscribing the text on the inside of both tablets and, on the outside of one tablet and affixing the seals of seven witnesses to the outside of the second tablet, it was possible to verify that the text had not been tampered with. Pictured here is the upper half of the first tablet of such a diploma, issued in the year 90 CE to a soldier who had completed twenty-five years of service. We are told that he was stationed in the province of Judea during the governorship of Titus Pomponius Bassus. Although Pomponius Bassus is familiar from other sources, it is only here that we learn that he served as governor of Judea. The diploma also names two cavalry squadrons (alae) and seven cohorts (cohortes) stationed in Judea in 90 CE, shedding important light on the strength and movements of Roman auxiliary forces at the time. Unfortunately the soldier's name and the unit in which he served are not found in this portion of the text. We therefore do not know if he was stationed in Judea in the years 66-70, and if he participated in the Romans' suppression of the Great Jewish Revolt.