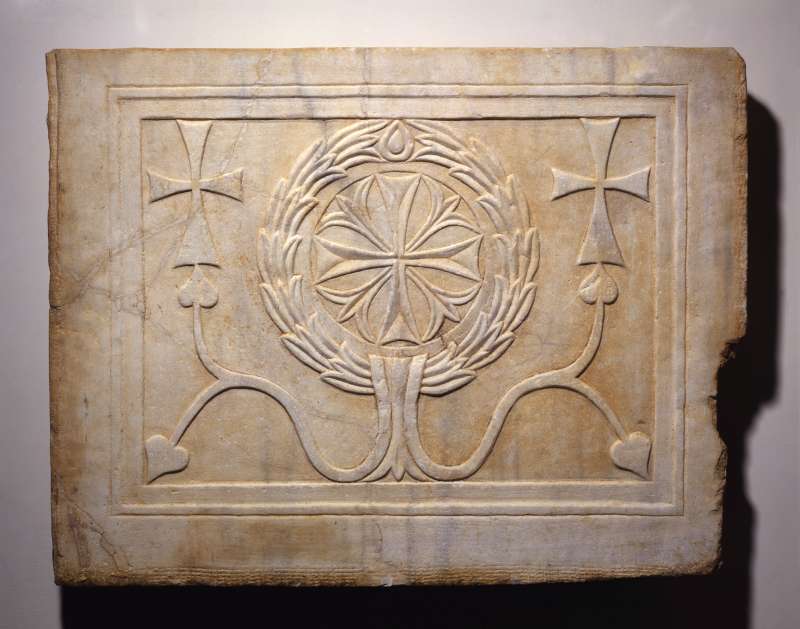 The chancel screen, which separated the bema from the rest of the hall, consisted of square colonnettes interspersed with carved slabs, held in place by grooves that ran along the sides of the colonnettes. Many of the screens are made of marble and may have been imported from the large marble quarries of Greece. Screens made of local stone, undoubtedly carved in this region, were also common. It is not unusual to find identical motifs on both the marble screens and on those made of local stone. All the chancel screens have a carved border, but the motifs inside this border are highly varied. Nevertheless, it is possible to discern several common types, which recur with only slight variations. A motif depicting a blossom with crosses inside a laurel wreath was particularly popular. Screens of this type have been unearthed in churches all over Israel and Jordan. A similar motif, in which the blossom-cross is replaced by a menorah, is also found in synagogue screens of the period. Another type of chancel screen is decorated with the motif of a cross on the hill of Golgotha; it is occasionally flanked by a pair of symmetrically arranged gazelle, ibex, or birds. A screen of this type still stands in St. Catherine's Monastery, Sinai. Tables - round, rectangular, and sigma-shaped - were also an important part of the church furnishings. The tabletops were made of marble, local stone, or bituminous stone, which is easy to carve. They rested on wooden legs or bases (which have not survived) or on marble legs carved to resemble columns, complete with bases and capitals, which were sometimes fixed to the floor. The altars were usually rectangular. Tables were also used for reading, for receiving the gifts of the faithful, and, perhaps, as secondary altars in the cult of the martyrs that took place in the side apses.