Todi Ragini-Page from a Ragamala series 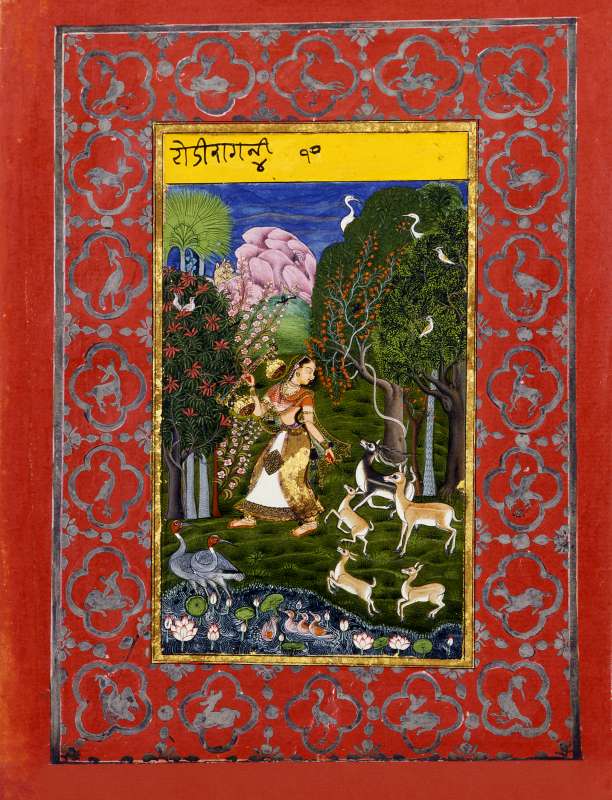 Todi Ragini-Page from a Ragamala series

The term "Rajput painting" refers to the indigenous Indian paintings made for the Rajputs, the Hindu group comparable to the feudal lords of medieval Europe. Many Rajput courts supported a school of painters who recorded activities of the nobility: amorous exploits, hunting expeditions, and festivals; as well as legends from Hindu mythology. The paintings were used to illustrate opulent books, which in time were taken apart and their pages dispersed. A Ragamala series (literally translated, "a garland of melodies") is a set of thirty-six paintings that are visual interpretations of Indian musical modes. Each mode expresses a certain mood and emotion.

Todi Ragini presents a lady with henna on her hands and feet, holding an Indian lute and walking in a forest glade of flowering trees. This ragini personifies loneliness: the lady's plaintive music has attracted deer and birds, mostly in pairs, but she is solitary. The artists of the Bundi school were particularly adept at depicting lush vegetation and using landscape to convey drama and emotion. The quatrefoil border containing deer and various birds, which has become gray through oxidation, was originally silver in color.