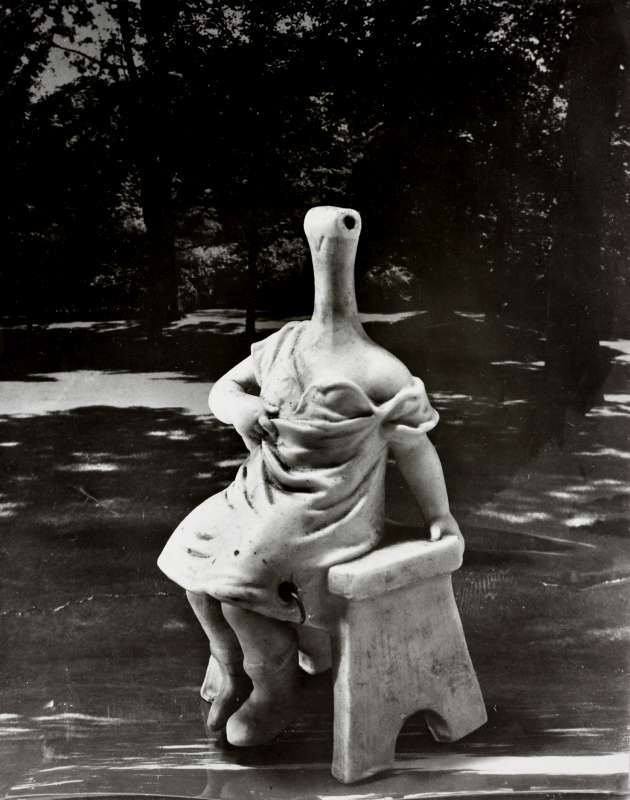 Mainly known as Picasso's companion and inspiration for nearly ten years, as well as for modeling for many of the leading Paris photographers and artists of the 1930s, Dora Maar (born Henriette Theodora Markovitch) was also one of the most provocative and creative artists of the period. Maar studied with the painter André Lhote and opened a photography studio in Paris from the late twenties until 1937. Deeply influenced by the Surrealists, she joined the movement in 1936 and became friendly with Paul Eluard, André Breton, and Georges Bataille, with whom she became romantically involved. In spite of her relatively short photographic career, her artistic accomplishments in the field place her among the most important creators of the twentieth century. Her visionary and often radical photographic work, which reached its greatest heights in the mid-1930s, included cityscapes, architectural studies of historic buildings, fashion photography for magazines, and portraiture, along with iconic Surrealist images and experimental prints using double exposure, collage, and photomontage.

The cryptic 29 rue d'Astorg, which eventually became a photomontage of the Orangerie at Versailles bearing the same title, was considered one of the masterpieces of Surrealist photography and found its place in numerous Surrealist exhibitions including Fantastic Art, Dada, Surrealism at The Museum of Modern Art, New York, in 1936. It was also included in the famous series of twenty-one Surrealist postcards published in Paris in 1937 by Georges Hugnet.