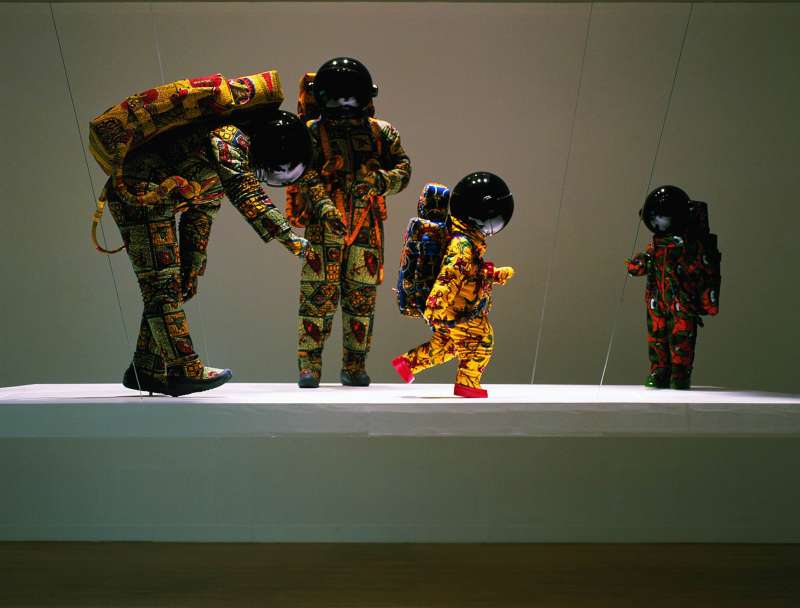 Gift of the Contemporary Art Acquisitions Committee of American Friends of the Israel Museum, New York

Born and living in London, but educated in Nigeria, Shonibare has posed as a black Victorian dandy, parodied the seriousness of the formal Modernist tradition of Western painting by using canvases with patterns of "African" fabrics, and dressed mannequins in Victorian costumes made out of those same fabrics. The history of these textiles is a key feature of Shonibare's art, enabling him to raise questions about the relationship between high and applied art and between the first and third worlds. His use of them alludes to the fact that these "African-style" textiles (which he purchased in Brixton market in South London) are based on Indonesian designs and batik techniques and were adopted by Dutch colonizers for fabrics manufactured in Holland and England for export to West Africa. In the 1960s they became popular as part of a postcolonial celebration of African identity.

Vacation shows a life-size nuclear family of astronauts equipped for an interplanetary holiday, wearing spacesuits made from the "African" textiles. At first glance, Vacation seems an innocuous, play space exploration with its implications for science and human progress. However, with their wax-printed patterns, the spacesuits address the sharp contradictions between the postcolonial, undeveloped, impoverished African continent and the most advanced scientific achievements of the Western world, stressing the complexity of the colonized-colonialist-explorer paradox. (Are the colonized ironically becoming the colonialists of the newly explored planets in the universe?)