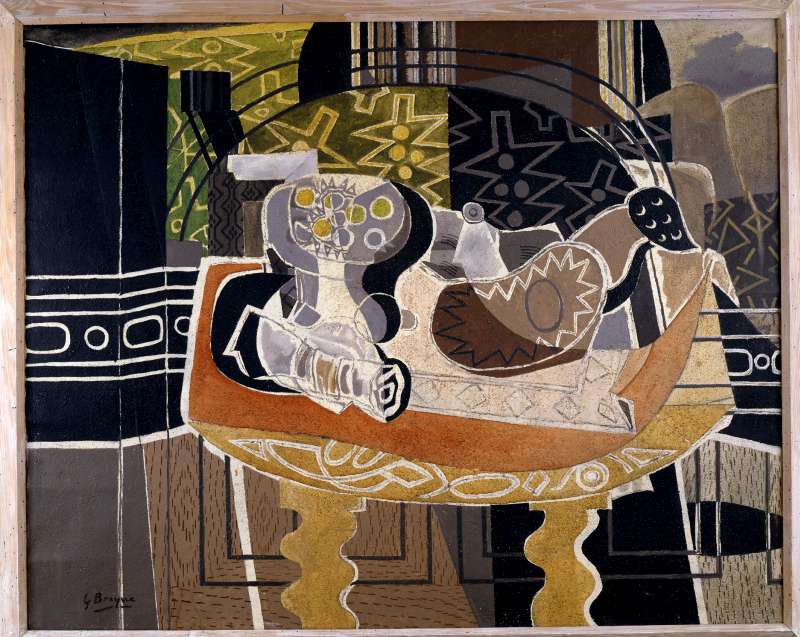 Oil and sand on canvas

Gift of Charlotte Bergman, New York and Jerusalem, to American Friends of the Israel Museum

Starting from as early as 1908, the still life played a dominant role in Braque's output. Some two-thirds of his paintings are still lifes, in which he enlisted a recurring repertoire of objects in a seemingly infinite diversity of variations. The mandolin, bowl, and sheet music that appear in Still Life with Mandolin are among his earliest subjects, having already emerged in 1908. The gueridon table is first seen in 1911-12, while the use of wood graining, paneling, and dado and wallpaper designs are motifs that make their debut in 1912. These last bear witness to Braque's early training as a peintre decorateur, and add a textural dimension to the work that is enhanced in Still Life with Mandolin by the mixing of sand in the pigment. Last to come on the scene is the napkin, first included in 1928.

In our painting, the table takes center stage and is tipped forward so as to be almost vertical, while the corkscrew legs are viewed straight on. The legs anchor the composition to the bottom of the canvas, while the horizontal dado holds it solidly in place on both sides. Three curved lines above the table echo its form. The objects on its top are arrayed in modified Cubist style, making use of such devices as multiple points of view, intersecting and overlapping planes, shading in light and dark, distortions, and patterning.

Stylistically, this still life fits into a 1933-38 series of paintings featuring a table in a room that becomes more and more airy. Grand in scale and less hermetic than works done in preceding years, Still Life with Mandolin is one of Georges Braque's major paintings of the 1930s.