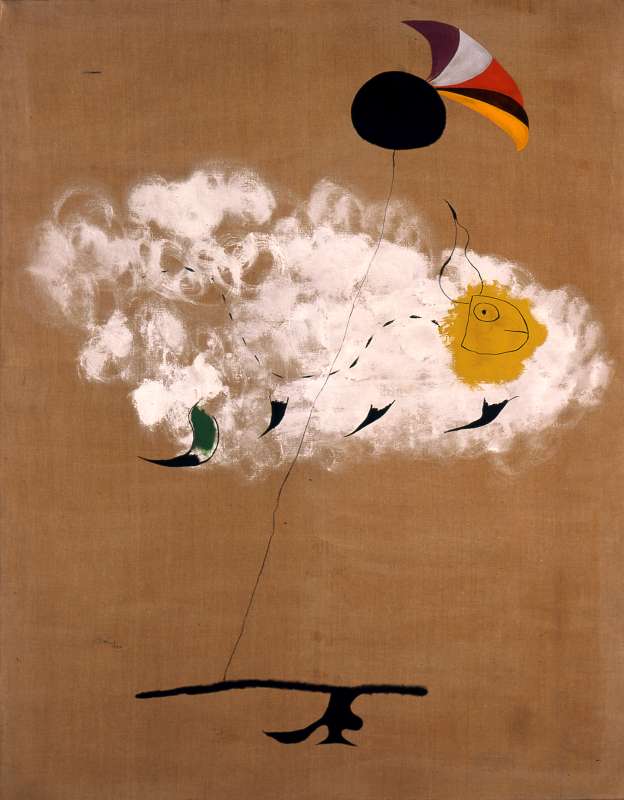 Gift of Sylvia and Joseph Slifka, New York, to American Friends of the Israel Museum

In this witty, fanciful painting, Surrealist Joan Miró combines vivid symbols of Spanish dance—a colorful mantilla, a flared skirt, and a pointed shoe—to convey the rhythm and subtle provocativeness of the dancer. Floating in a cloudlike white patch, a bull-like creature composed of fish- and foxlike elements recalls similar animal forms in Miró’s fantastical menagerie. Subverting conventional technique, the artist leaves the majority of the canvas bare, using the white pigment to represent perhaps the dancer’s skirt and to emphasize the surface of the painting. Miró’s fascination with Spanish dancers was manifest in at least nine works produced in Paris between 1921 and 1929. They draw on symbols and imagery recurrent in his oeuvre, yet they are rendered in a profusion of artistic styles, from Realism and Cubism to Surrealism and abstract collage. One of them, Spanish Dancer (1924), also in the Museum’s collection, conveys a dancer’s spinning movement and costume through a simple, geometric, steplike line and spiraling red dotted line.

In his paintings of Spanish dancers, Miró evoked traditional Catalonian art forms. After World War I, the Catalonia of Miró’s youth was transformed by political change and class conflict. Reacting against the prevailing militant nationalism, Miró hoped to introduce into modern Catalonia a cultural basis for civic unity. Inspired by Spanish dolls, Catalan figures, and folk art, with which he surrounded himself during his self-imposed exile in Paris, Miró was making reference to the timeless, bucolic landscape of his childhood.