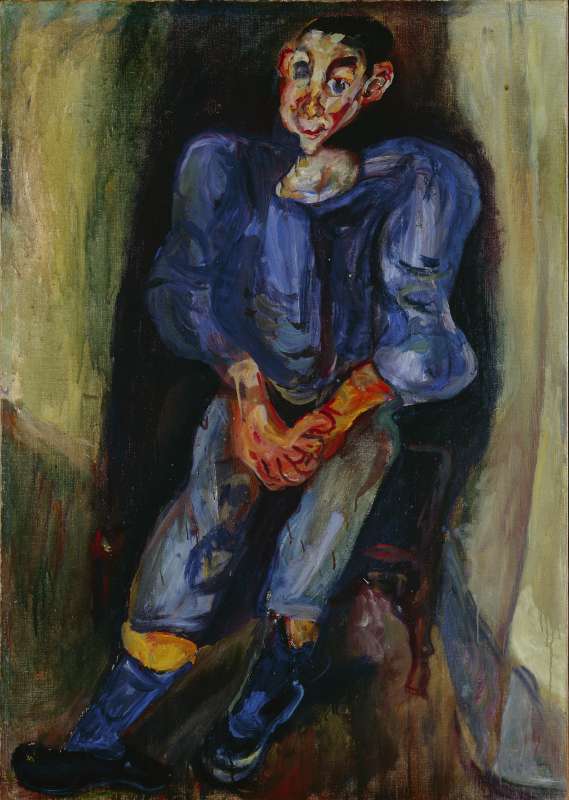 Gift of Stella Fischbach, New York, to American Friends of the Israel Museum

After settling in France in 1913, Soutine lived in dire poverty for a decade. His fortunes were reversed at the end of 1922, when the American collector Albert Barnes purchased a large number of his paintings, opening the way to international recognition and greater financial security. It was at this time that Soutine painted some of his most expressive and colorful canvases, including an extraordinary group of portraits.

Boy in Blue belongs to this group of portraits, which usually depicted individuals who were not close to the artist. Although the emotional distance allowed Soutine a degree of objectivity, and even though this painting is clearly a representation of a specific person, the projection of the artist’s inner turmoil onto the sitter is very apparent. The transference of feeling is manifest in the figure’s fluidity and the distorted forms. The composition resounds with elastic S shapes that repeat in the ballooning sleeves, the curve of the ear, the thigh, and the contorted wrist. The boy’s head seems precariously joined to his shoulders by his pointed chin, and there is a strong emphasis on his oversized ears and eyes and the enlarged, misshapen hands. Though great care has been lavished on the brushwork of the face, in areas such as the exposed chest and the lower right background runlets of paint further convey a sense of mutability. The youth’s optimistic smile is thus belied by Soutine’s formal language, which alludes to the fundamental fragility of the human condition.