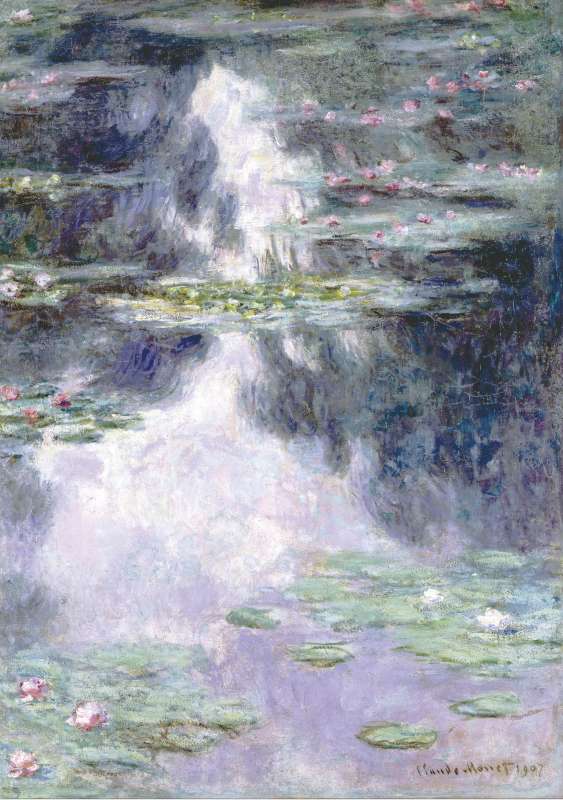 Gift of The Jerusalem Foundation from the Sam Spiegel Collection

From his earliest years as a painter, Monet’s art was rooted in the direct and prolonged analysis of nature. Throughout his career, he grappled with the task of developing techniques adequate to translating his sensations in a way that preserved the veracity of his visual experience. During the second half of the nineteenth century, he traveled a great deal in search of appropriate motifs. Toward the end of the century, however, he found that the most enthralling subject was to be found literally in his own back yard. All that he required to fulfill his aesthetic needs was within the limits of his own property at Giverny. It was there that he undertook the last of his great series, The Water Lilies. Except for the London and Venice paintings, Monet’s water gardens became his exclusive preoccupation and theme. He was absorbed in his work on this series, the culmination of his artistic career, from the late nineties until his death in 1926.

Monet exhibited a fascination with the attributes of water early on in his artistic career. Depictions of the theme appeared already in the 1860s and became more frequent in the following decades. Through the painting of water Monet found a means of concretizing his lifelong preoccupation with light and the ephemeral aspects of nature.

During the 1890s, Monet renovated the garden at his home in Giverny, introducing improvements that allowed him to cultivate water lilies in a pond on his property. It was around this time that he embarked on the cycle of tranquil and contemplative waterscapes to which he would devote himself for the last thirty years of his life. The first series of these paintings, which had the pond as its main motif and included the Japanese footbridge that spanned it, was exhibited in 1900.

By 1903 Monet was concentrating almost exclusively on the pond and its reflections, focusing more and more on the water surface alone. These paintings were begun directly from nature, with large areas of tonal contrasts and color accents being painted on the spot. It is likely, however, that some of the actual work was done from memory in the studio later, a working procedure Monet had developed in his earlier series paintings. Often he worked with a number of paintings from the series around him, enhancing the unifying elements that would be important when the works hung together. The second exhibition, comprising forty-eight canvases painted between 1903 and 1908, was held in May 1909 at Durand-Ruel’s gallery. Monet supervised the sequence and the hanging of the works that were all shown together in one room.

Pond with Water Lilies is from this second series. It presents a section of the pond, omitting all of the surrounding landscape. The water extends to all four sides of the canvas, leaving only the foreshortened lily pads to orient the viewer. On the calm surface of the water, reflections of clouds, sky, and trees provide reference points outside the pond. True to the Impressionist credo of an unadulterated presentation of the visual, Monet makes no distinction between the ellusive reflections and concrete reality.

The culmination of this great series, to which Pond with Water Lilies belongs, was a group of mural-size paintings executed between 1914 and 1923, and eventually installed in a setting created especially for them in the Orangerie Museum in Paris.