The Martyrdom of St. Bartholomew 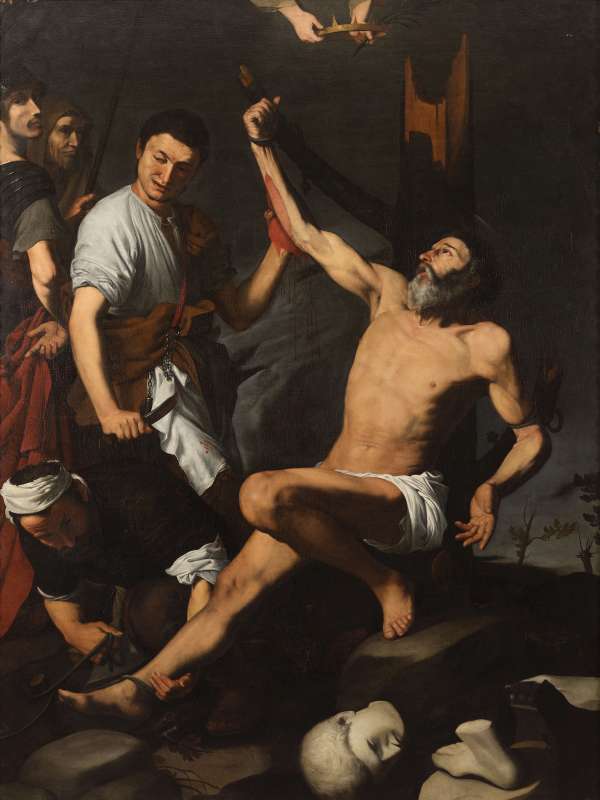 The Martyrdom of St. Bartholomew

Gift of Lila and Herman Shickman, New York, to American Friends of the Israel Museum

Considered the forefather of Spanish Baroque painting, Jusepe de Ribera introduced the highly expressive Neapolitan Baroque style to his native Spain and had an important influence on the work of Velázquez, Zurbarán, and Murillo. As a young man Ribera traveled extensively in Italy, absorbing the influence of the Renaissance masters, but most of all of Caravaggio, whose reckless lifestyle he even imitated.

In 1616 he settled in Naples, a Spanish possession at the time. His work was supported by the Spanish viceroys and left a lasting impression on the art of Naples.

This large composition, a refined and rare example of Ribera’s early style, presents the flaying of St. Bartholomew in Armenia, where the apostle preached the gospel and converted the king’s brother to Christianity. By order of the king, Bartholomew was captured, tortured, and crucified head down.

Ribera adapted elements from a Roman sculpture depicting the similar end of the mythological satyr Marsyas. He also drew on works by Ludovico Carracci and on Caravaggio’s Flagellation. In his poignant rendition of the subject, Ribera created a composition that is fiercely dramatic but nonetheless balanced and harmonious.