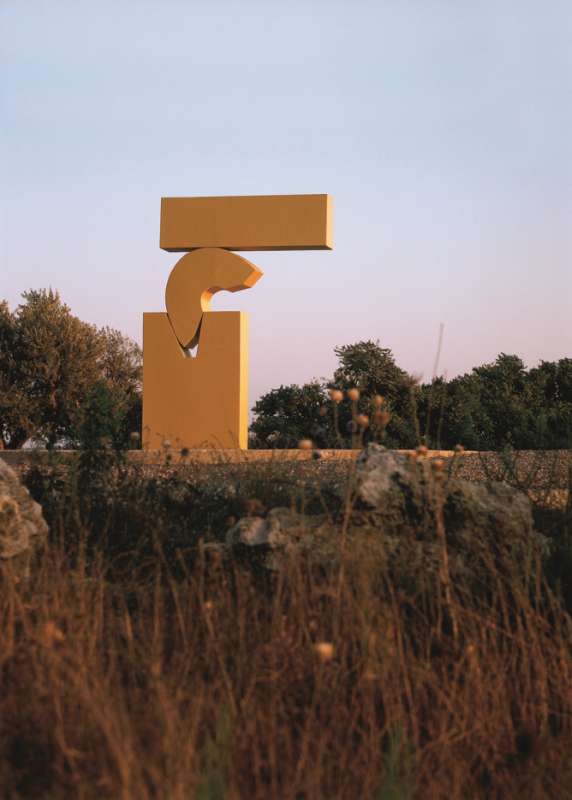 Gift of the artist, with the help of Audrey Sacher, London

The roots of Suspense lie in British Minimalism of the 1960s, which Kadishman came to know when he studied at St Martin's School of Art, under Minimalist Anthony Caro and others. Between 1961 and 1965, Kadishman developed his own language of sculpture, based on fundamental forms that seem to defy gravity. In 1966 the Israel Museum commissioned him to create a piece for its new Art Garden; the result was this large metal version of two smaller works in different materials he had created in London.

The interaction of opposites gives Suspense its power. It seems heavy and dense, and yet part of it appears to float in the air. The work is constructed according to careful calculations of equilibrium, but at the same time it reflects Kadishman's strong affinity for nature, particularly for the desert. The resulting "suspense" is a modernist-minimalist expression of a desert phenomenon: eroded by wind and water, rocky masses come to be so precariously balanced that the slightest movement can bring them tumbling down. Kadishman chose to paint his sculpture industrial yellow, "the color of the tractor in nature," as he explained. Thus the work simultaneously addresses a natural phenomenon and human interference with nature.

Zalmona, Yigal, 100 Works from the Collections of the Israel Museum, Jerusalem, 1985