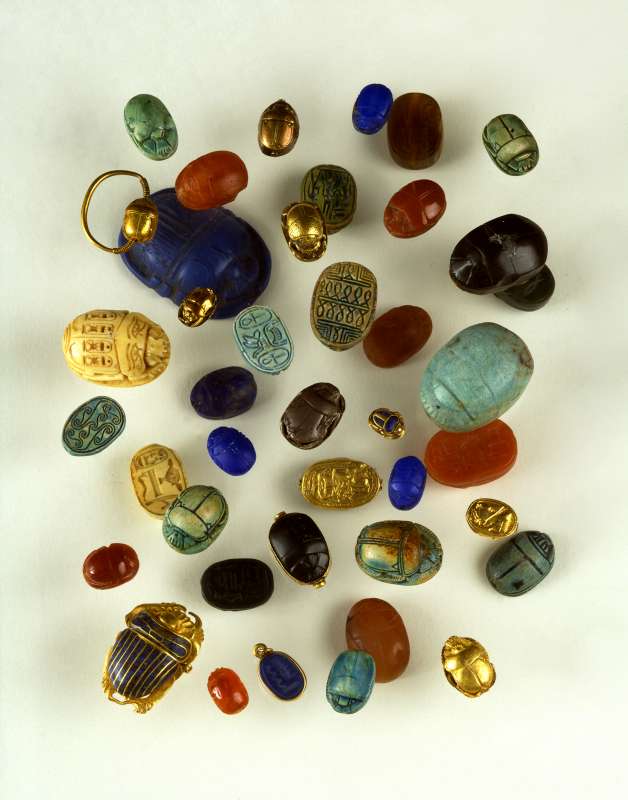 The scarab, an amulet shaped like the Scarabaeus sacer (dung beetle) - hence its modern name - was a primary symbol of regeneration in ancient Egypt. The Egyptians associated this beetle rolling its ball of dung with the sun-god rolling the sun-disk, reborn every day in heaven. Moreover, the mistaken notion that these beetles could spontaneously reproduce linked the beetle to the primary god of creation. Scarabs thus became very popular funerary amulets, thousands of them originating from Egyptian tombs or habitation areas of the second and first millennia BCE. The flat base of the scarabs, often inscribed or decorated, misled early scholars into regarding them as seals. Some scarabs did bear royal names, private names, and titles of officials, and for a short period were actually used for sealing, as attested by clay seal impressions. However, it is now clear that scarabs were primarily used as amulets, and that their use as seals was secondary and limited to a short period of time. Scarabs were made of a variety of materials, many of them believed to possess magical properties. The most common were glazed steatite and faience, but semiprecious stones such as amethyst, jasper, carnelian, lapis lazuli, agate, and feldspar were also used, along with, less frequently, gold, silver, bronze, glass, and ivory.