One glass bowl, two plates, and their wrapping 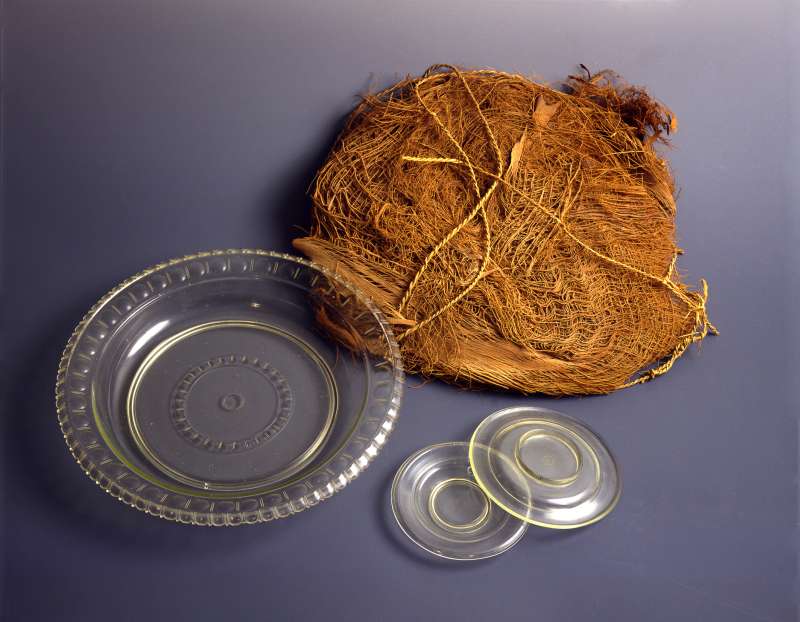 One glass bowl, two plates, and their wrapping

During the second war of the Jews against the Romans, the Bar-Kokhba Revolt of 132-135 CE, a group of people escaped from the Dead Sea settlement of Ein Gedi to find temporary refuge in a neighboring cave, where they ultimately perished. When the site was excavated in 1961, public and private documents, everyday objects, and personal effects taken by the fugitives were discovered. One parcel, consisting of palm fibers tied with a cord, contained a glass bowl and two small plates, all remarkably well preserved. The bowl was made in a mold, and the facets and decoration of the rim were carved using the engraver's wheel. The vessels were highly polished to a sheen that is still apparent. Popular during the second half of the first century and the first half of the second century CE, these molded and wheel-cut vessels made of colorless glass found all over the ancient world probably emanated from the workshops of Alexandria, Egypt. One of the refugees in the cave was an affluent woman named Babatha, whose personal documents, found in a leather pouch, reveal that she was a keen businesswoman. We may assume that these costly plates belonged to her.