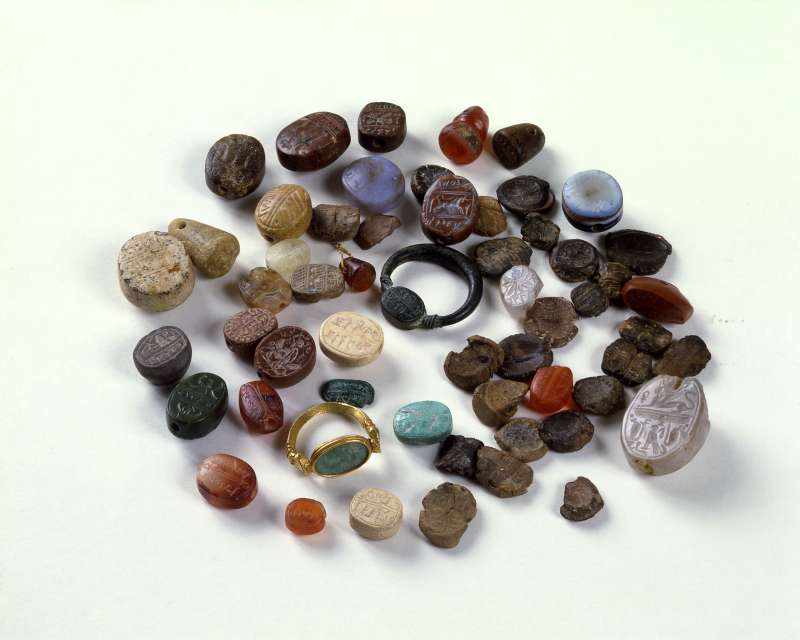 In ancient times, when only a small minority of people could read and write, the seal impression was used as a mark of ownership and as a means of authenticating documents, just as the signature is used today. The seals are usually made of semi precious stone or hard limestone, and a few are carved from bone, glass, bronze, or silver. Archaeological evidence shows that pottery vessels containing wine, oil, or valuables were closed with clay stoppers which were then stamped with a seal. Papyrus documents were rolled up, tied with a string, and secured with a lump of wet clay on which a seal was impressed (bulla). Great importance is ascribed to the seal in the Bible: it was the symbol of the king's authority, appearing on all royal edicts (I Kings 21:8). Seal inscriptions were carved in mirror writing, so as to appear correctly in the seal impression. The seals bear the name of the owner, generally with the father's name appended, used as a sort of 'family name.' Some seals also bear an ornamental design. A particularly important group of seals is inscribed with the names of ministers or other royal functionaries, many bearing titles or names that are mentioned in the Bible.