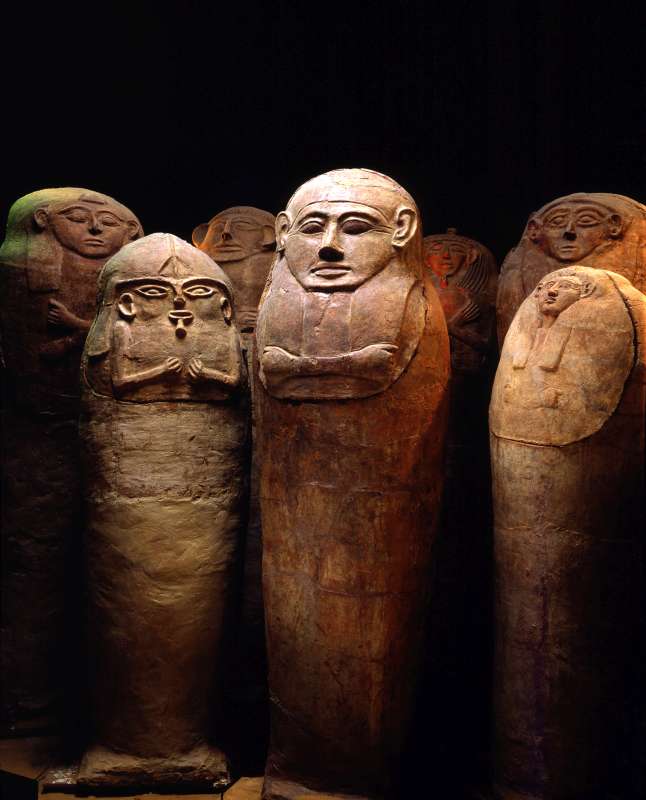 Gift of Wilma and Laurence Tisch, New York, to American Friends of the Israel Museum

South of Gaza city, at Deir el-Balah, some fifty pottery sarcophagi were unearthed from a large, ancient cemetery. Located near the sea, the site had been protected from plunder by massive sand dunes. The sarcophagi were fashioned by hand, using the coil technique, the method employed for creating large vessels. They were then fired with their lids in an open fire. The lids were later refired in kilns located nearby, which accounts for their darker color. Similar cemeteries have been discovered near the Nile Delta.

Several features of the Gaza sarcophagi shows clear signs of Egyptian influence. At times the lids bear depictions of mummy-like figures, indicating the face, wig, arms, and hands of the deceased. Many of the faces have small beards, perhaps symbolizing the beard of Osiris, the Egyptian god of death, into whose realm the deceased was about to enter. The bodies of the dead, usually more than one, were laid unembalmed in the coffin, along with funerary gifts such as pottery food bowls. If the deceased was wealthy, elaborate jewelry and vessels made of stone and bronze were also added.