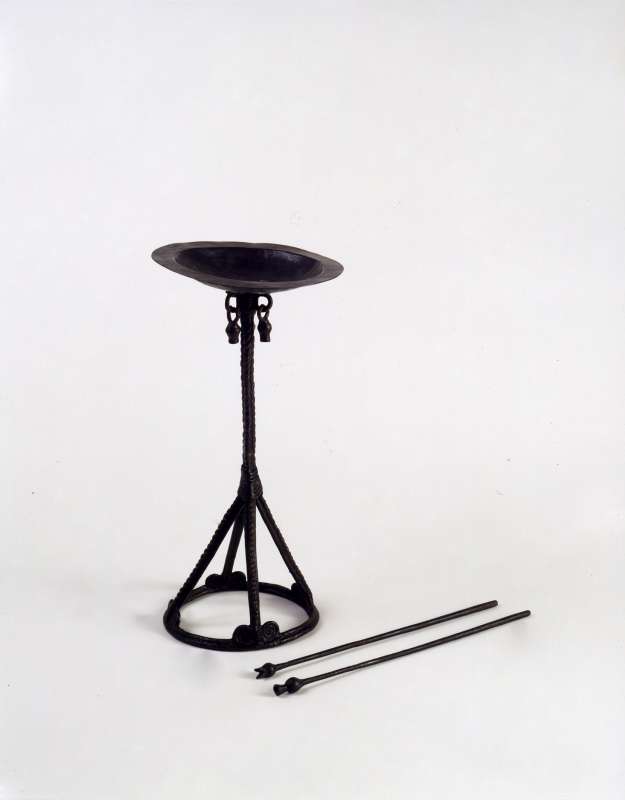 At a large, ancient cemetery site about 15 km (9 miles) south of Haifa, excavators found an intact tomb which contained two incised bronze scepters lying next to the skeleton of a man. One is surmounted by a pomegranate, the other by an opium poppy pod. An imported vessel from Cyprus which still contains traces of opium proves that the opium poppy was known in the Land of Israel in the late Canaanite period. The pomegranate and the poppy were symbols of abundance and fertility and their appearance may indicate that this was the burial of a priest. Also found in the tomb were two bronze incense stands, one of which has three opium poppy pods hanging like bells from the bottom of the bowl. A second stand is in the shape of a woman (caryatid) carrying an incense bowl on her head. A third stand, from a different tomb, is decorated with petals. All three are made of cast bronze sections soldered together, to which is attached, with bronze nails, a bowl hammered from bronze sheet. Combinations of incense, such as myrrh and frankincense, were originally placed in the bowl. The use of such incense burners is illustrated by an Egyptian relief depicting a Canaanite ship on which a merchant can be seen offering incense to the gods in order to ensure a safe voyage.