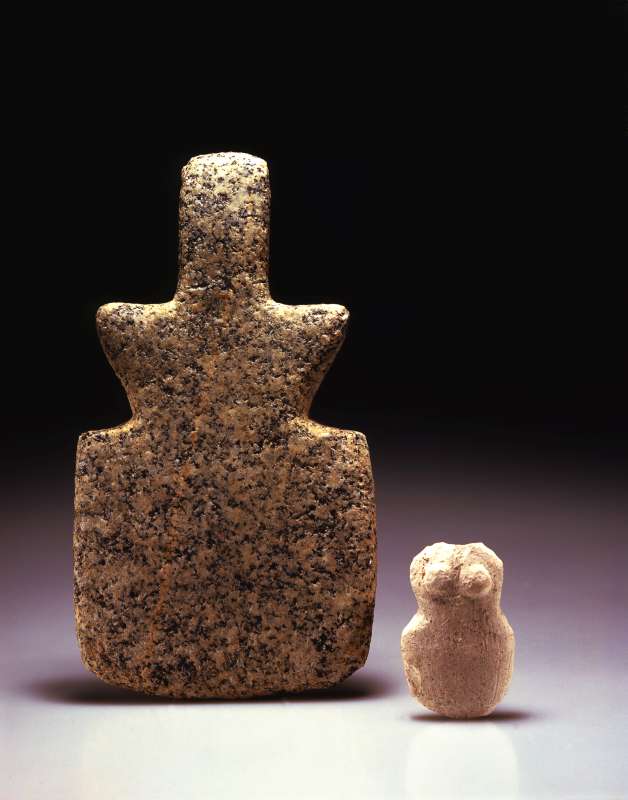 A 6,500-year-old temple that had been the center of worship for the agricultural settlements in the vicinity for over a thousand years was discovered at the northern Negev site of Gilat. It revealed some sixty stone violin-shaped figurines of a type unknown from either before or after the Chalcolithic period. The sculptures have three defined body parts - head-neck, shoulders-waist, hips-thighs - producing an abstract form with a uniform shape; only the proportions vary. The figurine on the right has marks indicating breasts, which may suggest that the sculptures represent a type of mother goddess or female fertility deity. From two remarkable pottery sculptures also found at the temple, it is clear that the artisans of the time were capable of producing detailed, naturalistic objects; which indicates that the violin-shaped figures must have been fashioned intentionally in an abstract manner. A different kind of violin-shaped figurine has been found on the Cyclades in the Aegean, though the earliest examples in that group are only 5,300 years old - 1,200 years later than the Land of Israel finds. This cultural connection remains a mystery.