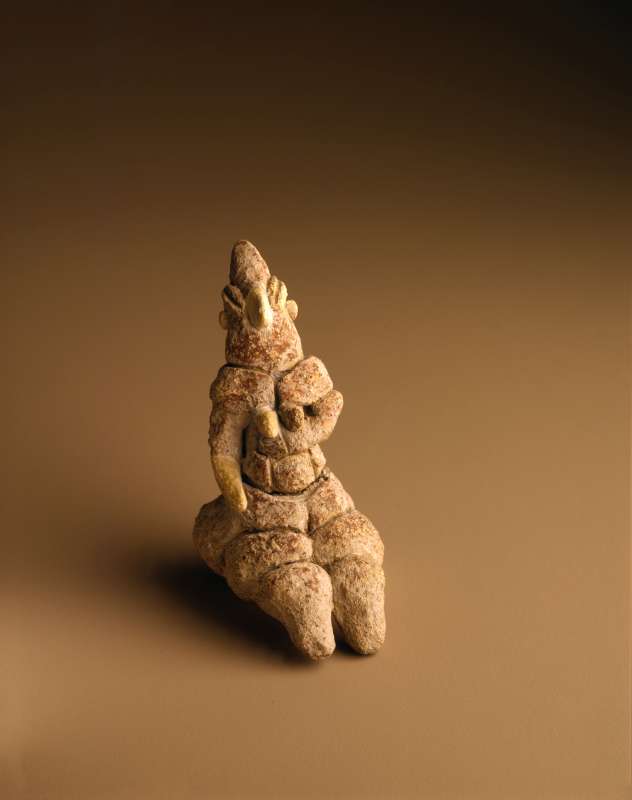 Though depictions of the human form are known in the Levant from the beginning of the Neolithic period (8th millennium BCE), this female figurine from two thousand years later is the most impressive example of its kind as yet uncovered. The cult of the Mother Goddess was widespread among ancient civilizations and, in keeping with other early female representations, the fertility attributes of this figurine-wide hips and enlarged buttocks-have been emphasized. Her triangular head rests directly on her shoulders while her bent left arm supports her relatively small breasts. The right arm, now restored, hangs straight down. The sculpture was made by wrapping a layer of clay around a cylindrical clay core, and adding the separately made body parts. Details, such as the garment covering the shoulders and back, oblong pellet-shaped eyes ("coffee-bean eyes"), and the ears, are indicated by applied bits of clay. Archaeological evidence places the figurine within the Yarmukian culture, which flourished in the sixth millennium BCE, when agriculture and pasturage were beginning to develop in the Levant. Though it was found during an excavation of Horvat Minha (Munhata), south of the Sea of Galilee, parallels exist in a figurine from Kefar Giladi and other sculptures from Sha'ar HaGolan, Megiddo, Tel Aviv, and Byblos.