Woman in Front of the Sea 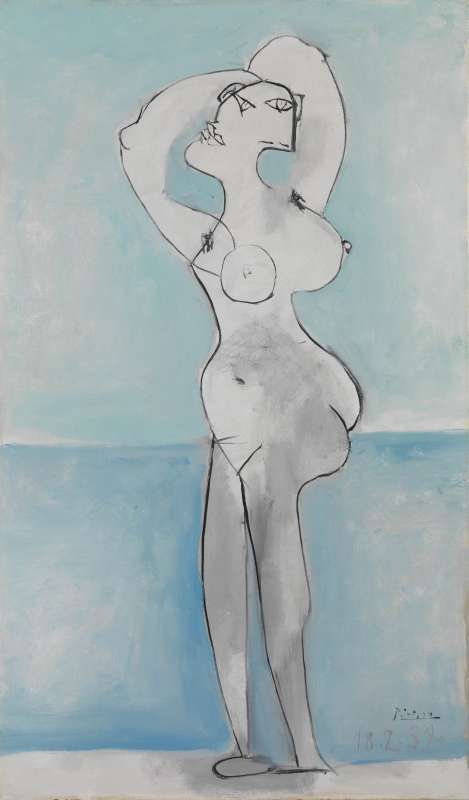 Woman in Front of the Sea

Picasso usually spent the summer months by the sea, and his oeuvre is replete with bathers and seashore scenes. It was in Paris, however, that he created this ethereal image of a ghostly Woman in Front of the Sea, awash in shades of blue fluids and air.

Like many other Picasso images, the painting’s origins are most likely rooted in his personal biography. In January 1939 Picasso’s mother died in Barcelona: she apparently lost her balance while dressing, fell, and broke her spine. At the time of her death, Barcelona was under siege by Franco’s army, and Picasso could not return home for the funeral. Instead, he embarked on an etching, Woman with a Tambourine, whose early states show a woman standing on one leg in a position of impossible imbalance. It seems likely that, as art historian Brigitte Baer has maintained, this image is connected to the circumstances of his mother’s death.

In its depiction of the figure’s head and upper body, Woman in Front of the Sea bears a very strong resemblance to Picasso’s precariously poised Woman with a Tambourine. In the painting, the lower portion of the body is reversed, while the most meaningful difference lies in the placement of the feet. Both feet are now very firmly planted on the ground. Perhaps Picasso has here come to terms with his mother’s death, imagining her exalted, standing firm with her head and arms aloft, and wrapped in diaphanous azures.