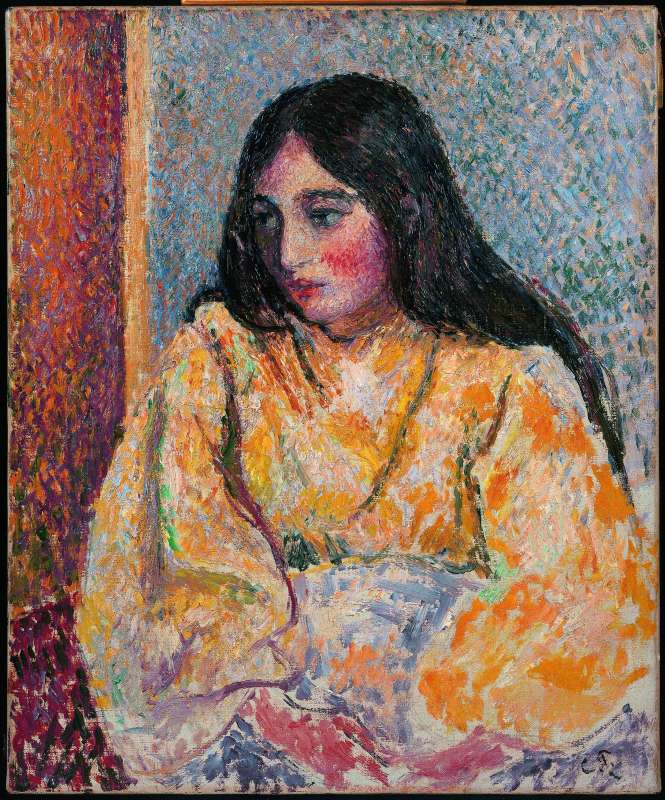 Bequest of Blanche T. Weisberg to American Friends of the Israel Museum

During the last decades of the nineteenth century, the photograph rapidly replaced the painted portrait as the public’s preferred medium for recording an accurate individual likeness. The Impressionists, dedicated to the depiction of fleeting, optical reality presented objectively and without commentary, also had their own reasons for being ideologically opposed to the traditional, posed portrait. Nevertheless, virtually all the Impressionists painted portraits. These works, however, differed from their predecessors in that they were usually not commissioned and almost always represented people intimately connected to the artists.

Pissarro, having a strong aversion to sentimentality, artificiality, and the anecdotal, understandably shied away from portraiture in general, and especially from the academic clichés associated with it. Less than five percent of his total oeuvre can be described as portraits. Though few in number, these works permit an ongoing, intimate insight into the life of an artist who otherwise eschewed the obviously personal in his work. Pissarro’s portraits include paintings of his friends, his relatives, and a small number of colleagues with whom he developed special relationships, such as Cézanne and Signac. Most, however, were of his immediate family: his wife Julie, his mother Rachel, and most particularly, his children, with whom he was always deeply involved. It would have been natural for Pissarro to use those closest to him as models, and the portrait chronicle of his children growing up most probably had personal meaning for him.

Though Pissarro’s children (he had eight, three of whom died while still young) were no less high-spirited than other youngsters, nothing of this nature finds its way into his portraits of them. They are usually shown indoors, isolated in front of a wall or in a portion of a room. When they are engaged in an activity, it is a sedentary one, usually reading or writing. These quiet pastimes serve as logical pretexts for the figures’ self-absorption and detachment, while offering the artist a model who is stationary, yet unposed. Most often the artist’s children appear withdrawn, lost in their thoughts, apparently unaware of the artist or the viewer.

Portrait of Jeanne depicts Pissarro’s only surviving daughter, Jeanne Marguerite Eva, nicknamed Cocotte. Her older sister, for whom she was named, Jeanne Rachel, nicknamed Minette, had died in 1874 at the age of nine from a respiratory ailment. Cocotte (b. 1881) would be about twelve years old here, just on the brink of puberty. She wears a loose-fitting, long-sleeved yellow dress and her lap is covered with a mauve coverlet. Her head is in three-quarter view, a position favored by Pissarro for portraiture. This slight turn to the side distances the subject from the viewer while taking full advantage of the subtle interplay of light and shadow over the features. Vestiges of Pissarro’s Neo-Impressionist involvement are still present here in the high-pitched palette, the striking color contrasts, and the dense crisscross strokes used in part of the background.