The Cliff of Aval, Etrétat 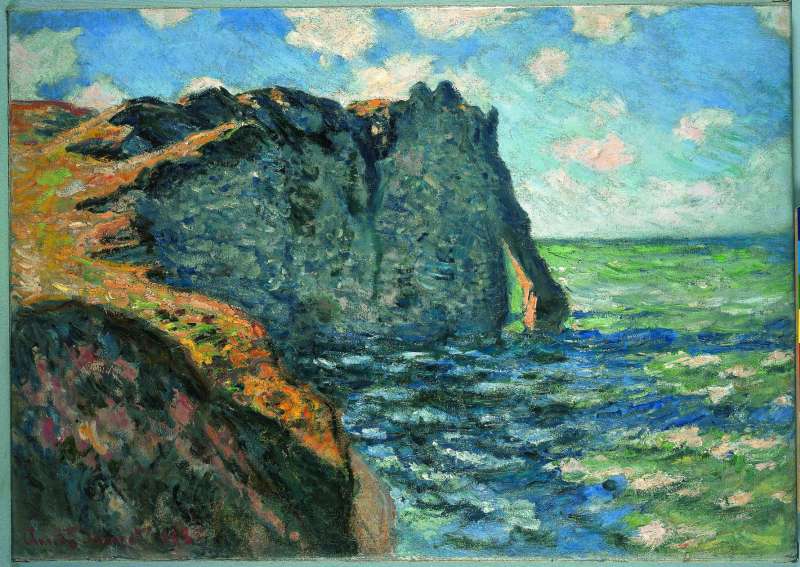 The Cliff of Aval, Etrétat

Claude Monet spent most of his youth in the port city of Le Havre. There he exhibited amusing depictions he had painted of local characters in the window of a framer’s shop. Eugène Boudin, who was showing his seascapes and beach scenes in the shop at the same time, recognized the young man’s talent and encouraged him to progress to serious painting. With money he had saved from the sale of his caricatures, Monet went to Paris in 1859, and began to study painting, drawing from live models at the Académie Suisse, where he met Pissarro. His studies were interrupted by a call to military service in 1861, but he was released a year later due to illness. At home in Le Havre he met the Dutch landscape painter Johann Barthold Jongkind, whom he credited with “the final education of my eye.” Both Boudin and Jongkind impressed upon him the importance of painting in the open air, before the motif. Later, when he returned to Paris, he registered at the studio of Charles Gleyre, where he met Renoir, Bazille, and Sisley.

Being a local native, Monet was familiar from childhood with the seaside villages along the coast of Normandy. He returned there frequently, both as a young and a mature artist, to paint the area’s famous cliffs and beaches. In the mid-1880s, he focused on the fishing village-turned-resort of Etretat. During the years from 1883 to 1886, he executed more works there than in any other place outside of his home in Giverny. There are some seventy-five known paintings of Etretat from this period, about fifty of which can be dated to the fall and winter of 1885-1886, among them the Israel Museum’s The Cliff of Aval, Etretat.

Around the 1830s the Normandy coastline was “discovered” as a vacation area by a small number of writers and artists. By the time Monet came of age in the 1860s the small fishing villages had been completely transformed by tourists. To accommodate the influx, hotels, casinos, inns, and villas were built, and travel books advised summer visitors of sites to see and paths to take. Thus, in the 1880s, when Monet began to work in Etretat, the views he chose to paint would have been well known to his audience. According to Robert L. Herbert, who chronicled Monet’s painting on the Normandy Coast,1 the artist was interested, for commercially related reasons, in capturing a familiar image, albeit investing it with his own special sensibility and technique.

In earlier works painted at Sainte-Adresse and Trouville, Monet had depicted the people and environment of resort life. None of this narrative type of representation finds its way into the Etretat paintings. On the contrary, the views he chose for these works eschewed all vestiges of tourism. Instead, Monet emphasized his own personal response to the imposing natural phenomena before him by zeroing in on the cliffs alone and ignoring the buildings and visitors that reflected the changes the site had undergone. Monet’s representations of Etretat are heroically romantic; at the same time his bold, evocative brushwork and unusual compositions imbue these works with a totally modern aspect.

In The Cliff of Aval, Etretat, as in other paintings of this site, Monet presents the massive precipice with its pierced arch that had by then become an easily recognized image. The vantage point for this view was a path about midway up the cliff of Aval. In this painting, the Needle, a detached spur that towers some 225 feet high and frequently appears in Monet’s Aval views, is hidden by the cliff. Despite the familiarily of the scene, the presentation is startlingly fresh in conception. Monet draws the viewer in close, exploring the cliff in a multitude of strokes and touches that activate its surface and reflect the shifting effects of water, wind, light, and air. His expressive brushwork and vibrant colors suggest an instinctive response to the drama of nature. This personal approach is further manifested by the extreme sensitivity with which Monet captures the way the sun illuminates a part of the cliff, and the lapping of the water against the rock face. Although Monet still sometimes finished works on the spot, by the time he painted The Cliff of Aval, Etretat he was frequently completing works begun outdoors in his studio. Dates on these canvases, therefore, probably tell us when they were begun rather than when they were completed.