Man in the Open Air 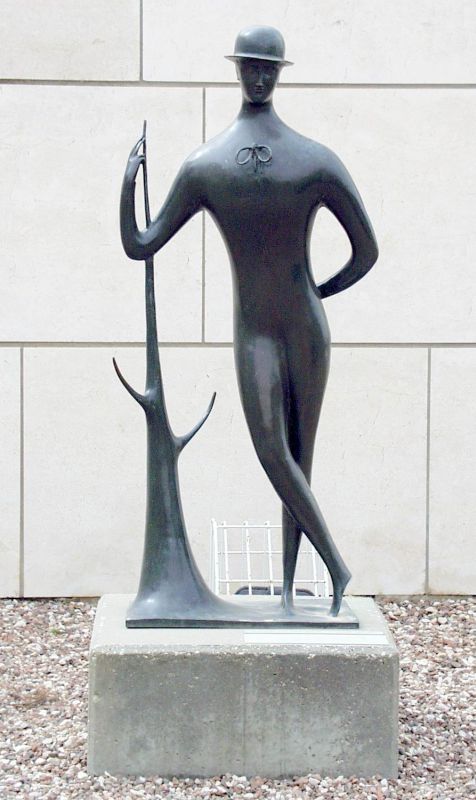 Man in the Open Air

A pioneering modernist sculptor, the Polish-born Nadelman engaged in a distinctive dialogue with tradition, drawing on classical Greek and Hellenistic sculpture, Italian Mannerism, the graceful Art Nouveau line of Aubrey Beardsley, and the strictly composed figures of Georges Seurat. He translated the human body into elegant, stylized elements that flow easily from one to the other. Man in the Open Air was the first large work he sculpted in the United States. A Mannerist influence is evident in the long, sinuous limbs, which are almost completely lacking in anatomical detail - barely distinguished, in fact, from the branches of the tree on which the figure leans. The overall pose, the hat, the tie, and the legs delicately poised on tiptoe all suggest - with a wink and an ironic smile, perhaps - a portrait of the modern dandy.

The sculpture is a forerunner of the whimsical figures that established Nadelman’s reputation. He found his subjects in his day-to-day surroundings and sculpted them in wood, plaster, and bronze. As representational as his works surely are, Nadelman insisted that his focus was elsewhere: “The subject of any work of art is for me nothing but a pretext for creating significant form, relations of forms, which create a new life that has nothing to do with life in nature, a life from which art is born, and from which springs style and unity” (quoted in John I. H. Baur, The Sculpture and Drawings of Elie Nadelman, 1882-1946 [New York, 1975], p. 7).