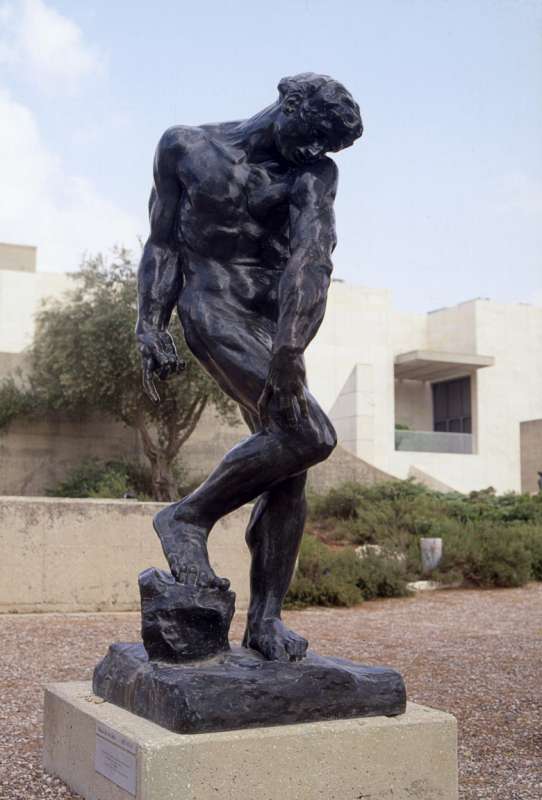 In 1880, Rodin received the commission for the main entrance portal to a proposed Museum of Decorative Arts in Paris. Because of the tremendous challenge presented by this work, which would combine sculpture and architecture, Rodin estimated that he required three years for its completion. In fact, Rodin never completed this monumental work, which preoccupied him from 1880 to 1900 and remained a source of fascination and anxiety for the rest of his life. Incorporating 186 sculptured figures, Rodin’s Gates of Hell is one of the great achievements of the human imagination. These figures and groups destined for the doors—though integrated into the relief— served as an inexhaustible supply of subjects and forms for most of Rodin’s creations of the 1880s and 1890s. The artist imaginatively combined, juxtaposed, enlarged and reduced figures and parts of figures to form new, vital, independent works, such as Adam (1880), Eve (1881), and The Kiss (ca. 1884).

Rodin returned from Italy in 1876, greatly inspired by the works of Michelangelo, and immediately began work on a figure of Adam. He abandoned his first study, however, considering it too imitative of the master’s style, and only returned to the subject four years later. Michelangelo’s influence nevertheless remains evident in the final result, particularly in the muscularity and monumentality of Adam’s physique. Rodin’s model was a strongman from the circus, whom he chose for his power and “iron jaw.” Adam’s right arm with its outstretched forefinger alludes to the pose of Michelangelo’s Adam on the ceiling of the Sistine Chapel as he awaits the touch of life from the hand of God. Aware of this parallel, Rodin also entitled his Adam The Creation of Man. Adam’s left arm hangs in emulation of Michelangelo’s Pietà in the Opera del Duomo Museum in Florence. The figure steps up from a stone, probably representing the earth from which Adam was created, his body twisted in a serpentine posture. Rodin’s special ability to express emotion through movement is conveyed through this single figure, whose “agonized body dramatizes the suffering of earthly existence between its beginnings and end.”

As he worked simultaneously on Adam and a figure of Eve, Rodin decided to incorporate them into The Gates of Hell. He envisioned the two figures flanking the gates, indicating that their fall from grace paved the way for eternal damnation - the central theme of The Gates. Eve is depicted immediately after her fall from grace, with her head hung low, the epitome of guilt. Her arms are wrapped around her body in a pose evocative of Michelangelo’s Eve in the Sistine fresco The Expulsion from Paradise. Rodin’s Eve is less distinctly sculptural than his Adam, possibly because the model became pregnant and never finished the sittings. Rather than hiring a new model, Rodin made Eve’s body less defined and whole areas, notably the belly, were left rough and unfinished.

Although closely linked in pose and composition to Rodin’s Adam, The Shade (1880) appears less dynamic; the force of gravity is heightened in the downward pull of the neck and left arm. The Shade also alludes to Michelangelo’s Dying Slave, which Rodin saw and drew in the Louvre, and conveys the same sense of despair and futility. In the mid-1880s Rodin decided to crown The Gates of Hell with three identical casts of The Shade. Each was placed at a different angle but all pointed to the infernal drama unfolding below, as though voicing Dante’s warning to the damned: “Abandon all hope, ye who enter here.”