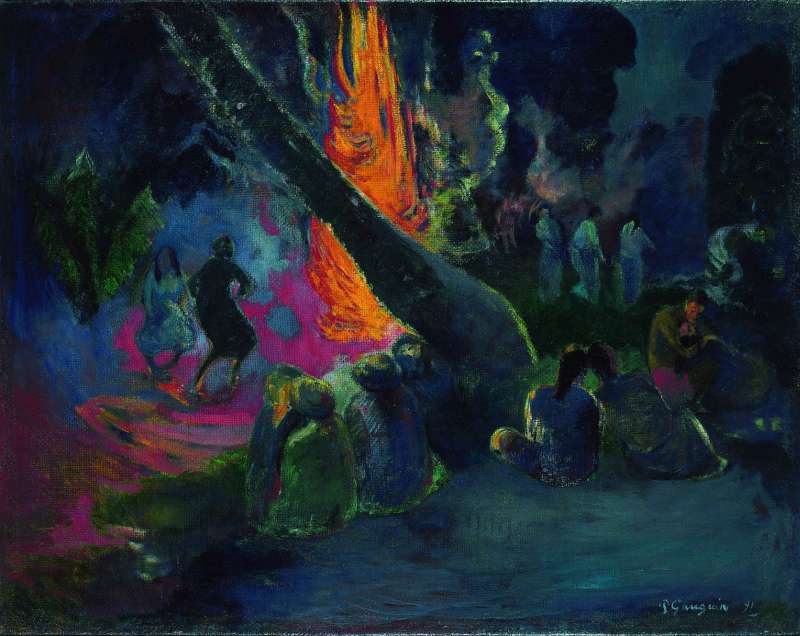 In April 1891 Gauguin left France for Tahiti, arriving in the capital, Papeete, in June only to discover that he had no hope of finding the primitive lifestyle, tribal art, and pagan religion that he craved. The capital was provincially colonial, missionaries had destroyed Tahitian art, and the natives were Christian. Instead of admitting defeat, Gauguin reinvented the lost world he sought. He explored Tahitian religion in a French book, studied Marquesan art in French collections, and adopted a native lifestyle in Mataiea, a village far from the capital.

Upa Upa is Gauguin's first attempt literally "to recover a trace of this so distant, so mysterious past; to rediscover the ancient hearth, to revive the fire amidst all these ashes." Painted in Papeete or soon after he moved to Mataiea, it documents a native dance that the French had banned because of its erotic movements—opening and closing the thighs while the knees are bent, as demonstrated by the dancers on the left. Gauguin could have seen such dance movements in Mataiea, where there were fewer restrictions, or at outdoor public dances in Papeete, where, when the music commenced, "natives begin to leap about clumsily in front of the pavilion. Their twists and turns are greeted with taunts and laughter." Defying this colonial attitude, Gauguin chose the title Upa Upa to stress his appreciation of native culture, and reused these motions in his paintings of idol worship. Since Tahitians and Europeans picked partners for the night at such dances, Gauguin portrayed two pairs of lovers on the right.

Gauguin based the diagonal tree and foreground spectators on Vision after the Sermon of 1888, his first treatment of Breton religious beliefs. Yet the atmosphere is entirely different: the purples, greens, and deep colors of night set off the column of leaping flames that illuminate the dancers, and the latter are much more important than the spectators. The dancers on the left stand out against the area lit by the bonfire. They perform the upaupa against a background of trees, watched by the spectators. The situation on the right is different: the flames leap to unreal, monumental proportions. To the right, three ghostly dancers perform a less erotic "barbaric" dance, framed on the right by an undelineated statue whose base is highlighted, and on the left by an awe-inspiring form, as large as the flames that illuminate it, evoking a monster with bulging eyes, chest, and stomach. That this image was consciously produced is shown by a 1894 woodcut, Te Faruru (Here we make love), where a smaller, less threatening "spirit," cut in fine lines with a well-defined face, hovers above the embracing lovers from the painting. In this half of Upa Upa, Gauguin tried to recreate Tahiti's "mysterious past," but having as yet no knowledge of it, he expressed it through the flames and the dancing before the “spirit" and the indistinct statue.

When he copied this composition into a woodcut in 1894, he alluded to this side of the painting in the title, Mahna no varua ino (Day of the Evil Spirit), but excluded the whole scene. By then he had created clear idols and images to portray the Tahitian rites and myths he had envisioned.